The Other Side Of The Good War: A Book Review

Wars start with cheering and parades and the belief that the conflict will be short because God is on their side. When the smoke clears and combatants sign the treaties the war is considered over. For those who fought it, the victors and the vanquished alike, it is over when they die. They live with it the rest of their lives. The ghosts are never at peace. The book by Dale Maharidge, Bringing Mulligan Home: The Other Side of the Good War is about his father’s experience in World War II, and the battles he fought until he died.

Sargent Steve Maharidge was a Marine who served in the South Pacific in World War II. He returned home with an explosive rage and a photograph of himself and another Marine. Steve kept the photograph in an easily visible in a spot in his workshop.

Something as trivial as a spilling a glass of water could invoke the rage. On one occasion his explosion went over the line and Steve injured his wife. She told him if it did it again, she would leave. After that his rages went to the line, but didn’t cross it. His anger wasn’t necessarily directed at his family, but an unseen demon. Steve had mellowed by the time he died in 2000. Steve’s son Dale thought his father was at the point he would have been if he hadn’t been in the war. He would have been a nice guy.

Dale Maharidge is a Pulitzer Prize winning reporter and decided to find out about his father, and felt the key was in the photograph. When Dale was 10 he observed his father screaming at the picture, “They said I killed him! But I didn’t kill him! It wasn’t my fault!” The picture was taken on Guadalcanal and the other man was Herman Mulligan. Bringing Mulligan Home: The Other Side of the Good War is the result of the search that took Dale Maharidge 12 years to complete.

Dale Maharidge’s Search For The Ghosts

When they were alone in the workshop, Steve would mention things about the war. Dale knew not to just listen. The things he mentioned weren’t big, but little things.

L Company was part of the third Battalion, 22nd Marines, sixth Marine Division that fought in the Pacific during World War II. Dale’s search for the demons was to locate as many survivors that knew his dad and Mulligan as he could. Several had died in between 1946 and 1950 from alcoholism and suicide. The ones he found weren’t willing to talk. They were hesitant, uncommunicative and often hostile. Dale was persistent, and one of the openly hostile L Company survivors told him more about the war than he had ever told anyone. 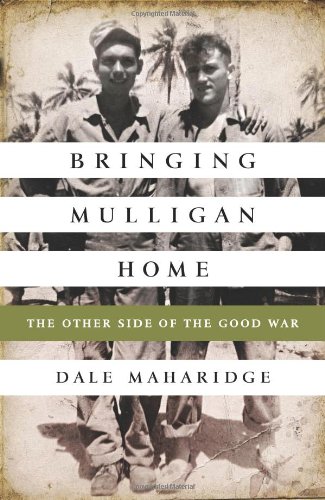 Conversations with Dale’s fathers L Company comrades gave him a deeper understanding of his father. In most cases, it was the most in-depth discussions they had had with anyone about their military experiences. After his search for his dad’s comrads, Mahridge estimated that two-thirds of the company was dead. Dale found six men who were present when Mulligan died on Okinawa. The man who carried Herman Mulligan’s dead body said it was the most he had ever told anyone about wartime experiences.

Mulligan was a hemophiliac and died from an explosion. He had thrown a hand grenade into what turned out was an ammo dump. No one knew until after the explosion. Some thought Steve had ordered Mulligan to throw the grenade that caused the explosion. Steve suffered a concussion from the blast. It was one of two concussions Steve received during the war.

Dale found Herman Mulligan was listed as missing. There isn’t a record of where the body rests. Dale went to the site of the explosion and had his own memorial service for his father’s friend. During his research, he never found any Herman Mulligan descendants.

Analysis of modern war wounds and concussion injuries from those sustained by National Football League players leave little doubt these injuries can produce violent rages. Dale’s father had two major concussion injuries and lived with the after effects the rest of his life.

What Dale found is relevant to today’s warriors. Readers of Dale Mahdridge's book who have relatives, friends, and lovers in the current wars have written Dale with stories similar or identical to his fathers. They are grateful for reading the book as it helps understand what combatants go through and what friends and relatives might expect. This is a common story for those who have fought and are fighting in war.

The concept of concussions effects on the brain are becoming better understood because of war injuries and information the about NFL players concussion results. This book helps a person better understand PTSD effects on a soldier.

Since the book has been published Dale has received email, letters and other communications from relatives thanking him for the book. It has helped them understand what their veteran is going through, and explains behavior they didn’t have before their combat experience.

This is a well written book by an award winning journalist that gives insights into war, not from those in the upper ranks, but those that suffer through questionable decisions made by those in the upper ranks. Bringing Mulligan Home: The Other Side of the Good War is often a harrowing book to read, but is a must read by anyone who is a student of war. It is a loving tribute written by a son to his father.