If you love to write and would like to make some money doing so, sign up to infobarrel today, so you can start earning cash for doing what you love. Rock on! Sign up now at the link below:  http://www.infobarrel.com/signup.php?ref_id=2544112
InfoBarrel is a writing platform for non-fiction, reference-based, informative content. Opinions expressed by InfoBarrel writers are their own.
InfoBarrel > Lifestyle > Religion & Spirituality

The Wheel Of The Year

Holidays on the pagan calendar are centered around recurring aspects of the Sun as it relates to the Earth throughout the year. Since these dates are often represented in a circle, such a calendar is also known as the wheel of the year.

The word pagan refers to any of the Earth-centered spiritual traditions that have existed from before the advent of widespread institutionalized monotheistic religious organizations until the present day. The term is often considered to define any pre-Christian religion, although that would be only partially true, since paganism simultaneously predates many other centralized religions.

In general, paganism expounds a belief in the interconnectedness of humanity with nature and considers the Divine creative force to be the Spirit of the Universe which manifests as a balance between male and female energies. Paganism is not against any other religion, and can easily coincide with the beliefs of a multitude of faiths.

The pagan calendar highlights eight holidays or pagan sacred days of the year and is cyclical in nature. The eight pagan holidays are Samhain, Yule, Imbolc, Oestara, Beltane, Litha, Lammas, and Mabon. These sacred days are based on the patterns of the Sun and its relationship to the Earth throughout the course of one calendar year.

These times were important to ancient societies that depended greatly on planting, hunting, and harvesting for survival. Therefore, the pagan wheel of the year marks those times that follow the Sun's journey as it affects the growing season and its complimentary times of rest in winter and harvest in summer and fall.

To follow and understand the eight sacred days of the pagan calendar is to be in tune with the Earth, the Sun, and all of the seasons that the relationship of the two create for all life on our planet.

Samhain (which is pronounced sow-when) is a Celtic word that translates as summer's end. It is celebrated on October 31 and is the origin of our modern-day Halloween. Samhain is between the Fall Equinox and the Winter Solstice.

Traditionally Samhain is considered to be the night of the year when the veil between the spirit world and the physical world is the thinnest. Deceased relatives and friends in the spirit world are remembered and offered gifts of apples or other foods as they pass the physical plane on this night of such thin separation between the two realms. Jack-O-Lanterns were originally carved and illuminated at pagan doorsteps for two reasons. Their scary faces were lit to repel any ill-intentioned spirits, while their glowing candles would simultaneously attract welcomed spirits and helpful faeries.

Samhain was also the time of The Wild Hunt when mischievous faeries would descend from their homes in the forrest to wreak havoc in the towns and villages with all manner of tricks and hijinks. If you wore your clothes inside out or backwards, you would confuse the faeries and, hopefully, send them on to another victim. At the same time, children delighted in dressing as the frolicking faeries and goblins and striking deals with the townsfolk in exchange for promises to not harass them with bothersome faery magic. Costumes and Trick-Or-Treating on Halloween arose from these two pagan traditions.

Samhain is also considered the witch's new year, and people of Wiccan faith or other practitioners of pagan witchcraft recognize the holiday as the end of the old year and the beginning of the next.

Yule is celebrated on December 21 and it marks the Winter Solstice, or that day of the year when the night is longest. Since Yule falls halfway between the Fall and Spring Equinoxes (when the days and nights are equal in length) it is the midpoint of the darker half of the year. After Yule the days begin to slowly grow longer as Spring approaches.

Therfore, Yule has always been associated with the birth of the Sun so to speak. Evergreen trees were brought inside and decorated by Norse peoples as a symbol of the resilient nature of life as it makes its way through the harsh days of winter. Our modern Christmas tree is a continuation of this pagan tradition. It is a symbol of hope for the warmer days to come, and a way to connect with nature in our very homes.

It was also a common practice to burn the Yule log on this holiday. Traditionally, a piece of the Yule log was kept to start the fire on Yule next year. This tradition connects the passage of time and is a symbol of gratitude for the previous year, and hope for the next. 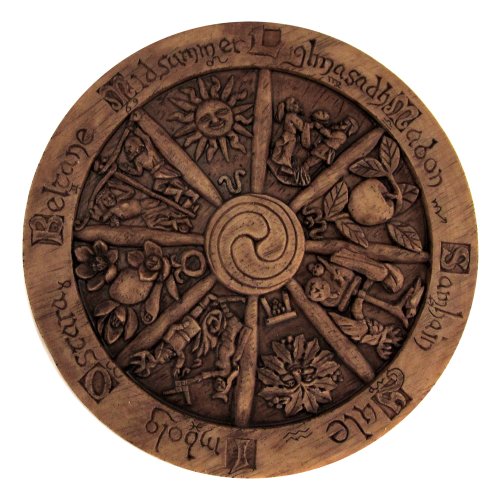 Small Wheel of the Year Wall Plaque Wood Finish Amazon Price: $21.95 Buy Now(price as of May 10, 2016)
This small (5 5/8'' across) round plaque depicts the eight holidays on the pagan wheel of the year. It is detailed and molded in resin from an original wood carving. It is finished to resemble the original wood, and its size makes it easy to display.

Imbolc (pronounced eem-bowlk) is a holiday of returning light that is a herald of spring to come. The name may come from an Irish phrase meaning in milk, which refers to the mother lambs who begin to give birth at this time.

The holiday was originally celebrated as a tribute to the Celtic Goddess Brigid who was the goddess of fire and passionate growth. The Goddess Brigid was canonized by the Catholic Church in the form of St. Brigid, who is the inspiration for Candlemas, or St. Brigid's Day.

A central theme to Imbolc is cleansing. It is a time to clean out the old to prepare for the new growth of spring. Spring cleaning has its origins in the festivals of Imbolc, as do the candlelit processions of modern spring parades.

Celebrated on March 21, the Spring Equinox occurs when the hours of daylight and darkness are equal. Following this day, the daylight hours grow longer and the growing season begins.

Oestara shares its name with the German Goddess, Ostara who was called Eostre by the Anglo-Saxons. These divine names are the origin of our words East and Easter. The names also share a similarity with the Phoenician goddess Astarte, who is a spring fertility goddess.

The egg, as a symbol of new life, was the symbol of Ostara and the decorating of eggs at this time of year dates to the Germanic tribes and their festivals held at the Spring Equinox to celebrate the return of the longer days and the life they bring.

Beltane is also known as May Day and is traditionally observed on May 1. Beltane is a joyful holiday that celebrates spring at its fullest. Celebrations of this holiday include decorating may poles with ribbon and bows, crowning a May Queen, and keeping a bonfire burning throughout the night until dawn.

Beltane is a time of new love, budding relationship, and the rekindling of longterm affairs. It is a time when old alliances are recognized and new partnerships are formed. May Day marks the halfway point between the Spring Equinox and the Summer Solstice, and is a time when the divine energies of male and female come together to bear the fruit that will sustain life for the remainder of the year.

Where observing Samhain may be a more private or individual practice, Beltane can be a time of the largest modern pagan festivals where community and social interaction are celebrated and enjoyed. 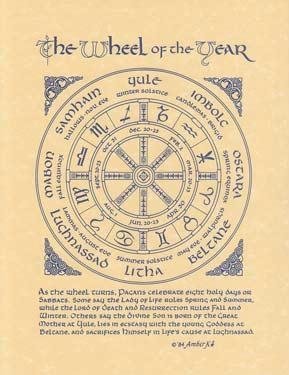 Litha resides on June 21 at the Summer Solstice. It is the time of year when the daylight hours are the longest. It is a time to celebrate the strength of the Sun, abundance, powerful growth, and generosity.

The night before Litha is known as Midsummer's Eve and is considered one of the most potent nights for the practice of magic. It is believed that faeries celebrate on this day, and their festival can be seen depicted in the famous 1908 painting Midsummer Eve by Edward Robert Hughes.

Also called Lughnassadh (Luna-Sah), Lammas is the celebration of the first harvest of grains for making bread. The baking of breads is, therefore, central to the celebration of Lammas. Traditionally, bread is shared at feasts that commemorate the Celtic God Lugh who is the patron of planting, the Sun, and harvesting grains.

It was Lugh who brought the secrets of planting and cultivation to the people, after defeating and older deity who had kept the knowledge hidden for himself. In ancient times, bread was broken into crumbs and scattered in the fields, to repay these gifts of knowledge given to mankind by this god of the harvest and farming.

Lammas is a holiday that recognizes sacrifice and sharing. It is a time of being grateful for both physical and spiritual harvests.

Mabon (or Madron) is the Fall Equinox and occurs on September 21 when the hours of daylight equal the hours of night. From this day forward the days grow shorter until spring begins. It is a herald of winter and a return to the darker, colder days ahead.

Mabon is a time when growth slows and fades. Where spring is a time of action and growth, Mabon is the onset of fall, and the restful reflection that prepares us for winter.

It is often the final harvest and  a time to preserve and prepare for the cold dark months ahead. Pagans celebrate Mabon with a feast, words and thoughts of gratitude, and the recounting of lessons learned.

Mabon is the time of fall festivals and looking forward to Samhain, which will conclude the wheel for that year, and begin the cycle for the next year to come. 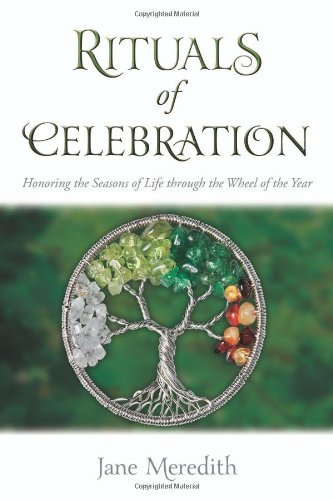 Rituals of Celebration: Honoring the Seasons of Life through the Wheel of the Year Amazon Price: $17.99 $9.79 Buy Now(price as of May 10, 2016)
This 5 star rated book features ideas and traditional lore to help you celebrate the sacred days that make up the wheel of the year.

The pagan calendar, or wheel of the year, is a cyclical marking of solar and harvest celebrations that extend from antiquity to the present day.

Many of our modern traditions, names, festivals, and holidays have their roots in the sacred pagan traditions of the old days. Pagan spirituality is not at odds with any tradition and its foundations are an interconnectedness between nature, humanity, and the divine male and female energies that create worlds.

To understand and follow the pagan wheel of the year calendar is to connect with the very Earth that we were all born from and live upon. It is a beautiful system of recognizing the interplay between the Earth, the Sun, the seasons, and our relationship to the never-ending occurrences that shape the world we live in. 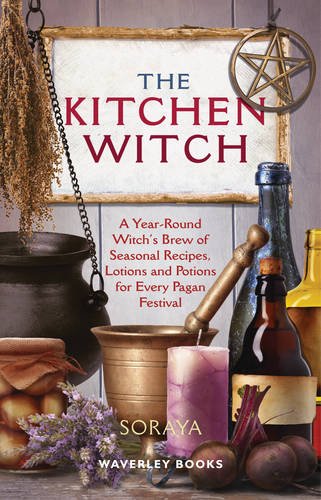