Joanne is self employed and loves to write about a variety of subjects, particularly health, food, pets and travel.
InfoBarrel is a writing platform for non-fiction, reference-based, informative content. Opinions expressed by InfoBarrel writers are their own.
InfoBarrel > Entertainment > People

The Partridge Family was a sitcom about a musical family that toured the country.  They travelled in an old school bus that was painted in bright, cheerful colors.

The series aired a total of four seasons.  It was popular viewing for young kids, along with The Brady Bunch, which aired the same evening.  Both shows were featured on the ABC network.  While neither series was a huge hit, they did have dedicated fans.  Their target audience was young kids and teenage girls.  Both programs are pop culture icons, and are featured on ME TV and Antenna TV.

Most people are familiar the cheerful 'C'mon get happy' song that introduced the program.  Shirley Jones played the widowed mom.  This was a departure from earlier sitcoms, as single moms were not common on TV at the time.  Earlier ones like My Three Sons featured men who lost their spouses.

Three of the actors who played the youngest children are no longer in show business.   Suzanne Crough, Jeremy Gelbwaks and Brian Forster gave up acting and now have successful careers in the private sector.  Jeremy was the original actor to play the youngest son Chris. He was later replaced by Brian.  Suzanne was Tracy.

This article will update what other cast members have done since the show ended its run.  This includes Shirley Jones, David Cassidy, Susan Dey, Danny Bonaduce and Dave Madden.

David Cassidy was one of the biggest teen idols from the 70s. He already had a fan base by the time he started to play Keith Partridge.  However, the series raised him to a major singing star. Young girls and teenagers were crazy about him, and many of them became hysterical at his concerts.

David started going on tours in the early 70s.  His concerts drew sell out crowds in the United States, Europe, and Australia.   At the height of his success, he performed six concerts at Wembley Stadium in London during a single weekend.

He tried to break away from his teen idol image, and longed to become a more mainstream musician.  This eluded him, however.  Eventually he came to terms with it.

A tragic event in 1974 would have a profound event on his life and career.  A gate stampede at one of his European concerts injured hundreds of fans.  It resulted in the death of a teenage girl.  David was very upset and disturbed that such a tragedy could occur.   A short time later, he decided to give up touring.

At this time he decided to focus on writing and recording music.  Three solo albums were released within two years, and all of them did well.  However, he still longed to break away from his teen idol image.  In the 1980s he released an album in Europe, Australia and Japan.  It was a major hit in the UK, and he followed up this success with a European tour.

A few years later, David would once again have success in the United States, although not to the same degree that he enjoyed in the 70s.  He also has performed in various musical theater productions in New York and London.  However, it has been a few years now since he performed.

David is in his 60s now and lives in New York state.  He is good friends with Danny Bonaduce.  Shirley Jones is his stepmother in real life.

Shirley has been in show business since the 1950s.  She was featured in popular musical films, including Carousel and Oklahoma.

It may have been a surprise to some that she accepted the role of Shirley in the Partridge Family.  However, by the 1970s she was finding movie roles were scarce.  She was offered but declined the role of Carol on the Brady Bunch.  However, she wanted to do the Partridge show because she believed it would be a hit.   It also meant she could be home in the evening.  At that time, she was raising three young sons.

Shirley said her agent warned her she would likely be typecast as the mother of the Partridge clan.  This could make it hard for her to find other roles in the future.  However, she has had no regrets doing the program, and has fond memories of those times.

She has returned to TV a few times since playing Shirley Partridge.  She received a lot of praise and was nominated for an Emmy for her role as a wife dealing with a husband suffering from Alzheimer's disease.

Shirley has also appeared in musical productions on and off-Broadway.  On two occasions, she has performed in productions along with her son Patrick.  Although she is almost 80, she still accepts occasional roles and is in good health.

Her autobiography has recently been published.  This book is a departure from her wholesome image.  She included a lot of stories about her marriages and personal details that perviously had been unknown.

Susan was just 17 when she won the role of Laurie.  After the program ended, she had trouble finding other significant roles.  Susan acted in TV movies and minor roles until she landed the part of Grace on LA Law in the 1980s.

The series was very successful for NBC.  The network dominated the ratings at the time with shows like Miami Vice,  Cheers and so on.  LA Law was given the 10 PM time slot after the Cosby Show and other top rated sitcoms.

The series lasted for eight seasons, although Susan did not stay with the show for its entire run.  She was nominated for several Golden Globe and Emmy awards, although she did not win.  Several years after LA Law was cancelled most of the original cast  reunited for a TV movie.  Susan did take part in this movie.

Aside from that, Susan has done very little acting since 2000.  Whether this is by choice, or she just hasn't been able to find roles is hard to say.  She lives a quiet life and has avoided the tabloids, unlike her TV brothers David Cassidy and Danny Bonaduce.

Danny played a wise cracking, easy-going character who was very popular with fans.  His happy home life on TV was in stark contrast to his real life.  Danny claims he was abused by his father for years.

After the series ended, he was broke and abusing drugs and alcohol.  He even ended up homeless for some time, and had to live out of his car.

Danny was arrested multiple times.  Two incidents in particular got a lot of attention.  He was often featured in the tabloids, as his exploits made headlines.

Danny has participated in boxing and wrestling events.  He's boxed with other former childhood stars, including Donny Osmond and Christopher Knight from the Brady Bunch.  He's obviously was very good at it, as he won those matches.

More recently,  Danny has hosted his own radio show.  He also appeared on a short-lived reality series called Breaking Bonaduce.   The program was a train wreck and did not last long.

Danny now lives in Seattle, where he hosts a weekday talk show.  He's married and living sober.  It's nice to know he turned his life around, as this is not the case with many former child stars.   He has remained close friends with David, Shirley, and Dave Madden.

Canadian born Dave had a long acting career, but was best known for his role as Reuben Kincaid, the long-suffering manager for the Partridges.

Dave was particularly kind to Danny, who was living in a very dysfunctional home at the time.  Danny lived with Dave and his wife for some time. Danny was very grateful for the help and support he received.

After the show ended, Dave played a recurring character on the sitcom Alice.  He also was a guest on other programs like the Love Boat.

He retired from acting and lived with his wife in Florida.  He wrote his autobiography and remained friendly with most of the Partridge Family cast.

Dave Madden died in January 2014 after a long illness.

The Partridge Family Series on DVD 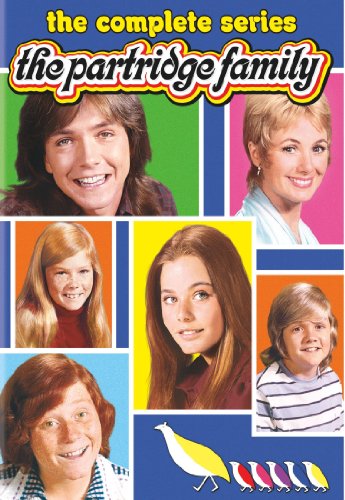 The Partridge Family: The Complete Series Amazon Price: $45.99 $24.99 Buy Now(price as of Dec 30, 2014)
This set includes all four seasons of the program.
Next >> Do Celebrity Endorsements Work? Five Brilliant Must-See Videos