Pendle Hill has become a Mecca for those interested in witchcraft. Every Halloween locals and tourists from all over the world climb to the top, and celebrate the holiday in the company of likeminded folk. The hill its self is impressive as it stands alone dominating the skyline overlooking the Ribble Valley in Lancashire England. The area in which it is found is an area of outstanding national beauty as recognised by Natural England; the British government’s advisor on the natural environment.

Having a stunning view at its peak isn’t the reason that Wicca followers flock to the location. Pendle Hill has long been associated with witchcraft, and it is the tale of the Pendle Witches that has made it such a popular location. That story of the Pendle Witches is one of secrecy, deceit, betrayal, exploitation, and tragedy. It is one of the most famous cases of witchcraft in British history, and it has been written about many times over the years.

In 1612 ten people were tried and found guilty of witchcraft; they were then hanged. The deaths reportedly accounted for more than two percent of the total number of people executed for witchcraft during that famous and tragic time. Nowadays the thought of anyone freely admitting to such a crime, in an era in which such an admission would mean almost certain doom, seems like madness. Circumstances were different then, and so many of the accused admitted their guilt.

Two families form most of the cast of this drama. Both were reputed to be run by maternal octogenarians; Elizabeth Southerns of the Demdike family and Anna Whittle of the Chattox. Both women were suspected to be witches by people in the local area, and neither denied such claims. At the time, in rural parts of the country, many people claimed to have supernatural powers in order to make a living by healing, extortion, and other such methods.

Trouble arose when Alizon Device, the granddaughter of Demdike, reportedly cast a curse on a pedlar named John Law. The curse apparently caused him to suffer a stroke. Authorities were called in to investigate the claims, and Alizon confessed. She claimed to have sold her soul to the devil, and under questioning she begged for forgiveness. During her interrogation several other people were implicated in witchcraft, including most of the Chattox family, and before long a web of murder and supernatural practices was uncovered. The Chattox and Demdike families appeared to have been in competition in the area, and both families seemed to implicate the other in more and more incidents that would eventually seal their fates; as well as the fates of many other people. 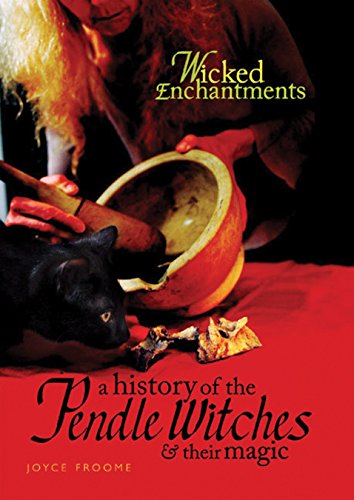 The subsequent trials were held at the York Assizes and the Lancaster Assizes in 1612. At York one of the accused, Jennet Preston, was found guilty and hanged on the 29th of July. The prosecution’s main evidence was that which claimed that in the presence of one of her victims, to which she had been taken after being seized, the body bled fresh blood after she had touched it; an absurd piece of evidence, but one that ultimately led to her death.

At Lancaster another seemingly incredible development was the testimony of a nine year old girl. The child was the daughter of Elizabeth Device, and her witness damned all but one of the accused. Evidence given included the suspicion by the youth that her mother had been a witch for many years, and that she owned a familiar, a dog named Ball, who had aided her mother in several murders. Murder was the theme of many of the trials, but some of the accused had simply been in the wrong place at the wrong time. A meeting had been held at Malkin Tower where the Demdikes resided. The reason for the meeting is unclear but the date was the 6th of April 1612. Notably it was Good Friday, and all of those discovered to be at the meeting were on trial at the Assizes.

Of all of the eleven accused at the trial only one was found not guilty. The others were hanged, and from then their infamy became cemented in history. Today the area is famous for the witches and the trials. The names are well known, the locations are still fresh in the minds of the locals, and tourism has kept the legacy alive. For those wishing to learn more about the Pendle Witches there are many books and documentaries which are certainly worth exploring. The story is fascinating in its entirety. The events of 1612 live on; the witches continue to bewitch.