Joanne is self employed and loves to write about a variety of subjects, particularly health, food, pets and travel.
InfoBarrel is a writing platform for non-fiction, reference-based, informative content. Opinions expressed by InfoBarrel writers are their own.
InfoBarrel > Entertainment

The character of Peter Gunn made his tv debut in 1958.  This series was about a suave and sophisticated private investigator, and was one of the first to feature a PI as the lead character. Other programs were modeled after it, and it helped set the standard for future dramas.

Craig Stevens played Peter Gunn to perfection.  He reminds me a lot of Cary Grant, with his perfect hair and polished demeanor.

The series is best known for its iconic music, which was written by Henri Mancini.  Almost everyone has heard the classic Peter Gunn theme, even if they had no knowledge of the show itself.  The use of modern jazz music was groundbreaking and innovative at the time.  These jazz themes were used throughout each episode, which enhanced the appeal of the program.   It was a stylish series with a lot of mystery and intrigue.  Most dramas are an hour long, but the episodes in this series are just half and hour.

Who is Peter Gunn?

Peter is a wealthy private investigator who lives in an exotic city.  We don't know exactly where he lives, but it's a waterfront location.   He drives sporty vehicles and even has a car phone, something that was unusual in that day.

Peter is a bachelor with a girlfriend named Edie.  She's a singer at a jazz club where he regularly meets his clients.

He's not a conventional PI with a typical office.  However, he does have a reputation for being a hard working, trustworthy man.  As a result, he has no trouble attracting clients.  Peter charges a fee of $1,000, which doesn't sound like much now, but was a lot of money in the late 50s and early 60s.  On a few occassions he accepts cases out of his area.

He is always impeccably groomed and wears expensive suits and ties.

More About the Peter Gunn Series

The program made its debut in 1958, and ended three years later.  A total of 114 episodes were made.  The tv seasons were a lot longer at that time, with 30 or even more episodes being common.  Today, most series do not film more than twenty five for an entire season, mainly due to much higher production costs.

Although Craig Stevens had been acting for quite a few years, he didn't become well known until he portrayed Pete.  The series also brought fame to Henri Mancini, who won an Emmy and two Grammy awards for his unique style of music.  The Peter Gunn soundtrack was so popular it reached the top spot on the  Billboard chart.

TV series today do not have distinctive theme songs.  I think that is too bad, as many of the old ones become classics.  Mancini's is probably the most iconic, but there are others that have stood out over the years.

The series was created, written and directed by Blake Edwards, who would achieve even greater fame directing such hits as Breakfast at Tiffany's and the Pink Panther movies.  In fact, he would team up again with Mancini again for those films.

Peter's girlfriend Edie was played by Lola Albright.  She was a singer who regularly worked at the nightclub where Pete would often meet his clients.  Edie was so successful that she was able to open her own club.   She would have loved to be married to Peter, but he seemed to be a confirmed bachelor.   They did have great chemistry and seemed well suited to each other.

He knew several people who were regulars at the club, and had proven to be good sources of information.  This often helped him solve some of the toughest cases.  He also worked closely with the local policeman, Lieutenant Jacoby.

A few years after the series ended, Blake Edwards wanted to revive it.  A movie was made and released in 1967 with Stevens once again in the starring role.  However, he had no interest in playing the character again on tv.  A new pilot was filmed with Peter Strauss playing Gunn, although it was not picked up by any network.

This is one classic tv series that hasn't become dated over the years.  Peter Gunn set the standard for future private investigators, and he really make the genre popular.  Future series such as The Rockford Files and Magnum, PI, would become very successful and are classics today.

Peter Gunn is considered by some to be one of the best PI shows of all time.  It has so much going for it, including the tightly woven plots, a great cast and top notch jazz music.  I would definitely rate it as a highly entertaining show.  I discovered it myself not long ago, as it was being played late at night on one of my local tv networks.

The TNT network will be broadcasting a new version of the series, although no air date has been set yet.   It's going to be directed by Steven Spielberg, but there is no word yet on who any of the actors will be.  It will be interesting to see who is cast as Peter Gunn.

Stevens was born in 1918.  He originally was going to become a dentist, but caught the acting bug while taking part in the drama club at university.  He took a chance by giving up his studies, but he wanted to pursue a Hollywood career.

Throughout the 1940s and 50s he had steady work in movies, but the roles he was offered were secondary ones.   Even so, he was able to earn a comfortable living until he made his mark on television.

Once the Peter Gunn series came to an end, Stevens starred in a British drama Man of the World.  This was followed by guest appearances on many tv shows as well as a couple more movies.  Stevens also appeared on Broadway, playing Professor Higgins in My Fair Lady. He retired in the late 1980s.

He lived a quiet and private life, and for the most part stayed away from the Hollywood limelight.  He was married to actress Alexis Smith for nearly half a century.  She died in 1993, and he passed away about seven years later. 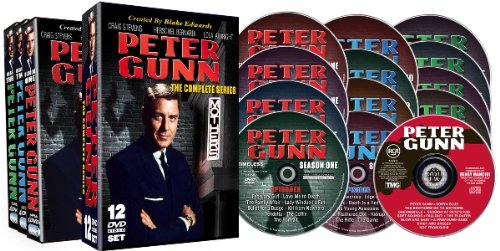