Art of the Pre-Raphaelites [Paperback] Pre-Raphaelite Drawing [Hardcover]
InfoBarrel is a writing platform for non-fiction, reference-based, informative content. Opinions expressed by InfoBarrel writers are their own.
InfoBarrel > History

During theVictorian era, a group of young artists and poets formed a brotherhood which rejected  "the frivolous art of the day" and aspired to "truth to nature". This group initially consisted of Dante Gabriel Rossetti, John Everett Millais and William Holman Hunt, but other members soon joined to form a seven member group.

The art movement was essentially a rebellious one, set in a period of rising social rebellion and the desire for equality and reform. Revolutions were sweeping Europe and a working class movement called Chartism was at its height, which desired universal male suffrage.  The Pre-Raphaelite Brotherhood shunned the established art of the day and the Royal Academy of Art. They instead admired the Medievaland Renaissance art, which they saw as more lofty and spiritual. This harkening back to the ideals of earlier times, was no doubt a reaction to rising industrialisation, social decay and unrest.

Dante Gabriel Rossetti, was a leading member of the group.  He was a poet, artist and translator. As a poet he was inspired by the Romantic poetry of John Keats and in his art by the purity of the Medieval period. His early Pre-Raphaelite art, was religious, spiritual and mystical. Later, he  became enamoured with Arthurian romance and inspired by his 'muse'  Elizabeth Siddal, who he later married.

Sir John Everett Millais, 1st Baronet,  won a place at the Royal Academy schools at the age of eleven, where he was known as "The Child". His art works featured intricate attention to detail, however he was famously criticised by Charles Dickens who said that Millais' painting of  Christ In The House Of His Parents (1850) was "a hideous wry-necked blubbering boy". The painting was however, very controversial in its day as it featured a working class holy family.

Millais was supported by art critic  John Ruskin. Ruskin introduced  his wife Effie to the Millais and she became a model for the artist. Effie, had been married to Ruskin for seven years but was still a virgin. She  was however innocently unaware that anything was missing. Millais and Effie soon fell in love and her marriage to Ruskin was annulled. She married Millais and had eight children in quick succession. Ruskin still supported Millais however.

William Holman Hunt, was another founding member of the group, who idealised the art of Medieval Europe before Raphael. Hunt's father was a warehouse manager in Cheapside, yet the young Hunt eventually managed to gain entry to the Royal Academy art school. He became disillusioned with the British art of the time however and helped form the Pre-Raphaelite Brotherhood, in rebellion. Hunt's art was often spiritual, with metaphorical content. He also later developed his own religious symbolic style, which he called"symbolic realism." Hunt never experienced great success during his life and was considered a fairly unlikable character.

So while today, we think of Pre-Raphaelite art as beautifulyet idealised, it was inspired by a rebellious 'brotherhood', who were dissatisfied with the contemporary art of the times. The Pre-Raphaelite brotherhood, were attempting to turn away from the post industrial world, which was  in a state of conflict and social turbulence. And such is the beauty and charm of this art movement, I for one, am very glad they did. 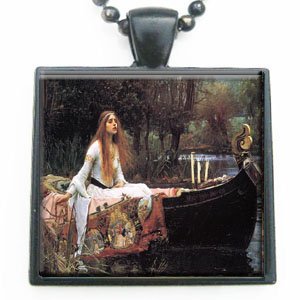