JPLarson We abuse land because we regard it as a commodity belonging to us. When we see land as a community to which we belong, we may begin to use it with love and respect.â€ Â Aldo Leopold Â A Sand County Almanac (1949),
InfoBarrel is a writing platform for non-fiction, reference-based, informative content. Opinions expressed by InfoBarrel writers are their own.
InfoBarrel > Entertainment > Books & Comics

The Remaining By DJ Molles-A Review

Not just another take on the zombie apocalypse, The Remaining takes stark look at a world gone mad from a terrible disease that destroys the human brain and takes all semblance of the modern human with it.  What the disease leaves behind is a creature maddened by hunger and unafraid of death.  They will do whatever it takes to hunt their prey down and consume it.  Into this world enters our hero of the story, a Captain of the US Army tasked with trying to bring sanity back to a world gone mad.

The book brings you into the world of US Army Captain Lee Harden, who after spending a month alone and isolated in his bunker steps out into a vastly changed world.  Our captain is part of a group of elite soldiers called Coordinators.  There is a Coordinator placed in every state in the lower 48 and each of them is tasked with a mission in case of societal collapse,

To make this possible they are given access to well stocked bunkers placed around their state, bursting with food, medicine and perhaps most important item in this new world... weapons.

So with a rifle in hand and no real idea of what is going on in the world Captain Harden takes his first steps into a very dangerous world.  I don't want to give anything away so you can enjoy the book like I did but let's just say he runs into trouble right away with the survive part of his mission.

Not only is he trying to keep himself alive but he quickly finds himself saddled with other survivors that depend on him to keep them alive in the days ahead.  As with any good story the plans of the hero quickly go wrong and he has to improvise and make the best of the bad situation he is in.

The Remaining is full of well rounded characters, sudden plot twists and the hold your breath moments that make it impossible to put the book down.  The first novel of the series is a great introduction to a new apocalyptic world.  For anyone that is a fan of sci-fi or horror novels this is a great book for you.  I do have to give credit to the later books in the series for expanding the world the story takes place in and by introducing new characters that really change the direction of the series.  While the first novel is not my favorite of the series so far it is definitely is a strong debut for a first time novelist.

I hope you enjoy The Remaining by DJ Molles as much as I did. 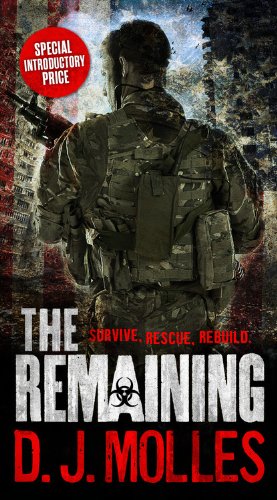 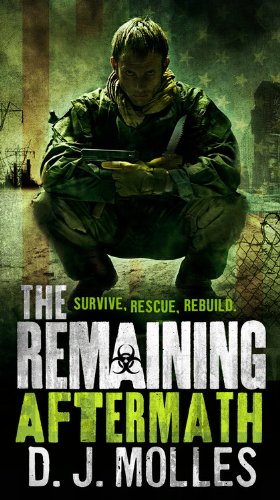