The Road: An Introduction To Filipino Horror 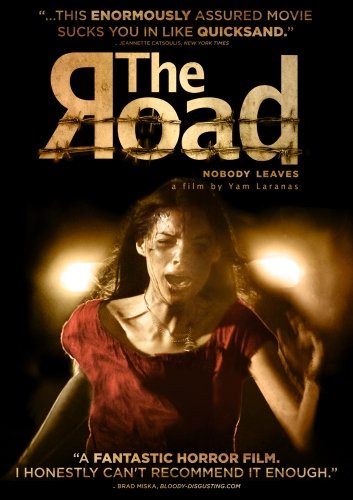 The Road Amazon Price: $14.99 $3.36 Buy Now(price as of May 26, 2015)
A spooky and emotionally gripping horror tale delving deeply into insanity and torment, this title offers a lot of the gore that Asian horror is known for. Yet it also offers an unusual spiritual angle without taking away from its thrills and chills.

After seeing ultraviolent, ultra-vile films like "H" and "Audition", I always wonder if I want to make it through a similar film.  Today, I decide to read "The Road"'s description online and, intrigued, I rent it.

On seeing the opening credits, I realize I'm not just watching another B movie.  "The Road" launches into a lush soundscape and desolate roadside night scene.  I like it; right away, it signals that the movie won't be a heavy-handed gorefest.

The scene changes to a police award ceremony held at noon in 2010.  At its close, a distraught mother begs officer Luis, recipient of the award, to reinvestigate the disappearance of her daughters, Lara and Joy, who vanished 12 years ago in 1998.

At first the movie jumps back only two years instead of twelve, to 2008.  It details an attempted night on the town with a boy named Brian, his girlfriend Janine, and her tween cousin Ella.  In a foreshadowing of a greater divide between the genders, Ella and Janine roll the car out of the driveway, silently grousing, while Brian steers.  The cousins climb in, Brian starts the car, and they begin a furtive trip into town.  Brian spooks when a patrol car nears, and when a U-turn brings him off the main road, he crashes a fence and lands on The Road.

Time on The Road is filmed very well.  It's a desolate dirt road with tropical forest on either side, and as the car continues in, the headlights are swallowed in darkness.

The sense of isolation becomes increasingly overwhelming until a single red car appears.  At first it simply passes the teens by, but as they go deeper along the muddy forest road, encounters become more and more menacing.  In time the teens are stranded, and what was a joyride devolves into a hell no mortal can escape.  At this point, the story ties into the disappearance of Lara and Joy, and flashes back another ten years.

The 2008 retelling is a typical rollicking B-movie scare, but it's in 1998 that the pace slows greatly and everything's the blackest.  The movie's villain makes his first true appearance.  The girls are apprehensive but beautiful when they meet him, but in a slow-burning rage he demolishes them through a series of unspeakable acts, reveling in their fear, pain and suffering.

Another brief flashback to the house at the present as the police search it, and then the movie slides its deepest, 22 years back into 1988.   It's here that the film is at its most sentimental and tenderest, yet it's still riddled with violence and depravity.  Filipino culture, especially its reverence for marriage, has a strong bearing on this panel of the movie's triptych.  Oddly, it's when the movie flashes back to the present one last time that the transition is the smoothest, just in time for a logical, lavishly presented ending.

On reaching this movie's end, I don't feel the pure revulsion that I did after watching "Audition" or the corny disgust of "H".  The ending, while sad, brings closure in a way much more merciful than J-horror usually does, without being incongruously upbeat.

I enjoyed the detail and effort put into this release, and plan on watching it again for all the little details that didn't register until the end.  "The Road" is a heavy movie without being overwhelming, one that makes me ponder human nature and how people reject the innate love that arises, unafraid, in the face of evil.  If you like a movie with so many twists and turns you lose sight of the original path (or keep seeing the same tree again), I strongly recommend "The Road".  I give it 4.5 stars, with just half a star off for cookie-cutter teen roles, confusing victim makeup, and some obviously fake (but tiny) rendered butterflies.

An optional spoiler summary begins ten lines down for readers who would like to know more about the plot.

After a police award ceremony, Officer Luis receives a distraught request from a bereaved mother to find what happened to her two daughters twelve years ago.  The movie flashes back two years to 2008, when three teens take a wrong turn onto an isolated road at night and are haunted by ghosts of previous victims.  The fearsome attacks kill all three teens, and when the town police recover their bodies, a locket belonging to one of the two daughters is found.  The movie flashes back to 1998, when the two girls, stranded on The Road, meet a quiet, angry boy who takes them captive, torments and brutally kills them.  After a small bit of exposition in the present, the story returns to an even deeper past in 1988, when the younger boy, traumatized by his mother and the death of a girl who cares for him, undergoes a terrifying change.  Lastly, the movie returns to the present, where the identity of the killer, now a grown man, is revealed.

A Critic's View: What I Liked And Didn't