The Role Of Ocean Circulation In Global Climate Change

The oceans cover around 70% of the Earth’s surface area; therefore it is inevitable that they have a large effect on the global climate, and the contribution of ocean circulation systems in past and present global climate changes is huge. A major contributor of the ocean in terms of driving global climate change is the thermohaline circulation, which involves water being circulated due to density contrasts in the water bodies (Bigg, 2003). A simplified structure of the thermohaline circulation shows deep water being carried towards the Pacific Ocean; this water upwells en-route and is transported back in near-surface currents to the North Atlantic downwelling regions, such as the Labrador Sea, and the Weddell Sea (Bigg, 2003).

During the reconstruction of past thermohaline circulation three distinct circulation modes have prevailed at different times in the Atlantic Ocean (Sarnthein et. al., 1999; Alley and Clark, 1999). The Stadial Mode involved the formation of North Atlantic Deep Water (NADW) in the subpolar North Atlantic; the Interstadial Mode involved the formation of the NADW in the Nordic Seas; and the Heinrich Mode occurs when NADW formation ceased and waters from Antarctica filled the deep Atlantic basin (Rahmstorf, 2002). The image below shows the structure of the three distinct modes of circulation.

The effects the thermohaline circulation can have on global climate systems are evident when reconstructions of high amplitude climatic events are taken into account. A key series of high amplitude climatic events that have been reconstructed and studied are the Dansgaard-Oeschger (D/O) events (See Fig. 3 – Top). The majority of the reconstructions of these events involve adjustments in the thermohaline circulation (Rahmstorf, 2002). D/O events are abrupt global climate changes (Rahmstorf, 2001), with the amplitudes of climatic change being largest in the North Atlantic, whilst the southern hemisphere experiences a hemispheric ‘see-saw’ effect (Rahmstorf, 2002) (an example of the ‘see-saw’ effect is shown in the above image, where the southern hemisphere is waming as the northern hemisphere is cooling) due to the reduction in the heat transported north from the southern hemisphere. In data collected from GISP2 (Fig.3), D/O events begin with a rapid warming of 5-10°C within a few decades, followed by a slower cooling stage that lasts for several centuries, before a rapid cooling back to cold-stadial conditions (Rahmstorf, 2002). There is also an observed periodicity of around 1,500 years for D/O events (Alley et. al., 1998). The most convincing theory in explaining D/O events, a theory that is strongly supported by model simulations, is that of latitude convection shifts between the Nordic Sea and the mid-latitude open Atlantic Ocean (Rahmstorf, 1994). In this theory, the warming phase is explained by a northward intrusion of warm Atlantic waters into the Nordic Sea, whilst the prolonged cooling phase is seen as the interstadial mode of ocean circulation (See Fig. 2) gradually weakening over several centuries and then the drastic cooling marks the time when deep water ceases to form in the Nordic Sea (Rahmstorf, 2002). It is known that these events are triggered by an external force, but it is unknown what the exact nature of the trigger is (Rahmstorf, 2002).

Another series of climatic events related to thermohaline circulation are Heinrich events. These are characterised by sediment layers (Heinrich, 1988; Hemming et. al., 2000) located in the North Atlantic at intervals of roughly 10,000 years (Rahmstorf, 2002)(See Fig. 3 – Bottom). The sediment in the Heinrich layers is so coarse that the only possibility it that it is ice rafted debris. The variation in the thickness of Heinrich layers ranges from several metres in the Labrador Sea to just a few centimetres in the East Atlantic (Rahmstorf, 2002). The way in which these layers are deposited and the reduction in layer thickness suggests large, episodic iceberg discharges (Rahmstorf, 2002), with possibly up to 10% of the Laurentide ice sheet being discharged in one event (Bond et. al., 1992; Andrews, 1998). Sediment data shows that during Heinrich events NADW formation could be stopped entirely (Walker et. al., 2002; Sarnthein et. al., 1999; Keigwin et. al., 1994), this is shown in the image above (The “Heinrich mode”). This thermohaline circulation collapse is expected (Rahmstorf, 1995; Ganopolski and Rahmstorf, 2001) due to the sea-surface density being greatly reduced with the large influx of fresh water from the iceberg discharge (Rahmstorf, 2002). The initial triggering mechanisms that caused the Laurentide ice sheet to discharge such a large volume of ice are unclear, with one hypothesis of a major discharge beginning spontaneously after the ice sheet reached a critical height (MacAyeal, 1993; Clark et. al., 1999). The climatic effects of this consist of the direct result of raising the sea level and lowering the ice-sheet surface, with a consequence of this release of fresh water into the Atlantic Ocean being a collapse of the thermohaline circulation (Rahmstorf, 2002). This collapse brings about clear cold phases in the South Atlantic, with them showing larger amplitude than the D/O warming events (Paillard and Cortijo, 1999; Cacho et. al., 1999; Bard et. al., 2000). However stadials in Greenland are equally cold whether a Heinrich event occurs or not (Rahmstorf, 2002), this is due to the thermohaline circulation being in “Stadial mode” during Heinrich events, meaning the ocean currents would not warm as far north as Greenland before the collapse, so the collapse has no effect (Ganopolski and Rahmstorf,  2001).

Fig. 3 - The Difference Between Heinrich Events and Dansgaard/Oescher Events

How Accurate Are These Ocean Circulation Models?

Coupled climate models are a major part of reconstructing past climatic changes in relation to ocean circulation and applying any trends that are recognised to predicting future changes. These models have now reached a level where realistic simulations of many aspects of palaeoclimate are possible (Rahmstorf, 2002). This means a quantitative, rather than qualitative, understanding of the key mechanisms operating within these systems is now possible (Rahmstorf, 2002). These coupled climate models are essential in the reconstruction of past ocean-atmosphere exchanges; and therefore they are essential in our understanding of the link between ocean circulation and global climate and, in turn, our predictions of future changes in these systems. These models have helped identify atmospheric greenhouse gas forcing and freshwater flux in the Atlantic as major contributors towards altering thermohaline circulation.

Variations in freshwater flux into the Atlantic Ocean is a major component that governs the strength of the thermohaline circulation (Clark et. al., 2002) and can result in drastic change to regional and global climate (Bigg, 2003). The importance of freshwater budget makes identifying the key mechanisms operating in past freshwater budget changes (E.g. those stated during the discussion of the Heinrich events) key to understanding the past changes in thermohaline circulation, and therefore related past global climate changes (Bond et. al., 1999; Clark et. al., 2001).

However, whilst past climates have been affected heavily by the thermohaline circulation, in current times the dominant mode of modern climate variability is the Tropical Pacific variability (Clark et. al., 2002). This refers to the ENSO system mentioned above, which has a large regional and global effect on climate. When the Tropical Pacific is in a normal state, northeast trade winds drive waters towards the equator, this induces an upwelling of cold waters in the East Pacific (East Pacific Cold Tongue), whilst in the West Pacific there is an area of warm water (West Pacific Warm Pool). The pressure difference between the two causes strong winds travelling from East to West (As shown in the below image 'normal' section). When the trade winds are especially strong a La Nina event occurs, where the West Pacific Warm Pool is confined even more by the large pressure difference. However, during an El Nino event trade winds are a lot weaker, therefore eliminating the upwelling and stopping the East Pacific Cold Tongue emerging (As shown in the below image 'El Nino' section). As no pressure difference emerges the West Pacific Warm Pool is allowed to spread out into the surrounding ocean, causing sea-surface temperatures to increase, these El Nino or La Nina events occur interannually. The climatic effects of this dispersion of warm sea-surface waters include an increased amount of precipitation due to the warmer air temperatures increasing evaporation. Currently, it is not clear how ENSO responds in colder or warmer climate. Some models predict that ENSO activity will remain similar to the present day in a warmer climate, whilst others suggest there will be stronger and more frequent events (Clark et. al., 2002). It is also not entirely clear whether ENSO events actually help to drive global climate change or whether they are simply a response to climate change, however if they do not  drive global climate change there is still a strong case for it being a powerful positive-feedback mechanism with the global climate. It is also apparent that Atlantic-to-Pacific moisture transport is sensitive to the phase of ENSO (Schmittner et. al., 2000), meaning that a trend towards the enhanced frequency of El Nino events could lead to an increase in the exportation of moisture from the Atlantic Ocean, therefore introducing the possibility of ENSO events affecting the thermohaline circulation. 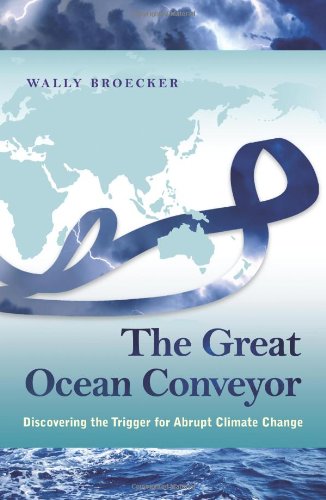 The Great Ocean Conveyor: Discovering the Trigger for Abrupt Climate Change Amazon Price: $32.95 $22.95 Buy Now(price as of Aug 8, 2016)
A fantastic book that details some of what this article delved in to.
Next >> What Happened to the Aral Sea?