The System of Racism and White Supremacy, Part 1

The following is a compilation of the author’s personal insights and perspectives on the subject. It is not intended to engender emotional responses or arguments about this issue. It’s up to you to decide whether or not you agree with the information presented and then, if applicable, take responsibility for your part in it. Perhaps together we can eradicate this blight, once and for all, from our collective psyche.

The system of racism and white supremacy seems to be something many people in our post-Obama world can’t help but deny. They wonder, “How can there be racism when we have the first Black man as President of the United States?” The question appears sound on the surface. It's posed by white people who refuse to reconcile the fact that racism exists and that they are the beneficiaries of white supremacy.  However, it’s a notion that’s used to validate the idea that power and privilege of the so-called majority population in the U.S. was officially tossed aside as soon as President Obama was sworn into office.

As a person who has an immense stake in this topic, I badly wanted this to be the case. Nothing would have made me happier and my life more sweet than for this cancer to be eliminated from the world forever. Just like that. With the blink of an eye. Unfortunately that hasn't happened, as you can see from the unflattering depiction of our President above. The fact that this scourge still haunts us is not because of the current administration or any individuals working in it, the problem is much deeper and much wider in scope than one person, one group, or one nation.

You see, both words in the phrase of this article topic are synonymous and  ingrained throughout the world in the minds of those who benefit from it. The focus of this terminology is important because words are important as they are the cement, other than violence, that holds that entire diseased system together. The phrase is used to deceive the victims who experience the repercussions of it. Whoever created them had to think in terms of, “In order to make this system work, our goal is to use deceptive speech and word tricks. If or when those methods don't work, we’ll back it up with direct violence.” Deception which is used against people to their detriment is a form of indirect violence. 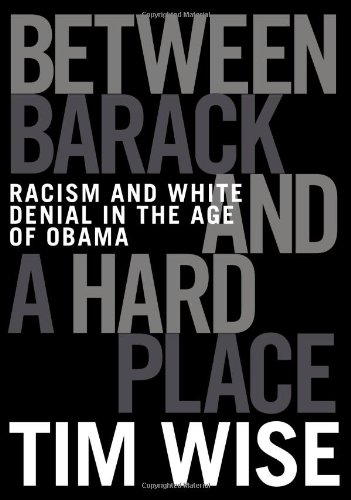 Between Barack and a Hard Place: Racism and White Denial in the Age of Obama Amazon Price: $14.95 $7.37 Buy Now(price as of Apr 20, 2016)
This excellently titled book explores the issue of race in America upon the election of it's first Black President. It's an absorbing, intellectually stimulating, and provocative read that will definitely push some buttons and step on some toes.

How Racism Was Implemented

When white people in control of this system got together the key thing they did in dealing with the non-white people of the world is they thought up the idea of racism, and apparently decided this would be the best and most efficient manner in which to implement their ideas. It turned out to be the most powerful idea for motivating people and getting them to do things at your bidding than any other idea conceived in the minds of people. It became the most powerful religion on earth, that is, the ideology of racism and/or white supremacy. Which, here again, they’re both the same thing: Racism is white supremacy and white supremacy is racism. There’s no other form of racism on the planet.

I was under the misguided impression at one point in my life that racists are the smartest people on the planet, negating myself and every other non white individual from the equation. I also believed white people, whomever they happen to be or wherever they happen to be are the smartest and most powerful people on the planet, also negating myself and every other non-white individual from the equation. I came to this conclusion by what I termed as following the logic, a much better tactic than following what any particular person says about the subject. I still adhere to following the logic but I have also elevated my thoughts concerning these beliefs about racists and white people in general and no longer consider them valid.

People who think they're superior to others based on internal or external values are simply confused, desperate, pathetic, and hurting souls. Instead of reviling them with hatred, I pity them now. This turnaround doesn't deny the fact that white supremacists are the people who created this false dichotomy and used a logical process for doing so, which is why it has lasted for so long. It’s become the monumental world problem that most people, including all of the scholars and all of the people in academia, say they don’t have the solution. Almost everyone confirms they can talk about it but haven’t figured out exactly what to do about it. So, it’s a well-packaged, simplistic and basic formula.

Someone had to make the profound observation of the people on the planet and conclude that some of the people are dark-skinned and some of the people are light-skinned (I'm being facetious here by using the word profound because it's not difficult to make that type of observation). The people who appear to be the lightest in skin color will be called white people and the dark people will be called non-white. It became a caste system based on the royalist platform, which means holier-than-thou, and the power brokers in place at the time decided to carry that forth.

The royalist format is based on having a category of people who, because of their whiteness,  would lord it over all of the people they classify as non-white. The first thing to understand is they do the classifying. The people who are subordinate don’t do the classifying. Even though in this era, under the refinement of racism, people classified as subordinate are allowed to say what they are in terms of their culture. But the bottom line is the supreme judges will be the people who believe in white supremacy. That’s a political idea and, if you’re white, you belong to the club. You might be in a particular pecking order in the club but you are in the club.

For example, I have discussed this scenario with white people who often become defensive that they're in some type of exclusive club by stating the struggles their family had because of lack of money or resources. I then point out to them that they may have been on the lower end of the hierarchy of this system or club but they still maintained the rights of a club member in good standing because they obtained more rights, privileges, benefits, and opportunities than a non-white family in the exact same circumstance.

It stands to reason, a white person can reject their membership at any time but they do so at great risk to all of their comforts. So, that’s a pretty good incentive for the average white person to not opt out of the white club or what you might call the white race or the white nation. The people who choose to remain members of this club are the people who run the planet. Those who have chosen not to be in the club, aren’t powerful and immediately lose their power. Racism is a global system and the white nation, meaning the collective white supremacists, are the only real nation on the planet. Countering racist dogma calls for an entirely different perspective on how the world is run. This is based on evidence, not theory, which is why it has to follow logic in order to have substance.

Continue to part 2 of The System of Racism and White Supremacy.