If you love to write and would like to make some money doing so, sign up to infobarrel today, so you can start earning cash for doing what you love. Rock on! Sign up now at the link below:  http://www.infobarrel.com/signup.php?ref_id=2544112
InfoBarrel is a writing platform for non-fiction, reference-based, informative content. Opinions expressed by InfoBarrel writers are their own.
InfoBarrel > Travel & Places > Places > United States

The Overseas Highway is the 128 mile stretch of U.S. Highway One that connects mainland Florida to Key West. The roadway was initially built as a railway for Henry Flagler's ambitious Overseas Railroad. The railroad served to connect the keys to the mainland for twenty-three years from 1912 until 1935 when it was destroyed by a hurricane.

Sections of the old railroad were used to build the highway in stages, and since the 1950s the Overseas Highway has replaced the railroad as the only connected land transport thoroughfare from the mainland to Key West.

The Seven Mile Bridge crosses Moser Channel and connects Knight's Key (a part of Marathon) in the north to Little Duck Key in the south. Marathon is considered the south end of the middle keys. Therefore, once you make landfall on the south side of this jarringly long bridge, you are officially in the lower keys.

The driving surface of the 7 Mile Bridge is relatively flat for the most part, with a high-rise section at the midway point that crosses the navigable cut of Moser Channel. Large vessels traverse under the bridge's high span. The Atlantic Ocean extends from the south side of the bridge, while the Gulf Of Mexico and Florida Bay extend from the north side, with the line of the bridge dividing the two.

One-third of the way across the bridge when heading south you will find Pigeon Key to be visible on the Gulf side. Pigeon Key is an old pioneering settlement that is now used by the University Of Miami for marine biology studies. Pigeon Key is also open to the public through guided yours of the island.

Just south of Pigeon Key and out in the Atlantic waters is Molasses Key. The view of Molasses Key from the 7 Mile Bridge, with its coconut palms, white sand beaches, and turquoise surrounding waters is one of the most thrilling sights for anyone driving to the lower keys. To me, when I see that tropical island, I always feel like I am finally on island time. 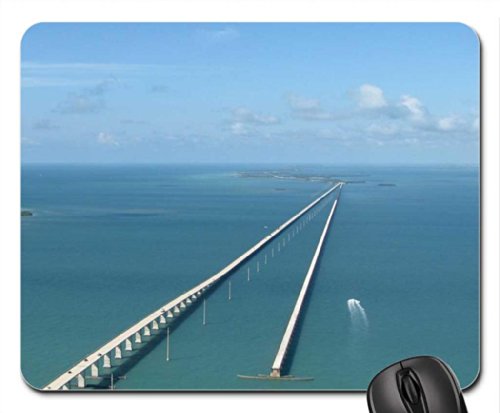 Seven Mile Bridge, Florida Keys Mouse Pad, Mousepad (Bridges Mouse Pad) Amazon Price: $4.49 Buy Now(price as of Jan 17, 2016)
Many of us drive our computer mouse at least 7 miles per day! Why not enjoy the view with this 7 Mile Bridge Mouse Pad!

The bridge as it stands today was opened in 1982. It is actually 6.79 miles in length. It has a clearance of sixty-five feet under its highest span (at high tide that is). The structure's construction is that of a precast segmented box girder system. A box girder bridge is one that has main beams composed of hollow box runners of, usually, some form of reinforced concrete. It is the same system often used to construct highway overpasses.

Construction cost was $45 million, and it was completed six months ahead of schedule. It was engineered by Figg & Muller Engineers, and has earned several engineering and construction awards. Among the accolades bestowed upon the bridge is the Federal Highway Administration's prestigious Exceptional Award for Cost Savings Innovation. 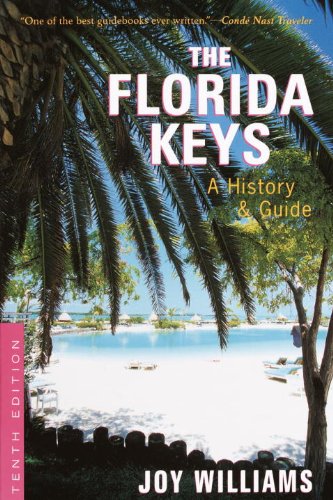 The Florida Keys: A History & Guide Tenth Edition Amazon Price: Buy Now(price as of Jan 17, 2016)
This is the 10th edition of this highly-rated guide to the Florida Keys.

Things To Do In The Area

There is no shortage of activities in the vicinity of the longest Overseas Highway bridge. One of the most famous is the 7 Mile Grille, located at the base of the northern end of the bridge's landing at 1240 Overseas Highway, Mile Marker 47.5 in Marathon, Florida 33050. The 7 Mile Grille has been a keys landmark since 1954. The 7 Mile Grille features "Catch And Cook" service, which allows visiting anglers to bring in their catch and the restaurant will cook it for you! The location advertises free wi-fi, and they are also said to have the best Key Lime Pie in the keys (although that designation has been given to far too many establishments to count at this point).

Marathon Key to the north and Little Duck Key to the south are both renowned fishing and diving locations, The surrounding waters hide coral reefs, lobster, snapper, grouper, and many more sport fish. On Marathon you can rent Jetskis, and charter fishing and snorkeling trips. Both Marathon and Little Duck Key are also both outstanding places for a kayak paddling adventure.

On The Bridge Southbound

Beautifil clouds sail over the Atlantic Ocean on the 7 mile bridge heading south.

The Seven Mile Bridge is one of the longest bridges in the Americas. It stretches across gleaming waters and divides the Atlantic Ocean from the Gulf Of Mexico. It is also the gateway the the lower keys in the chain of islands known as the Florida Keys.

From its 6.79 mile expanse drivers and passengers are likely to see azure waters, sea turtles, dolphins, sailing ships, tropical islands, lobster boats, sweeping oceanic thunderstorms, and spectacular vistas of cloudless sky. Traveling over the Seven Mile Bridge is as close to going to sea as you can get in a car.

It is a special landmark that makes an already amazing drive even more impressive. The bridge was completed ahead of schedule in 1982 and has won many engineering and highway construction awards.

It spans Moser Channel and connects the middle keys to the lower keys, and is therefore, truly considered a bridge to paradise.

The trip across the 7 Mile Bridge set to jazzy music.

A view from the bridge.

Palms stand guard on Pigeon Key as seen from the bridge.