Ancient Egypt was home to one of the world's first great civilizations. Supported by the fertile soil of the Nile valley, this advanced agricultural society developed a fascinating and complex culture and ruled over an ancient empire1 extending from the shores of the Mediterranean into the heart of Africa. The Egyptians developed one of the world's first writing system, the beautiful and fascinating pictorial writing known as hieroglyphs or sacred writing, along with the advanced technology and immense wealth necessary to build the great pyramids.

Mysteries of an Ancient Civilization

The civilization of Ancient Egypt was shrouded in mystery for most of the modern era. Egypt became part of the Roman empire in 30 BC, and the Christian emperor Theodosius subsequently destroyed the ancient pagan religion that had held sway for over 5,000 years. The priests who knew how to read the mysterious sacred writing were no more, and the modern world only began to learn about the wonders and mysteries of Ancient Egypt when scholars began to decode hieroglyphics in the nineteenth century.

Other keys to unlocking the secrets of Ancient Egypt were archaeological discoveries unearthed from the tombs of the Pharoahs. One of the best known of such discoveries is the tomb of the 19 year-old "boy Pharaoh" Tutanhamun, popularly known as King Tut, which was discovered in the 1920s by archaeologist Howard Carter2.

Credit: By Exclusive to The Times - The New York Times photo archive, via their online store, here, Public Domain, https://commons.wikimedia.org/w/index.php?curid=2948071

Miraculously, the tomb had remained hidden from grave robbers for over 3,000 years, and was still filled with the priceless treasures which had been buried with the Pharaoh. These included jewel-encrusted gold jewellery, richly decorated furniture, two thrones and six chariots, along with games, clothing, musical instruments, weapons, food and wine, everything, in fact, that a great ruler needed to accompany him into the afterlife3.

Also found in Tut's tomb were 139 walking sticks3 and two mummified female fetuses2, items which give silent and tragic testimony to his genetic heritage.

A Legacy of Royal Incest

Tutankhamun was a child of incest, a common practice among ancient Egyptian royalty. Brother-sister marriage within the royal family served to keep power within the family and maintain the purity of the royal bloodline, but also increased the risk of genetic disease. DNA analysis on the mummies of Tutankhamun and other members of his family in 2010 revealed that his father was the pharoah, Akhenaten, and his mother was one of Akhenaten's sisters. King Tut's wife, Ankhesenpaaten, was also his half-sister.4

Credit: By AnnekeBart (Own work) [CC BY-SA 4.0 (https://creativecommons.org/licenses/by-sa/4.0)], via Wikimedia CommonsGenetic research indicates that the mummified fetuses in Tutankhamun’s tomb were likely his daughters, one delivered prematurely and one delivered after a full-term pregnancy. Although no evidence has been found of any congenital issues2, it is possible that both daughters were stillborn as a result of genetic defects.

Given his genetic history, it is not surprising that the young Pharoah's mummified remains show several congenital defects. His palate was slightly cleft, his spine was twisted sideways with scoliosis, and the vertebrae of his neck were fused together, a congenital condition known as Klippel-Feil syndrome. In addition, his left foot was deformed2 perhaps as a consequence of the highly painful genetic bone disorder Kohler disease which was revealed as part of the DNA studies. This explains why there were so many walking sticks buried in the tomb: because his foot was painfully deformed, the young Pharaoh would have had great difficulty walking unaided.

Tutankhamun was tall and slim (approximately 180 cm in height) and had inherited his family's typical prominent front teeth. In addition he had a strangely-shaped high, narrow skull. This may have been deliberately created in order to make the pharoah look different to common people. This possibility is persuasively argued by anthropologist Dr. Robert Martin in this video:

Tutankhamun ascended to the throne of Egypt in 1333 BC when he was 9 years old, and married his half-sister, Ankhesenepatan2.

During his reign, Tutankhamun was worshipped as a god. Tragically, his life was cut short after only 9 years on the throne, when he was 18 or 19 years old.  There has been much conjecture about the cause of his death, and it was long believed, based on damage found to his skull, that he was murdered.  However, it is now believed that the damage to Tut's skull occurred after his death.

But other damage was also found. The young pharoah had a broken left leg from a mishap which appears to have occurred shortly before his death5. In addition, the DNA research team discovered that he had been infected several times with different strains of malaria2, leading to speculation that, congenitally frail as he was and with his immune system compromised by malarial infection, he may have succumbed to a fatal infection following his leg fracture5.

In all events, Tutankhamun must have died suddenly, because his funeral seems to have been arranged  hurriedly2.

The bodies of dead pharoahs were preserved for the afterlife by means of a lengthy and complex mummification process. Priests removed and preserved the brain and internal organs, and stored them in jars or boxes to be placed in the tomb with the mummy. The body was then salted with natron to dehydrate and preserve it. Once it was sufficiently dessicated, the body was carefully wrapped with linen strips, coated with resin and wrapped again, a process that might be repeated several times7.

After mummication, Tut's face was covered with a golden death mask which shows him wearing a striped headdress and false beard, and holding the crook and flail which were the symbols of his status as divine Pharaoh.  The mask, which is the iconographic and universally recognized image of King Tut, weighs ten kilos (24 pounds) and is decorated with semi-precious stones, colored glass paste, obsidian, feldspar and quartz.6

Credit: By en:User:MykReeve - Uploaded to en.wikipedia as Image:Tutankhamun-mask.jpg on 28 May 2004 by en:User:MykReeve (see talk page for details)., CC BY-SA 3.0, https://commons.wikimedia.org/w/index.php?curid=34321

Tutankhamun’s body was carried across the Nile in a golden coffin to the Valley of the Kings, where it was sealed in a tomb filled with provisions for the afterlife, and he lay forgotten until his tomb was discovered by Howard Carter, virtually intact, in 19222. 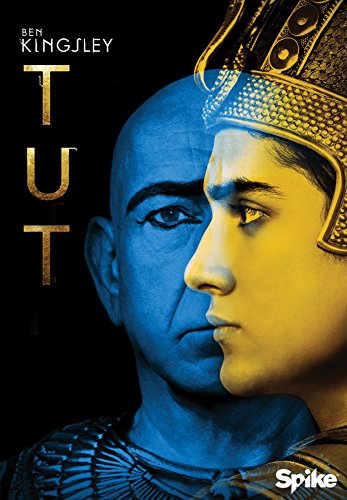 Howard Carter's discovery of the tomb and its priceless created a popular fascination with ancient Egypt that continues to this day.

According to Wikipedia, “Tutankhamun is the world's best known pharaoh partly because his tomb is among the best preserved, and his image and associated artifacts the most-exhibited.”  The treasures from Tutankhamun's tomb have been featured in popular exhibitions around the world.  The Treasures of Tutankhamun world tour, for example, attracted over 1.6 million visitors when it opened at the British Museum in 1972, and over eight million people attended its closing exhibition which ran from 1976 to 1979 at the New York Museum of Modern Art.2

To celebrate the 100th anniversary of  the discovery of Tut's tomb, a "once in a lifetime" world tour of  artifacts from the tomb, King Tut: Treasures of the Golden Pharoah, begins in Los Angeles in March of 20188.  This fabulous exhibition will undoubtedly increase public fascination with the short, tragic life of this young pharoah and the rich and fascinating ancient civilization of which he was a part.