The System of Racism and White Supremacy, Part 5

This is part 5 of The System of Racism and White Supremacy. Parts 1-4 are available if you missed them.

What are white supremacists doing now, according to the white code? They’re doing four basic things which are designed to provide maximum confusion among the victims, which has been successful, so far a we know, worldwide:

1. Racial showcasing - Taking huge numbers of Blacks and placing them as front men and women on a global scale. I don’t want to name names because it’s personally unethical and causes conflict among Black people. Let’s just say, they’ll be the ones rolling in money. The racists showcase their elaborate homes and cars, their knowledge and expertise, etc., via extensive media coverage. What’s the purpose of this showcasing? Any Black person complaining about racism will become a laughingstock because so many Blacks will be showcased who are “successful”, it will seem racism is extinct.

White supremacy is a worldwide business and, like any other business, it works on profits and losses. White supremacists know the cost of doing white supremacy has gone up. They can no longer get away with showcasing Joe Louis and Lena Horne like they did years ago. They have to have millions of African people to showcase. This is one of the first elements used to cause maximum confusion of it’s victims. It’s purpose is to prevent Blacks from exposing the racism they see and experience. They’ll think something is wrong with them because they haven’t reached the level of “success” that these other showcased Blacks on display have reached. So they come to the conclusion that it must not be based on race. But for the 4-5 million African people who are showcased, there are hundreds of millions worldwide, who are impoverished. That’s the way the business operates and will continue to do so in the future.

2. Racial population engineering - This is done to large amounts of non-white people, directly or indirectly, on an ongoing basis. They’re goal is not to wipe out the entire population of non-whites because when you’re in the business of racism, you don’t kill off the commodity that will allow racism and their barbaric ego trip to continue. Instead, the non-white population is tailored in this way to keep thems controlled. So, several million people are eliminated in the Congo, then a few years later millions are killed off in Nigeria, several million are murdered in Mexico, and so on. The places chosen to carry out this mass genocide are highly selected and computerized.

They are places where huge numbers of non-whites are killed or, better yet, it’s orchestrated where the non-white population kill off each other. Similar to what’s occurring in most of the northern cities in the U.S. where non-white gangs are gunning each other down in the streets. Or in the Congo where roving, heavily armed bandits are severely maiming, brutalizing, and killing entire villages. This type of behavior is instigated and incited by racist white supremacists who capitalize on the mentality of the people and who see to it that it continues and never stops. It’s racial population engineering in all its ugliness. In other regions where the population of people are reasonably sane and don’t have a tendency to kill off each other, racial population engineering is implemented in other ways. Drying up the water, poisoning rivers, dumping toxic waste, and various other methods are used to depopulate non-white people.

3. Racial dislocation - This is a strategy that keeps non-white people on the move. People who are constantly moving through eminent domain, urbanization, urban renewal, gentrification, or by drying up the water sources, especially in locations where the people depend on fishing for their livelihood. If a dam is built several hundred miles away and the water is sealed off from flowing where the people reside, they’re deprived of not only their livelihood but also their sustenance. So, they have to go and work for the white supremacists who orchestrated their demise in the first place because there’s no more water and no more fish. They’re further enslaved by working for minimum wage and are offered a promise for the future as long as they look up to the white supremacists, which makes them completely dependent. But the object is to keep them moving. If a Black person in the Northwestern Hemisphere has a second-generation home, then they come through and say a highway needs to be built there. That’s the technique. 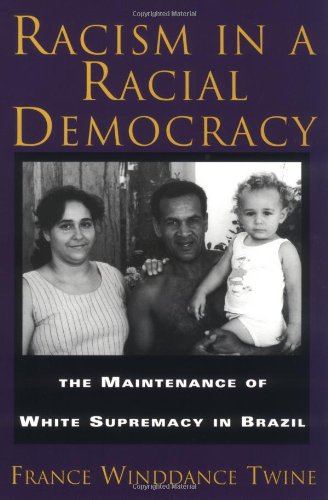 Racism in a Racial Democracy: The Maintenance of White Supremacy in Brazil Amazon Price: $24.95 $10.00 Buy Now(price as of Dec 7, 2015)
A unique analysis on the opinions of Afro-Brazilian's embracing the idea that racism doesn't exist due to myth of racial democracy, a subject this author touched on lightly in her article, "Chica da Silva: Queen of Diamonds". Is Brazil a racial paradise? Are race relations as harmonious as Brazilian leaders and Brazil's media would like us to believe? Or is it a carefully manufactured fairy tale? The truth of the question are found in the pages of this book.

4. White sacrifice - This is parallel to the racial showcasing strategy except the people in this case are white. Like any army or military operation, losses are expected and some white people are written off under the system of white supremacy. A lot of white people are aware of this. They don’t like it but they’re told this is the cost of doing business and it goes with the territory of defending the bigger operation. So, white sacrifice means there will be more and more white homeless people on park benches, begging on the streets, living under bridges, or panhandling. They will be greatly visible.

This is a tactic that has been used successfully because they know Black people are so busy watching each other instead of keeping an eye on their mutual enemy, little attention will be paid to the untold millions of white people who are doing well. For the handful of white people who’ve fallen through the cracks, the illusion is given that it’s not about race and that white supremacy is officially out of business. However, their numbers are negligible worldwide compared to the whites who are prospering. All four of these methods are designed for maximum, sophisticated confusion among the victims.

Continue to part 6 of The System of Racism and White Supremacy.