With last month’s star-studded baseball Hall of Fame vote resulting in no inductees to Cooperstown and Lance Armstrong’s awkward-at-best interview with Oprah Winfrey, it seems only right that we take a look at these athlete’s place of all-time steroid users.

Just making the cut is Olympian Marion Jones.  Despite years of denials, Jones admitted her doping in 2007 and is the only person on this list to serve time in prison (yet).

Jones competed in the Sydney Olympics, bringing home a female-best 5 medals (3 of which were gold).  Evidence mounted against Jones over the years – first ex-husband C.J. Hunter tested positive multiple times.  Then, when the BALCO scandal broke, Jones was one of the top names on the list.  In later interviews, Victor Conte, the founder of BALCO, claimed to have given Jones multiple types of steroids.  In the end the guilt was just too much for Jones, and in addition to her prison time, she was also stripped of her 5 Olympic medals.

The story continues to evolve with Rodriguez, and what seemed like a sure Hall of Fame career a few years ago is beginning to come into doubt.

Rodriguez is best known for his high-profile contracts throughout the years, the latest being a 10-year, $275 million deal with the Yankees.  He was the fastest player to 500 home runs, and at one time was considered a shoo-in to break the all-time home run record.  He admitted to steroid use in 2009, after reports linking him to past failed drug tests.  At the time, many people took him for his word as a foolish young player who was under tremendous pressure to perform at the highest levels possible.  However, reports in 2013 have also linked him to steroids over the past few years, most notable his comeback year in 2009 when he led the Yankees to the World Series title.  Fool us once, shame on you, fool us twice……

While never technically admitting to steroid use, Mark McGwire is one of the most high-profile suspected users, and is also one of the snubs of the 2013 baseball Hall of Fame vote.

McGwire was once regarded as one of baseball’s heroes, helping bring fans back to the game in 1998 with his famous home run chase against Sammy Sosa.  McGwire broke the home run mark with a then-record 70 bombs, but has been mired in controversy ever since.  It started with his name being found in Jose Canseco’s book “Juiced”, with Canseco claiming to have personally administered the drugs to McGwire.  He was also one of the stars brought before Congress to testify regarding steroid use, with the result being McGwire refusing to answer almost all of the questions posed to him from the Committee.  McGwire has stayed out of the limelight the past few years, but it’s clear that public opinion is against him, and unless something drastic changes, he will struggle to ever find himself in Cooperstown.

Bonds is also an athlete who has never admitted to steroid use.  In fact, he has had to defend his name more vigorously than anyone else on this list, and in doing so, has avoided prison time (for now).

Bonds holds many of the power hitting records in baseball, including breaking Mark McGwire’s home run record by hitting 73 in 2001.  He’s also won 7 Most Valuable Player (MVP) awards, the most of all time.  Despite this, there are widespread reports linking him to BALCO, along with his trainer, Greg Anderson.  Bonds was involved in an ongoing legal battle regarding perjury and obstruction of justice.  While convicted of the obstruction of justice charge in 2011, Bonds has not served any jail-time, and his appeal is pending.  He received just 36% of the Hall of Fame vote in 2013 and like McGwire is going to have a very tough time receiving any sympathy from voters.

Number 1 on this list is Lance Armstrong, who despite years of denials, recently admitted in an interview with Oprah Winfrey that he did in fact use steroids throughout his career.

Armstrong is best known for becoming the face of the fight against cancer, winning 7 Tour de France titles after winning his battle with testicular cancer.  He has been a very polarizing figure over the years, with people arguing passionately on both sides of whether he was doping or not.  Despite numerous teammate confessions, links to people connected with steroids, and the general connection of cycling to doping, Armstrong vehemently argued his case for over a decade.  At one time he had an entire nation pulling for him and pointing to his story as the “American Dream”.  Letting so many people down after showing he was living a lie is what makes Armstrong top this list.  It’s extremely difficult to think of anyone who will ever be able to top him – but if history has shown us anything, it’s only a matter of time.

Although not making the top 5, it would seem incomplete if we did not include these players in the article, as they have helped shape the national conversation over the years.

What do you think of the list?  Is there anyone else that would crack your top 5?

The Top 5 Ways to Save Money Couponing 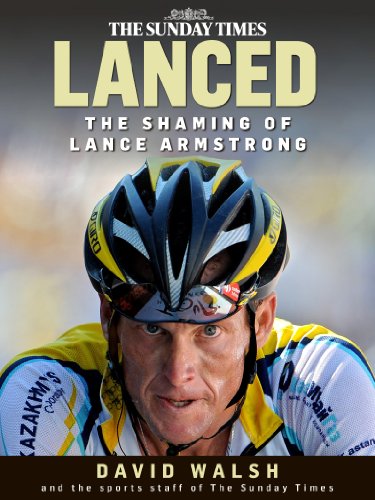 Lanced: The Shaming of Lance Armstrong Amazon Price: Buy Now(price as of Oct 23, 2016)
Next >> Origins of 7 Sports Traditions