The Top Windows Phones on the UK Market

Which Windows Phone Is For Me?

Windows used to be the red headed step child of the smart phone market. Old Windows models were tough to use and clunky, which was reflected in their sales figures. However, Windows is making a comeback, and the newest incarnation, Windows 8, is a strong competitor to Android and Apple operating systems. Widows 8 is slick, far easier to use and actually makes for a great user experience. Today we're looking at the top 10 mobile phones that run Windows. So, if you're on the lookout for a great new Windows device, then read on to get our recommendations.

The Top 10 Mobile Phones with Windows...

You'll notice that many of the phones on this list are the same brand (Nokia), this isn't because we're huge Nokia fans, but simply that there are fewer manufacturers of Windows devices than Android phones. When it comes to the top 10 mobile phones, Nokia is going to be king. But there are a few surprises on the list too...

The Lumia 925 is Nokia's newest model, launched in the UK in June, 2013. And it's stunning. Huge processing power, a 4.5 inch AMOLED screen and a great user interface combine to make the Lumia 925 by far the best Windows model on today's market. Even better, a new design means that the traditionally chunky Lumia now has an ultra slim aluminium body. An 8.7 MP Pure View camera takes incredible pictures, and is probably one of the best cell phone cameras on the market. Plus, you get a massive thirteen hours of talk time on the battery, meaning you have huge battery power. Oh, and whilst the aluminium body is sleek and thin, you can add a cover in a traditionally bright Lumia colour that will allow you to wirelessly charge your phone. The Lumia 925 is the best Windows phone right now.

It's not a top end Windows device, but the Lumia 520 is an excellent buy. In fact, it's one of the best bargains on the mobile market right now. A dual core processor and a 4 inch screen, plus a 5 MP camera, all for less than you'd pay for your average Android phone. But the thing that we like best about the 520 is the Micro SD slot that lets you pump up the low internal memory on the device for a low price.

Up until the release of the 925, the Lumia 920 was Nokia's flag ship Windows phone, and even though it's an older model it's still got some great specs. The 920 is one of the easiest Windows phones to use that we've ever seen, with Nokia's user interface streamlining the Windows operating system. The display is great, the camera fantastic, and there's plenty of processing power. And it's 4G capable, plus, you can even use the touch screen whilst wearing gloves. Not bad.

We're not sure why the Activ S isn't more popular, maybe it just gets over shadowed by the Nokia Lumia handsets. But you get a ton of processing power and a massive 4.8 inch touch screen (bigger than any Lumia screen). There's a Micro SD slot for added memory, and the display quality is second to none. If you're looking for a non Nokia Windows phone, then this Samsung model should be first choice.

The 820 is basically the Lumia 920's little brother, and you get many of the same features, including wireless charging, 4G capability and a great camera. The display is nice, but smaller than that of the 920 at just 4.3 inches. But you do get changeable covers, which is a nice touch.

Other than Nokia, HTC are probably the other manufacturer that are best known for making Windows phones. And the HTC 8X is definitely the sexiest and best looking of Windows devices. You get a nice sized screen that's crisp and clear, as well as some excellent amplifiers that make this a great phone for those that love music. But it does lack a little when it comes to processing power, and is nowhere near as powerful as a Lumia.

This is really Nokia's middle of the range phone, and it's a decent device. There aren't many top end features, but you do get a nice sized screen and some solid processing power. The build quality is as good as you'd expect from a Nokia, and the 720 has clean, defined corners making it look great. Plus, you get a Micro SD slot again, making it a decent buy for those that want more memory but can't afford top prices for internal memory.

Another decent hand set, with a Micro SD slot and a nice screen. The power here is average, but where the HTC 8S stands out is in looks. It's an extremely attractive hand set, very unique and beautifully designed. However, the battery life isn't up to much, and internet connectivity is slow at best. For casual phoning though, the HTC 8S definitely makes a style statement and is a perfectly solid mobile.

Unlike the other members of the Lumia family, the 620 has rounded edges and curves, making it seem more light weight than it really is. You get a nice display, a satisfactory camera and a good user interface. The battery life isn't great and neither is the processor, but with a price tag of just £150, they don't really need to be. The Lumia 620 is a great budget Windows choice, and will satisfy casual phone users.

Finally, a real budget choice. For under a hundred pounds, you can get a decent screen and enough processing power to do what you need, though there's no 4G capability and you lack in build quality and battery life. But if you don't have much to spend, then the Huawei Ascend W1 is the cheapest Windows device that you can find. 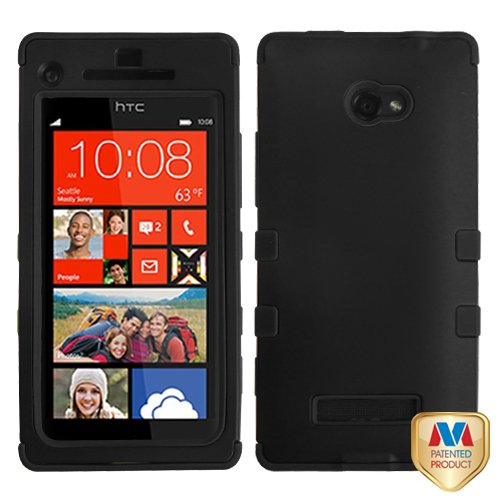