In recent years, Twilight movies have become the go to movies for people to watch just so they can hop on the trend wagon and write a scathing review. This is what happens when you put a bunch of critics into a theater with anything but an open mind.

It does not come as a surprise that when The Twilight Saga: Breaking Dawn Part 2 hit the screen the biased reviews also came out in droves.

While I can appreciate the Twilight films, I am not going to say it was the best movie ever.

While I find the films tedious at times, I am not going to jump on the hate train either. For this, I toe the line as best I can. Sometimes hopping from side to side at sometimes, but this is one of the most unbiased reviews you will find. I can take this movie or leave it.

After the lengthy exposition of The Twilight Saga: Breaking Dawn Part 1, the second part gets to the nitty gritty of it all. It picks off almost directly where the first movie left off. Bella has made it through here should be fatal pregnancy and if now among the cold skinned and shiny sparkly vampires. The first part of the movie follows her as she discovers her immortal powers and watches her child grow at an inhuman rate.

After a foreign vampire spots her with her child, we learn that it is strictly forbidden among vampires to turn a child into one of them, as children have explicitly poor self control. This brings on the wrath of the evil vampire overlords, The Volturi.

As the complete destruction at the hands of the Volturi loom over them, the Cullen clan must gather their allies to bear witness to Reneseme's unique origins and try to convince the Volturi that she is not as she seems. 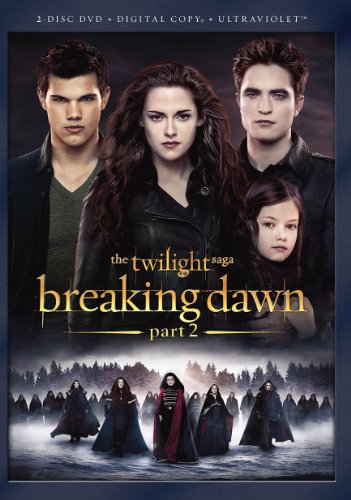 That is the basic premise anyway. While the plot promises a whole bunch of action, it sure takes awhile to deliver it. Lucky for the audience that this part of the Twilight story focuses a lot more on the powers that vampires manifest after they are sired rather than their happy shiny skin. The exposition is covered up quite nicely by distracting us with other vampires with a slew of neat powers.

Maybe it is just me, but these vampires seemed a lot more interesting in the book. Breaking Dawn Part 2 focused on only a few of the new vampires, which was sad, because I found the Irish ones the most interesting, but they had very little air time.

The story did a lot of its exposition fairly naturally, which surprises me because there was a whole lot of things to explain and wrap up. Natural exposition was never one of Twilights' strong points, it is good to see they finally got it right. On the last movie. Twilight Breaking Dawn Part 2 did at least go into better detail about some of the things that were still lacking information, like the Voluturi, Immortal Children, Imprinting, Vampire Powers, and various other vampires. There was a lot of information to fit into that movie, yet still so much that was left out. They remembered to stay focused on the important parts, but sadly the history of the other vampires got left out.

When the big action of the movie came, it was well worth sitting through all the things before it. The large battle seen was urgent and heart wrenching as you watched people you know and love die terribly. However, I can see why the haters of this movie give it such bad reviews. The battle scene does come with a huge twist at the end. I see the twist at the end of the battle as kind of a big "F*ck You!" to all the people that have watched it just to knock on it. The twist can also be seen as a big "thanks for watching!" thank you for the actual fans of the series.

While I feel that Twilight Eclipse was one of the best Twilight movies with the best battle scene, the battle scene in Breaking Dawn Part 2 does indeed give it a run for its money.

The actors, well, they acted. Every review has to talk about the acting. You know how Robert Pattinson, Kristen Stewart, and Taylor Lautner acted in the previous four parts? Yeah? Well they acted the same way. People will be happy (or sad?) to know that you only got to see Taylor Lautner take off his shirt once, and that was during a comedy relief section of the film. So no, I guess you will not have any rock hard bodies to drool over in this one. I was also extremely happy to see Joe Anderson, if only for a short while. He made an excellent vampire. His character, Alistair, was sort of an on screen example of how people think vampires should be. You know, all brooding and evasive to people. Jamie Campbell Bower on the other hand, makes the worlds' fugliest vampire.

This movie is not the best movie ever, maybe not even the best movie in the Twilight saga, but it does what it needs to to please its intended audience, and that is what counts. Twilight: Breaking Dawn Part 2 does not try to reach above what it has already got, it does not try to please the people that makes fun of it. Twilight Breaking Dawn Part 2 has the self confidence that everybody should has. It knows what it is and it is proud! I guess. It is a thing and not a person after all.

Anyway, the conclusion of Twilight Breaking Dawn Part 2 leaves its fans as satisfied as the book did and that is all it needed to achieve. Now to let this odd unity of hate over something pass until something new comes out and everyone jumps on the hate train again.