The Violence Against Women Act - Exploring The Cycle Of Domestic Violence

I wanted to write this article on behalf of all women struggling with domestic violence, emotional abuse, or stalking. This article is also dedicated to the women who never got a chance in life because the person they were with ended up taking their life. Recognizing the cycle of domestic violence could very well save a woman’s life and in this article, I will explain what to look out for.

I know I was a victim before and only being 18 was worse because I thought I was in love. It was my first serious relationship. Little did I know that the guy I was with had some dark secrets I never knew about.

The relationship started off fine but I began to notice a few things that didn't sit right with me. For example, he wouldn't let me wear certain clothes and even tried secluding me from my own family. Right away he wanted to move me into his place. This was 5 months after knowing him. I declined however it wasn't until 3 years later that I decided to move in.

I saw that he had a vicious anger streak. Anything that would happen, he would blame me. This is when things started to get worse. He would constantly hit me and I was afraid to leave, out of fear of what he would do. Before I get to the climax of the story, I’d like to talk about how the cycle starts in many of these relationships.

This is often where the man apologizes to his wife or girlfriend about something he had did. He is extremely nice - actually, a little too nice. This is his manipulative way of keeping her at arms reach because he knows that by keeping up his mean streak, he will lose her.

As the relationships honeymoon stage begins to end, it starts repeating the cycle with tension buildup. This is where two individuals aren’t getting along although it’s usually the fault of one person only. However, there are also times where they are both at fault.

When the two individuals finally have had enough of each other, things seem to explode. In most cases, this is where a fight breaks out and quite often, the woman leaves the man although it could also be the other way around. This is when the aggressor is the most dangerous.

One night at around 9pm, I was soundly sleeping on the couch. When I woke up, I was shocked to see I was tied up. My ex started questioning me about a hotel receipt that he'd found after going through my purse. The receipt was from a few weeks ago when my mom and I took a trip to Texas and stayed in a hotel nearby the convention location. He never believed anything I told him though. He turned off the lights and held two wires against my hands. I didn't know what hit me but I did know that my whole body was paralyzed and I was not able to talk. A pulse went through my body with such force that I thought I was going to die. He was electrocuting me with the wires and I saw my life flash right before my eyes.

After this, he had passed out to sleep. He did not sleep for 4 days. I had to get out of there. I broke free of the ropes and quickly yet quietly bolted out the door. I ran all the way to Best Buy and told one of the cashiers to call the police right away.

On a side note, I would like to explore red flags of a blooming relationship that women and even men need to be aware of.

Red flags of an abusive relationship

These signs also play a role in domestic violence. Although some aggressors may be verbally abusive, they may not hit you. However, we have seen that the majority of men and women who will verbally abuse their partner will also hit them too. Most often, when they have no respect for you by calling you names, getting mad for no reason, and even belittling you can lead to something more such as physical abuse.

As you can see, the Violence Against Women Act was brought forth for a good reason. Even if it starts off as verbal abuse, it usually escalates into something much more serious. Our dear president Clinton was right to take this act seriously and we have him to thank for signing it. Anyways, back to my story...

Long story short, he ended up in prison and I'm left with a fear of most men. I don't even talk or look at men because of what had happened. Ever since that happened, I have been afraid to connect with people. I still have the scars of being electrocuted too. According to the police, he was a heavy meth user. I never knew about meth as a teen but now I know why his behavior was so violent.

I'm 26 and married now with another man. I believe God brought him into my life for a reason. He is one of the sweetest guys I've ever met and has never put a hand on me or even yelled at me. I wonder how he is so calm all the time. He doesn't do any drugs either. He also doesn't drink at all which is what surprised me the most. When I'm with him, all my problems seem to go away. This is how relationships are supposed to be and you see, there are good guys in this world but you have to search for them.

How to leave an abusive relationship 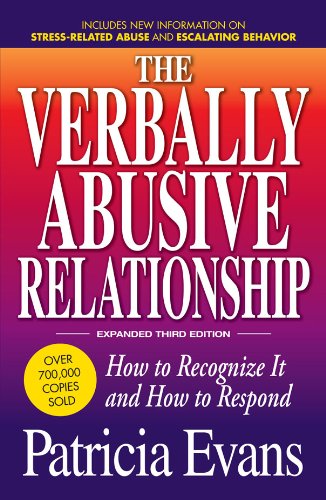 The Verbally Abusive Relationship: How to recognize it and how to respond Amazon Price: Buy Now(price as of May 8, 2016)
Next >> How to Infuriate Professional Musicians