The World of Catherine the Great

Sophia was born in 1729 to a poor German Prince named Christian August.  Christian August was part of a family line that ruled Anhalt-Zerbst, but unfortunately upon the death of the patriarch the family always partitioned the land amonst the heirs.  This led a kingdom that could be walked across in less than a day.  It also led to a lack of wealth, which was the reason why Christian August had to take a job for the King of Prussia and relocate his family to Stettin where Sophia was born.

During one of King Frederick William of Prussia's routine inspections of Stettin, Sophia was present.  To the shock and awe of the King of Prussia, her mother Johanna and perhaps her father Christian August she actually confronted the King.

"Why does the king have such as short jacket?"[1]  It took the King a moment to respond as he was a genuine shock and luckily he didn't have the August family beheaded!  Sophia was four when she asked why the King of Prussia didn't have a bigger jacket and it would be remakrs like this that would characterize her young life.  One of the greatest assets historians have about Catherine is her memoirs and it is in these pages that she discusses her childhood.  One such event that she discusses is her first meeting with the King of Prussia in 1733 when she was four, but she discusses other things that would not be commonplace or appropriate for a female to write about in the Seventeenth Century.

She also discusses the female Countess of Bentinck in her memoirs.  She describes her as a free spirited woman who did what she wanted.  Throughout her memoirs, Catherine wishes to be like the Countess and be her own woman not in thrall to any man.  Some historians believed the Countess to be a lesbian, but this can not be verified.

Additionally, Catherine discusses some other strange encounters she had as a youth in her memoirs.  Most memorably she discusses a fortune teller who predicted that she would wear three crowns.  Catherine did become the Empress of Russia so the prediction was mostly right. She memorably writes about a night in which a woman she was staying with slept in her bed because the woman claimed to be able to see dead people!  Also, Catherine discusses how her uncle wanted to marry her which was not uncommon in the Seventeenth Century, but still how would a young sixteen year old girl feel about her uncle coming on to her?

In totality, the beginnings for Catherine were rough.  She was plagued with illnesses and was often described as ugly. Her friends were strange fortune tellers, women who could see ghosts, and possibly lesbian royals.  Her parents were always aloof and favored their invalid son and she had to wear a back brace for over a year due to brittle bones. To top it off her suitors were family members and cousins.  Eventually she would marry her cousin the Duke of Holstein.

Holstein (pictured above) was close to Denmark and locked in a fierce rivalry with the nation.  It's leader, Grand Duke Peter would become Catherine's husband, but she wouldn't live in Holstein.  Peter was groomed from an early age to become the King of Sweden, the traditional ally with Holstein and an enemy of Denmark, but when Elizabeth (Peter's Aunt) became Empress of Russia she named Peter to be her successor.  This led Peter to forsake Lutheranism, and his chosen realm of Sweden for the cold wastes of Russia.

Catherine married Grand Duke Peter, but they lived a very unhappy life together.  Catherine had a very inquisitive mind; you may remember the first story of her meeting with the King of Prussia.  However, Peter was the opposite in almost everyway.  He liked to play with toy soldiers and as he grew older his mind remained that of a twelve year old.  Instead of playing with toy soldiers he had two regiments of troops that he would endlessly march back and forth across the parade grounds.  One time he even made them march half way to Siberia and back.  Peter was a drill master.

Due to their vastly different interests neither showed much love for each other.  As their marriage matured both husband and wife would become estranged and begin to court other lovers.  It is believed that all of Catherine's children were born to other lovers which meant that Peter the Great's line died with Peter the III.

Peter III would ultimately die to the hands of Catherine and her upstart rebellion.  After the death of Elizabeth, Peter III prepared to assume the throne, but Catherine was worried that she would be sent to a monastary and forced to become a nun.  This would automatically end the marriage and with it all of her power.  She devised a plan to overthrow Peter and with the help of her lovers she did so.  Peter III was incarcarated and "accidently" killed in a drunken scuffle with his captors.

With Peter III dead, Catherine announced that she would be the next Empress of Russia instead of announcing she would rule as a regent until her son Paul became old enough to become Tsar.

The reign of Catherine the Great lasted over thirty years and there are several notable things she did.  Chief among them was becoming an enlightened ruler.  Catherine ascended the throne during the peak of enlightenment.  Check out my article on the enlightenment here:  http://www.infobarrel.com/How_the_Enlightenment_advanced_Western_Culture

What was the Enlightenment?

Catherine's monarchy is remembered as a time of great expansion, reason, and power for the Russian Imperial Age.  Here are some of Catherine's achievements as Empress of Russia.

The achievements of Catherine the Great are vast, but not all of them are "good" or enlightened.

During Catherine's reign the land known as Crimea was aquired by the Russian monarchy.  This would allow Russia to build a port on the Black Sea and through it access the Mediterrean Sea.  This was seen as a huge boon for Russia and easily one of her top achievements in foreign affairs.  There were failures in her foreign affairs to be sure one of which was trying to open trade with Japan, but the aquisition of Crimea helped Russia become a superpower.

Catherine was able to reach a peace settlement with Sweden after a short war began due to the preceived weakness of Russia.  Gustuv III wanted to seize some territory in the north, around St. Petersburg, from Russia and thought Russia was over-extended due to conflict with Turkey.  The ultimate outcome was peace and a return to pre-war territorial boundaries.

Stanislaw August Poniatowski was the last monarch of Poland.  He was also a former lover of Catherine the Great and she was instrumental in placing him on the throne of Poland.  It was an attempt to gain a puppet kingdom by Catherine, but it backfired.  Ultimately, Catherine acted in greed and concert with Prussia and Austria.  Poland was partitioned amongst the royal houses of Eastern Europe and it wouldn't re-emerge as a nation until the aftermath of World War I.

Catherine was an enlightened monarch.  Despite her meddling with foreign kingdoms like Poland and wars with Turkey and Sweden she did care for the people of Russia.  She sponsered works of art, led to an increased culture, and built schools across the Empire.  It is for these reasons that she is remembered as a symbol of enlightenment in Russia and for the age.

While Catherine was not able to end serfdom she did leave the door open.  It was one of her desires to end the archaic pratice of slavery which would have been a crowning achievement in the eyes of enlightened Europe, but she just couldn't.  The nobles were adament and it would have been the death of her monarchy if she had ended slavery.  However, experiments were undertaken and limited freedom was granted in some places in Russia.  It would be her descendent Alexander II in 1861 who ended serfdom once and for all.

Revolutionary France was the tipping point for Europe and the end of the age of Enlightenment.  Catherine was entering into her final years when the revolution broke out in France and the monarchy there became severely limited.  She would survive to see the end of the monarchy and creation of a the first French Republic.  She would also see the horrors of the enlightenment as peasants reached a boiling point that led to the terror.

Her final years were marked by revolutions, but it would be her grandson Alexander I of Russia who had to deal with the French Empire under Napoleon.  It would be Alexander who finally defeated the French during the winter campaign in Russia and lead the coalition along with the British to defeat Napoleon in 1815.

Catherine the Great was a pivotal figure in modern history.  Her achievements are as vast as her Empire was.  She will always be remembered as one of the leading figures for reform in the Russian Imperial Era.  It would be her descendents who ended slavery and defeated Napoleon, but the list would also include the last Tsar who was killed by the Communists at the dawn of the Twentieth Century. 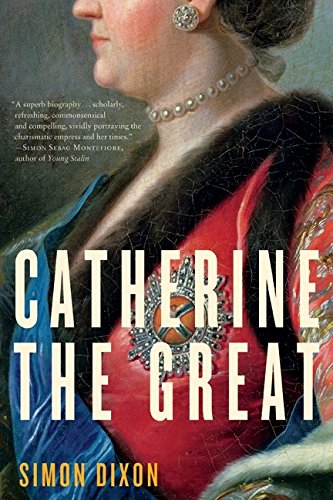 Catherine the Great Amazon Price: $16.99 $2.95 Buy Now(price as of Apr 7, 2016)
Next >> Fashioning a Reign: 90 Years of Style from the Queen's Wardrobe - Magnificent Exhibition at Buckingham Palace