The Year Without a Summer

Today many people fear that a warming planet will cause rising sea levels and extreme weather. But several hundred years ago, the concern was quite different. In the summer of 1816, some thought the sun was dying. It snowed in June in New England. Crops froze in the fields. We now know that the cause was largely due to atmospheric cooling caused by the 1815 eruption of Mount Tambaro in Indonesia. The extreme cold and crop failure was devastating at a time when most in the United States relied on locally grown food.  This fascinating period shows how unforeseen natural events can radically change the weather and the climate.

In an age before the Internet, or even the telegraph, news of a massive volcano travels slowly, about as fast as humans can travel. Few people in the United States would have known about the volcanic eruption in April of 1815, but they did notice the effects. A reddish fog that never dissipated, and brilliant sunsets, which you can actually see in paintings by famous landscape artists of the day. But by the spring and summer of 1816, everyone in New England felt the effects in a much more visceral way.

How Did the Volcano Cause Global Cooling?

When Mount Tambora erupted, it sent huge amounts of ash into the upper atmosphere, where it spread around the globe. The ash blocked some of the incoming solar radiation. Sulfur emitted by the volcano also played a role. It reflected the sun's rays, reducing the solar radiation even more. These effects lasted for several years, but the most noticeable impact began in the early spring of 1816.

Even before the events of 1815-1816, the weather had not been kind to farmers in the United States. Solar activity during the decade was already at record lows. It was the tail end of the  Little Ice Age (1350-1850).

According to "The Year Without A Summer" by William K. Klingaman and Nicholas P. Klingaman[1], the winter of 1815-1816 in the United States, surprisingly, was warmer than normal. With all the volcanic ash blocking the sunlight, you might wonder why the winter was so mild. The explanation has to do with how the ash particles affect the jet stream, which is the narrow air current in the atmosphere that moves weather systems around the globe. The ash particles absorb sunlight and reradiate it as heat in the upper atmosphere, but in the winter the northern latitudes get very little sun compared to the middle latitudes, so the ash particles did not warm the upper atmosphere as much as they did in the middle latitudes. This temperature difference in the upper atmosphere created a very strong, fast-moving jet stream that prevented cold air from moving north to south.

In the spring and summer, however, the northern latitudes get more sun, so the temperature differences in the upper atmosphere between the northern latitudes and the middle latitudes is less. This weakened the jet stream and allowed it to "buckle", sending cold air southward. This buckling of the jet stream is also responsible for the "polar vortex" event in January, 2014 that was widely discussed in the media.

Spring of 1816 Miserably Cold and Snowy

The first signs of the chill to come arrived in mid April, when a snowstorm covered Quebec City with a foot of snow. By the end of the month, 3 to 4 feet of snow had piled up in the area. May was worse. On May 14, it snowed in Albany, NY and the resulting freeze killed the buds on the fruit trees throughout New England. Ice formed an inch thick on the rivers[1].  Even at the end of the month, snow remained on the mountains. Most farmers could not plant crops because of the conditions. Those that did lost them.

Remarkably cold weather continued in June. If accurate weather keeping had existed at this time, the snowfall amounts and temperatures observed in June of 1816 would likely stand as records today. For example, on June 7th nearly a foot of snow fell in Montpelier, VT. Animals also suffered:

Some Vermont farmers who had recently shorn their sheep reportedly attempted to tie the fleeces back on the unfortunate animals, but many froze to death anyway. As in Quebec, wild birds flew into barns and houses to flee the cold.[1]

During early June, low temperatures in New York bottomed out in the low 20s. On some days, the temperature hovered around freezing. On July 8th and 9th, more freezes struck and damaged the crops that remained. In July and August, lake and rivers had ice in them as far south as Pennsylvania[2].

Some farmers tried to plants crops after the June snows, but the August frosts killed or damaged many of these crops. In 1816 most transportation was primitive. You could not easily import food from elsewhere, so communities had to survive on what they could produce locally. The meager yields meant price increases of up to 10 fold. Many suffered and famine was common, especially in parts of Quebec.

The extreme weather was not restricted to North America. Europe had an extremely wet, stormy, and cold winter, spring, and summer. The crop failures there led to riots. Parts of China also experienced bitter cold and famine.

Other Causes for the Cooling

Although most experts believe the volcano was the major culprit for the global cooling of 1816, there are other potential factors. Some believe that the period of warmth before the Little Ice Age disrupted the ocean currents that distribute heat around the globe. This warmth can introduce a large amount of fresh water into the oceans, disrupting the global ocean currents, which is also known as the thermohaline circulation[3].

The warming period we are experiencing now could produce the same effect, disrupting ocean currents and leading to a global cooling period[4]. We don't know if this will happen, but the fact that scientist seriously consider this possibility shows that climate is not always intuitive and predicting it is not straightforward.

If a year without a summer were to occur now, the impact would be less severe. We can always import food when needed and we can store surplus food more efficiently. However, in a global event food prices would likely rise dramatically, pressuring those with low incomes.

I think the bigger lesson is how natural events can dramatically influence the weather, sometimes far more so than humans can. It would be ironic indeed if a huge volcano in the near future were to induce a multi-decade long global cooling event just after we spend billions of dollars on carbon capture or other anti global warming efforts. In any case, let's hope we have neither global cooling nor global warming. Like Goldilocks, let's hope for a temperature that is just right. 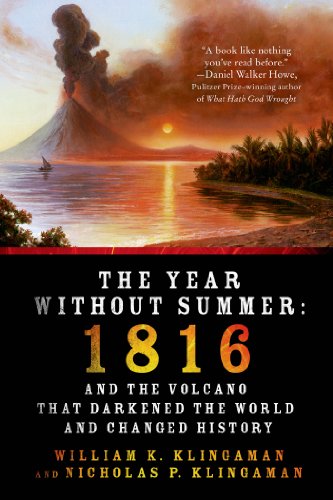 The Year Without Summer: 1816 and the Volcano That Darkened the World and Changed History Amazon Price: $15.99 $3.74 Buy Now(price as of Nov 11, 2014)
This book contains much more detail about how the weather of 1816 affected the politics and culture in the United States and in Europe. 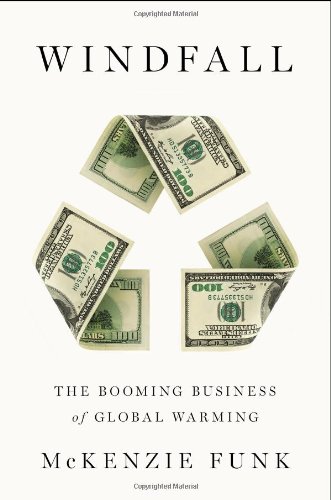 Windfall: The Booming Business of Global Warming Amazon Price: $27.95 $5.17 Buy Now(price as of Nov 11, 2014)
This book examines the economic impact of global warming.
Next >> Fashioning a Reign: 90 Years of Style from the Queen's Wardrobe - Magnificent Exhibition at Buckingham Palace