The lay out and structure of the Monopoly board has not changed, but nearly everything else has since Monopoly was introduced all those years ago (76 years and counting). There are now so many versions of this popular board game that it is impossible to keep track of them all. It seems that every movie blockbuster and successful TV series must have its own Monopoly edition. But not just these, because I have a collectible Beatles Monopoly set which features all of their classic songs as you stop at the ‘properties’ spots around the board.

The player’s tokens (Top Hat, Scottie Dog etc.) are changed to Beatles themes too and instead these and newer ones such as the Mobile Phone you get play tokens representing the greatest Beatles hit songs. These include the tokens for Strawberry Fields Forever, I am the Walrus and Here Comes the Sun. The location spots / squares are all famous albums and concerts by the Beatles

Many modern versions have realistic property prices and the money is adjusted to suit too because you now get the princely sum of $2 million every time you pass GO.  To save you doing math and counting money (I liked being the banker when I was younger and played the regular Monopoly board game with my parents) Monopoly uses an electronic, calculator, banker which also double as the die (which never falls on the floor anymore).

Some versions of the game uses a circular playing board which, as a traditionalist, I find disturbing as I think that board games need to be folded in half and opened as a square playing area, similar to draughts and chess. The properties too are replaced in some Monopoly versions (of pop stars) by albums and CDs. The biggest kick for collector is the set of pewter figurines that are matched to each special edition of Monopoly. These are very collectible for fans of the particular genre.

The Chance and Community Chest cards are replaced with Psychiatric Booth cards and Pitcher's Mound cards but the game play principle is the same as with regular Monopoly. Peppermint Patty, Marcy, Pig Pen, Woodstock and Snoopy squares replace the location squares. 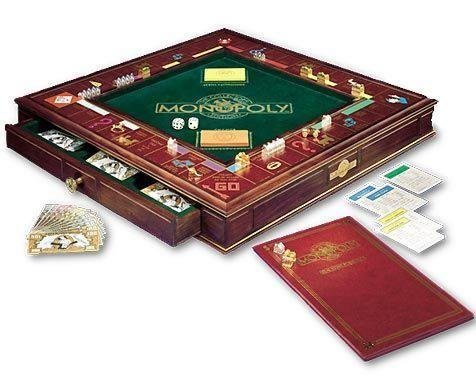 There are several other versions too including an Elvis Monopoly, Simpson’s Monopoly and an I-Love-Lucy edition as well as sets of other famous personalities.  There is a Monopoly Onyx edition which is mainly black in color. This set features a modern makeover with an onyx-toned game board. The houses & hotels are no longer green and red but are see-through. The dice are black and silver and the game play tokens are metal but have a nice black-finish. An onyx Scrabble set has also produced.

Another nice set is the Spider-man Monopoly but there are so many to choose from including NFL sets plus Luxury, Deluxe and Anniversary Editions of every kind, which can be quite expensive. A chocolate version of the game was made over 30 years ago and a jeweler once made a combined gold and diamond Monopoly set which was valued in excess of $2 million. The chocolate set was more moderately priced at just $600. 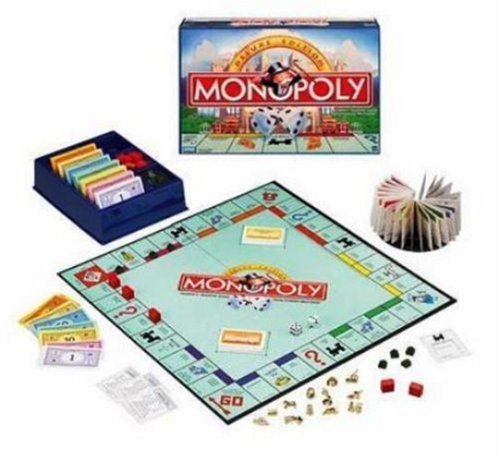