Come on down to Central Florida.   Find your voice writing with Infobarrel.  Sign up here. BoomerBill
InfoBarrel is a writing platform for non-fiction, reference-based, informative content. Opinions expressed by InfoBarrel writers are their own.
InfoBarrel > Travel & Places > Places > United States

Things to Do in Orlando: Check Out Our Many Lakes

The large fountain in Lake Eola is a central feature of the lake and a major landmark in Central Florida.

The Orlando Area has an Abundance of Water

The Lakes are Everywhere

One of the most prominent features of life in Central Florida is the abundance of lakes.  They are everywhere.  When you first fly into Orlando International Airport or Sanford International Airport, the two major airports in the area, you look out the window and are struck by the amount of water in the area.  You are also keenly aware of these water bodies when you attempt to drive through residential portions of the City of Orlando.  Roads seem to stop or meander.  The reason for this is the number of lakes in the city.

Why Does Central Florida Have So Many Lakes?

Central Florida tends to be very flat.  The topography is something like a pool table.  Given the large amount of rainfall in our subtropical climate, the water needs to collect somewhere.  Farther north where there is more varied elevations, water is funneled into rivers.  We don’t have that same sort of funneling here due to the generally flat topography.  The water collects into lakes and ponds instead of rivers.  Most of these bodies of water were created due to “solution processes” in which the underlying limestone base is gradually worn away and groundwater reaches the surface to collect into pools.[1]  Voila, we have lake formation.

Things to Do: Visit Lake Eola

Famous for its Fountain

Situated in the midst of Downtown Orlando lies Lake Eola.  Every things to do list for Orlando should include visiting the park surrounding the lake.  This body of water is known for its large fountain.  The path around the water, which is used by many for weekend meandering and workday walk breaks, is almost one mile around.  Eola Park offers a farmer's market every Saturday morning and most running races in the vicinity of Downtown Orlando have a start and finish close to the park.  The park has many swans which live there.  This is one of the few bodies of water in the area not used for fishing and boating.  The park does feature swan shaped paddle boats for rent.

Lake Eola was formed by a sinkhole, which is common for bodies of water nearly circular in shape in Florida.  The water is deeper than most with an average depth of over eleven feet.  There is an amphitheater on the west side and a chinese pagoda on the east side.  Many wedding ceremonies take place in a small area close to the pagoda.

Things to Do: Go to Sanford and See Lake Monroe

The Easterly Gateway to the Orlando Area

Sanford lies on the southerly border of Lake Monroe.

Lake Monroe[6] is fed by the St. Johns River and is a central feature of downtown Sanford.  Lake

Credit: wikipedia commons public domain - http://commons.wikimedia.org/wiki/User:Ebyabe Monroe is 15.06 square miles and is bounded by Deltona and DeBary on its northerly shore and Sanford on its southerly shoreline.  Due to the tie in with the St Johns River, Lake Monroe has the most boat traffic of the Central Florida lakes.

Your things to do list in the Orlando area should include strolling the waterfront in Sanford at Fort Mellon Park.[7]  There is also an adjacent marina with quite a few boats to see.  Downtown Sanford contains a historic district for exploring the shops and evening fun, including the well known German restaurant Hollerbach's Willow Tree Cafe.  This restaurant is one of my favorites with authentic German food and live entertainment on weekends.  You see young and old there, from retirees arriving by bus to college kids hanging out.

The average depth of the water is about 5 and one half feet and its maximum depth is 16 feet.  There is more of a current in this lake than most in Central Florida because of the St Johns River.

Things to Do: Check out the Harris Chain of Lakes

A map of showing parts of Lake Dora, Lake Eustis and Lake Harris.  The Dora canal is a narrow channel between Lake Dora and Lake Eustis.

Let Everyone Know You've Been to Mount Dora 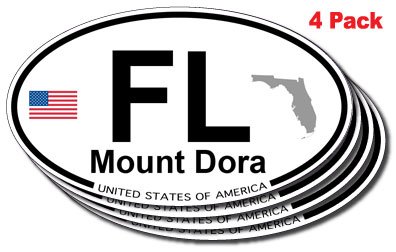 The major lakes of the Harris Chain are Lake Dora, Lake Eustis, Lake Harris, Little Lake Harris and Lake Griffin.  This chain of lakes is located in the aptly named Lake County, Florida.  The Lake closest to Orlando is Lake Dora, which is about a 45 minute drive from the City.  Each of these bodies of water are known for fishing, skiing and boating, although fishing and skiing are more prominent on Lake Harris and Little Lake Harris than the others.  The Harris Chain is well known for bass fishing tournaments.[8]  The waters are described as a source of trophy fish as opposed to a large volume.  The lake is deeper than most and the fish can be more difficult to find.[2]

If you travel to Tavares, the county seat, you will also see a seaplane hub.  Downtown Tavares has a seaplane base and marina[9] to attract seaplane enthusiasts.  It's not unusual to see boats and planes sharing the water adjacent to Tavares.  You can hitch a ride on a seaplane in Tavares and investigate Central Florida by air.  You'll love all our greenery.

Credit: wikipedia commons public domain - http://commons.wikimedia.org/wiki/User:EbyabeThe City of Mount Dora is known as a quaint hamlet with an abundance of shopping.  Strolling through the downtown area is a frequent weekend activity for those looking for something to do on a quiet Saturday or Sunday.  There's even a wood burning steam locomotive passenger train for day trips between Mount Dora and Tavares.[10]  Sunsets are popular in Mount Dora as the sun goes down over the water to the west.  Don't look for the mountain described in the name, you won't find it.

Traveling by boat or canoe through the Dora Canal[11] is a one of a kind activity.  Old cypress trees overhang most of the length of the canal.  There are usually many birds to see and sometimes a gator or two.  The canal is wide enough for two way boat traffic, but not much more.  Trailer homes also line the canal very

Credit: wikipidia commons public domain - Michael Woodsclosely.  Often people from these communities watch the boat traffic go by and they are always good for a friendly wave.  I have kayaked on the Dora  Canal but its narrowness and the number of boats on the weekend make this somewhat precarious unless you go on a weekday with little boat traffic.

Things to Do: Go See Windermere and the Butler Chain of Lakes

Check out the Map of Windermere! The Town lies in between the lakes of the Butler Chain.

Just to the south and west of Orlando lies the Butler Chain.  The bodies of water in this chain include Lake Butler, Lake Down and Lake Bessie.  These water bodies are known for their

Credit: wikipedia commons public domain - SPUIpristine nature, unusual for water so close to an urban area.  You won’t find any industry lining these waters.  You will see quite a collection of prestigious homes.  While water front homes are common in Central Florida, they are not created equally.  If you want to sight see some elegant waterfront living, the Butler chain is a great place to look.

The Town of Windermere[12] is a great place to visit.  Watch your speed, it’s known as a speed trap[13] to unwary visitors.  If you drive slowly, it’s a great place to go to spend a quiet afternoon.   On the way to Windermere you can drive by the entrance to the Isleworth subdivision.  This Arnold Palmer created community is the home of the rich and famous.  The infamous SUV crash for Tiger Woods occurred within the confines of Isleworth.  The adjacent waters are very popular for weekend boating, water skiing and fishing.

Things to Do: Go See the Restoration Area on the North Shore of Lake Apopka or Winter Garden to the South

Second in size only to Lake Okceechobe in Florida, Lake Apopka is a colossus in terms of size.  Unfortunately, due to pollution the large body of water is probably the most underutilized in the state for sporting purposes.  The water used to be bordered by "muck farms."  These farms caused a well known bass fishing resource to become almost a barren wasteland.  The phosphorous from these farms placed too many nutrients in the water.  At an average depth of around five feet and comprising over 30,000 acres, the lake is huge, yet few fish are found there now.  The algae and pesticides resulting from muck farm irrigation "killed" this former fishing destination.[3]

Credit: St Johns River Water Management DistrictThe muck farms were purchased by the St Johns River Water Management District, a Florida government agency.  The purpose of the acquisition was to stop further pollution of the water and to allow for gradual healing of the lake waters.  The water management district acquired more than 19,000 acres of land adjacent to Lake Apopka, which acreage now comprises the North Shore Restoration Area.  They are beginning pilot dredging operations as well in order to try to clear the lake of phosphorous and pesticide laden bed.[4]

The North Shore Restoration Area has a park and a trail to walk.  The area is known for the variety of birds available for bird watching.  The North Shore has many wetlands, which are hoped to help cleanse the lake over time.  The hope is that the North Shore will become an eco-tourism destination.[5]

The City of Winter Garden lies on the south end of Lake Apopka.  This small city has benefited

Credit: wikipedia commons public domain - http://commons.wikimedia.org/wiki/User:Ebyabe greatly from the development of the West Orange Trail, a 22 mile rails to trails project running through the middle of downtown.  The development of the trail led to a revitalization of the downtown area into a district of quaint pedestrian friendly shopping and gathering spots.  It's not uncommon to see cyclists jumping off their bikes and refueling at a restaurant or an ice cream shop.  Winter Garden is now a fun place to go.  The downtown even has its own heritage museum[14] to go along with the shops, restaurants and watering holes.  The downtown portion of the City of Winter Garden is now used as an example of revitalization benefits by rails to trails proponents.  While not the sole reason for the city resurgence, the West Orange Trail certainly helped push the city in the right direction.

It's not just theme parks 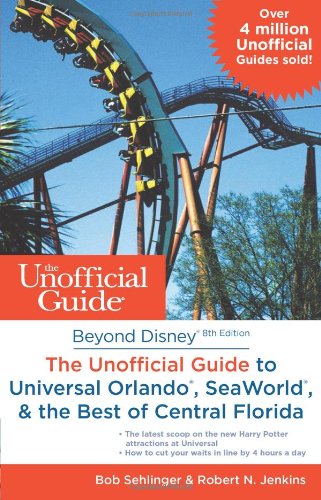 Beyond Disney: The Unofficial Guide to Universal Orlando, SeaWorld & the Best of Central FloridaAmazon Price: $17.99 $10.27 Buy Now(price as of Mar 8, 2014)
Next >> A Punishing Hike to Mt. Ypsilon in Rocky Mountain National Park