I've spent most of the past two decades in East Asia, holding lecturing and publishing positions in Hong Kong, Japan and South Korea. Among my favorite places are Taiwan and the Philippines. I'm fascinated by local religions and customs, and enjoy reading about history and how the English language changes and develops. I enjoy writing on InfoBarrel. If you love writing, sign up today.
InfoBarrel is a writing platform for non-fiction, reference-based, informative content. Opinions expressed by InfoBarrel writers are their own.
InfoBarrel > Travel & Places > Places > Taiwan

Top 7 Things to See and Do in Taichung

Taichung has long been considered Taiwan's third city, after Taipei and Kaohsiung. Unlike rainy Taipei it enjoys equitable weather year-round. It has never been as heavily industrialized as Kaohsiung, and so has better air quality and local culture that's less blue collar. The city has a population of 2.7 million (very slightly more than Taipei) and covers 2,215 square kilometers from the Taiwan Strait in the west to the fruit-growing mountain town of Lishan in the west. Taichung is easy to reach by car, bus, train or air.

The Art Gallery Green Parkway (so named because of its proximity to the National Taiwan Museum of Fine Arts; see below) is a new addition to the cityscape. As the name suggests, there's an abundance of shade and greenery. The paths are dotted with pieces of public art, and you'll come across as many locals exercising as tourists taking in relaxing vistas.

View paintings at the National Taiwan Museum of Fine Arts

One of Taiwan's two or three best art museums, the National Taiwan Museum of Fine Arts (NTMFA) is housed in a building seriously damaged by a 1999 earthquake which killed more than 2,400 people across Taiwan. Five years' of repairs and renovation were needed before it could be reopened. The NTMFA hosts a blend of permanent and temporary exhibitions in its 16 galleries. In addition to a strong and diverse collection of work done by Taiwanese visual artists (many of which were executed overseas), the NTMFA often showcases non-Taiwanese works of international significance. Best of all, admission is almost always free.

Learn about the world at the National Museum of Natural Science

Fancy doing something educational as well as fun? The National Museum of Natural Science has displays suitable for anyone over the age of eight. While here, do cross the road and take a look at the adjacent botanical gardens, which have over 700 plant and tree species on almost five hectares of land. The gardens are free except for the remarkable Rainforest Greenhouse (admission NT$20), in which you'll find a waterfall and stream as well as an abundance of tropical foliage. Admission to the museum if NT$100 for most people, NT$70 for students and free for seniors.

Ask the Happy Golden Buddha for a blessing

This 27m-high statue of a seated Buddha has a winning smile and an impressive belly. It's the highlight of Baojue Temple, founded in 1928 and located near the city's main stadium, 2.5km from Taichung Railway Station. The temple here is in fact a columbarium - a place where thousands of urns, each containing the ashes of a dead person who was cremated, are stored. The remains of Japanese citizens who died in the Taichung area during Japan's 1895-1945 occupation of Taiwan were moved here after World War II, when Chiang Kai-shek's Chinese Nationalists took control of Taiwan and purposely oblitered evidence of the Japanese era, including cemeteries.

Pray to the sea goddess at Dajia Jenn Lann Temple

The town of Dajia wasn't even part of Taichung until a local government reorganization a few years ago. It lies a full hour's drive northwest of the downtown, but has a lot more traditional character than the modern city center. Jenn Lann Temple is famous throughout Taiwan as the island's most important Matsu shrine; Matsu (sometimes spelled Mazu) is a sea goddess adored by many Taiwanese, approximately a million of whom visit the area each spring to take part in the deity's birthday celebrations and pilgrimage to Fengtian Temple in Xingang, around 15okm to the south. The truly pious walk all the way there and all the way back. If you don't have the time to get out to Dajia, but want to learn something about the popularity of Matsu, consider instead taking a taxi to Wanhe Temple.

A long bus or taxi ride from the city center, Fengjia Night Market is named after and right next to a private university. If you don't like crowds or cooking smells, don't go anywhere near this place (pictured here during a quieter moment). But if you want to try famous Taiwanese snacks like oyster omelets, barbecued squid and stinky tofu - or pick up some very inexpensive souvenirs or gifts - it's unbeatable. There's a pretty good selection of clothes but larger Westerners may not be able to find items which fit.

A great many of Taichung's mid-range restaurants are within walking distance of the Calligraphy Greenway. Options include Italian, Mexican, American, Japanese and Taiwanese aboriginal cuisine, as well as Taiwanese/Chinese. Also in that part of the city you'll find Le Moût Restaurant (reservations advised), whose head chef, Ms. Chen Lan-shu, won the 2014 Veuve Clicquot Asia’s Best Female Chef Award. She puts a local twist on French classics. Compass, a bilingual monthly, is an excellent source of information about newly-opened (and established) restaurants and nightlife spots.

For additional visitor tips about Taiwan, see my article 25 Things To Remember When Traveling In Taiwan. 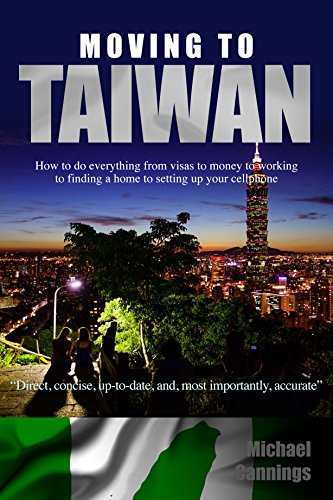 Moving to Taiwan Amazon Price: Buy Now(price as of Nov 23, 2016)
The best guide in existence for those relocating to Taiwan.
Next >> A Punishing Hike to Mt. Ypsilon in Rocky Mountain National Park