The province of British Columbia is about the size of all of the western Europe nations put together. The population in BC, though, is only about 4.5 million. Most of these people live in the south west portion of the province, including about 2 million in Vancouver. The rest of BC is very lightly populated. Prince George is the largest city not located on the coast of the Pacific Ocean. It is located virtually in the middle of BC. There are about 70,000 people in Prince George. British Columbia is the only part of Canada that contacts the Pacific Ocean. Because of this geographic fact, ocean trade is a very important industry. There are large shipping ports near Vancouver and at Prince Rupert. These facilities load ships with Canadian goods such as wheat, other grains, coal and lumber for export to China and other countries in Asia. Vancouver has a lot of container facilities which accept the bulk of Canadian imports of goods from China. In addition to the large ports, many other smaller ports are located on the extensive British Columbia coastline. These export lumber, salmon and other products to China and the United States. They also act as local sources for trade goods heading to Vancouver

Gateway to British Columbia for many travelers

The British Columbia geography is very mountainous. Many ranges of peaks stretch across the province. From the Coast Range in the west to the Rocky Mountains in the east, there is barely any location not dominated by mountains. Many of the peaks are very high and young. This causes them to be snow capped for much of the year with some hosting year round glacial ice. The peaks are very jagged which attracts very talented mountain climbers each year. Although there are so many mountains, agriculture is a big industry. The extreme south west of the province and part of Vancouver Island is important for dairy, livestock, wine, vegetable and other crop production. British Columbia is bordered by the states of Alaska, Washington, Idaho and Montana, by the province of Alberta and the Yukon territory. There is a large amount of travel between residents of the neighboring localities and British Columbia. The start of the Alaska Highway is in the province. This road was built in the 1940's as a way to ensure a land based supply route to Alaska. It remains a very important trucking route to this day. The Canadian terminus of cross country rail is at BC ports. Many goods, especially container packed and bulk commodities, are moved from ship to rail in BC for later distribution by rail to other parts of Canada. The Trans-Canada Highway originates in Victoria, the capital of the province, and crosses the 10 provinces as it stretches to St. John's, Newfoundland. The US Interstate "5" freeway crosses into British Columbia south of Vancouver. These, and other travel routes, allow for uninterrupted traffic from British Columbia to and from its neighbors.

Things to see and do in British Columbia

Visit Vancouver Vancouver is a large, modern city with many attractions for tourists and residents alike. It is home to the Vancouver Canucks of the National Hockey League whose players are local stars. The city is home to over 2 million people in a large area but retains a relaxed pace. Stanley Park is located at the downtown core and offers millions of visitors a year an urban escape. There are ski facilities just north of the city. It is often possible to ski and play golf on the same day.Visit Victoria The capital of the province, Victoria retains a historical feel. It was originally settled in 1858 and gained economic importance during the gold rush soon after. It is home to Butchart Gardens, a large horticulture display nursery built on an abandoned rock quarry.Visit Nelson This town boasts an impressive collection of heritage buildings that were constructed during the local silver rush around 1870.Wine tasting tour in the Okanagan Wineries have largely transformed this valley from a fruit production center to a major grape growing region. The valley is home to many vintners spread along it’s 200 mile length.Ski Whistler Home to many of the events of the 2010 Winter Olympic Games, Whistler contains two exceptional skiing facilities. In addition, other recreational activities in the area include back country snow skiing, mountain biking, hiking, rock climbing and wildlife viewing.Ski Grouse Grouse Mountain is located just north of Vancouver and offers residents a stunning view which includes the nearby city and the distant features of Vancouver Island.Grouse Grind This is a popular hiking trail located at Grouse Mountain. It is a grueling climb undertaken by many hearty visitors, primarily in the summer. Travel is allowed upward with returns accommodated by the skiing chair lift.View Kermode Spirit bears British Columbia has established official protection for the white Kermode Spirit bear. This bear is a sub species of the coastal black bear but it has genes that make it’s fur white. It is not a polar bear, despite the similarity in color.Whale watching The Pacific coast is visited by many species of whales each year and it is home to whale, porpoise and other marine mammal populations. Tourist services have been developed in various coastal areas such as Victoria and Tofino to transport people to viewing grounds close the the whales and other marine life.

This activity occurs on the ocean, generally in protected waterways. There can be some exposure to wet conditions. Customers need to check with operators to inquire about local weather and viewing opportunities.Sail the inside passage This largely protected waterway stretches from the marine border with Washington State in the south to Alaska in the north. Many passenger cruise ship lines, private yachts and commercial ship traffic travel on these waters virtually every day. 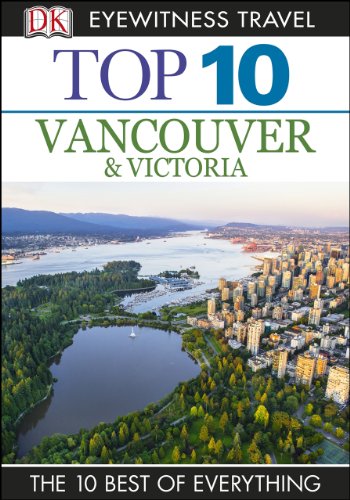 Top 10 Vancouver & Victoria (EYEWITNESS TOP 10 TRAVEL GUIDES) Amazon Price: Buy Now(price as of May 10, 2016)
Many visitors to the province will enjoy themselves in Victoria, Vancouver, or even both cities. There are many things to do in each location. Check out this highly rated travel guide.
Next >> Awesome Things To Do in Toronto

Where To Have Afternoon Tea in Victoria, BC