I like to write a variety of topics for  InfoBarrel including personal finance, travel, gaming, and health. Separate from IB, I also just self-published a new fiction adventure novel. My Author Page on Amazon
InfoBarrel is a writing platform for non-fiction, reference-based, informative content. Opinions expressed by InfoBarrel writers are their own.
InfoBarrel > Entertainment > Games > Board Games

Ticket to Ride – Board Game Review

Recently my wife and I been looking into adding to our board game collection.  Specifically we like games that require strategy but that aren’t overly complex or time consuming and also that can be played with a minimum of two people.  We received Ticket to Ride as a present this past Christmas and have played it several times since then, in groups ranging from two to four players.  Overall we’ve really enjoyed it, and found that it became more complex (in a good way) with repeat plays.

Ticket to Ride is a railroad themed German board game designed by Alan Moon and produced by Games of Wonder.  The goal is to collect more points than your opponents by the time the first player has played all of their train pieces.

Board - a map of the United States with several train tracks of various lengths and colors connecting cities throughout the country.

Train pieces – each player gets 45 in their color.  These are used to claim routes on the board.  When the first person uses up all of their pieces, everyone gets one more turn and then the game ends.

Train cards – there are 10 types of cards (9 different colors, plus one wild card) and they are used to claim routes on the map.  Players accumulate these in their hand with no limit to how many can be held at once.  When a player wants to claim a route on the board, they discard the appropriate number of colored cards in their hand.

Destination ticket cards – each lists a pair of US cities, and has a point total which is based on the distance between the two cities (for example, Seattle to Miami may be worth 20 points, but Seattle to Salt Lake City may be only 8).  At the end of the game, these point values are added to the players score if they completed the route, and deducted from their score if they were unable to complete the route.

Each player starts with 45 train pieces, 4 colored train cards, and 3 destination ticket cards (they must keep at least two of these).

On their turn, each player can take one action: 1) draw two railway cards from the draw pile; 2) choose two destination ticket cards (they may discard one of these if they wish); or 3) claim a route on the board by discarding their train cards and placing their train pieces on a track on the board.

Once a route on the board has been claimed by a player, no other player can take that exact route.

Play continues until one player has used up all of their train pieces.  Everyone gets one more turn after that, and then the game ends and the scores are tallied.

Points are awarded immediately when claiming a route.  The number of points scored is determined by the length of the route and goes up exponentially (ex. a 1 train car route is worth 1 point, a 6 train route is worth 15 points). The player with the longest continuous route is awarded a bonus of 10 points at the end of the game.

If you think you know where your opponent is trying to build, should you use some of your pieces to block their path instead of following your initial strategy?

When and how often should you take more destination ticket cards? The bonus points for completing these routes are essential to getting a good score, but if you get stuck with a route late in the game that you can’t complete you will lose these points, severely damaging your chances of winning.

Should you try for longest route bonus? It could backfire if you sacrificed other point earning opportunities and don’t end up with the longest route. 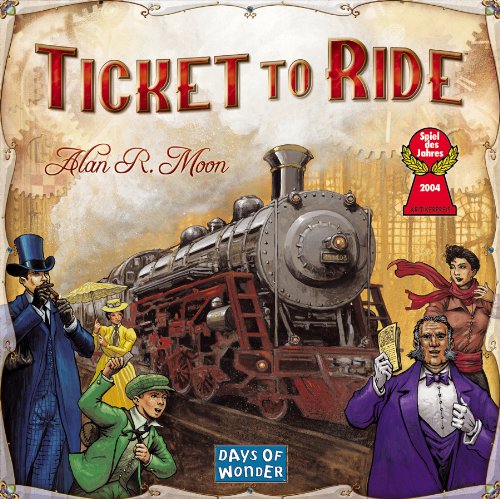 To be honest when I first read the game description, it didn’t really excite me too much.  However, it was highly rated and fit my criteria for what I was looking for in a new game.  It can be learned and set up quickly, and played in about an hour.  Since playing, it really has exceeded my expectations and is very entertaining.

The first time we played the game was fun but seemed a little too simple.  This was because everyone was only concentrating on their own cards without thinking much about their opponents’ actions.  In subsequent games we found that we realized how important it was to try to deduce what path your opponents were trying to take.  Thwarting their plans could be just as important as building your own route.  And of course if your opponents are trying to block your path, then that makes your decisions all the more important because you need to claim your route (or have alternative plans in mind) before they block you.

One of the best things about the game for me is how well it scales depending on how many people are playing.  Many games suffer when only two people are playing, because rules or strategy need to drastically change, but this game is just as strong in head-to-head play as it is in a larger group.

The negatives are some strategy game players may prefer a more complex game, although this is perfect for people who want strategy without needing to memorize a giant rulebook.  One other annoyance with the game is that the scoring process at the end of the game can be tedious, requires a calculator and often a recount.

I have only played the base game, but there are numerous expansions available which have also been highly rated.  I will probably try the European expansion next, which is supposed to require more complex strategies, but it may be awhile because this game is still keeping us very entertained. 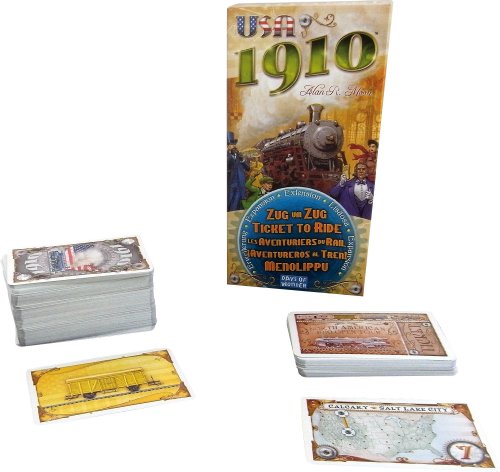 Ticket To Ride 1910 Expansion Amazon Price: $19.99 $15.00 Buy Now(price as of Mar 28, 2016)
An expansion for the base game which adds additional destination cards and gameplay variety.
Next >> Tokaido Boardgame Review