Joanne is self employed and loves to write about a variety of subjects, particularly health, food, pets and travel.
InfoBarrel is a writing platform for non-fiction, reference-based, informative content. Opinions expressed by InfoBarrel writers are their own.
InfoBarrel > Lifestyle > Food & Drink > Restaurants

There are several cultural fixtures that are identified with Canadian life.  The Tim Hortons restaurant chain is certainly one of them, although it is a fairly recent phenomenon.  From its humble beginnings almost 50 years ago, it has grown to the point where there are now over 4,000 restaurants worldwide.  This includes stores in the United States and United Kingdom. Recently they have begun an ambitious project to expand into the Middle East.

Over 3,000 stores are now in Canada.  Even small towns will have at least one Tim Hortons store.  It is one of the few places left where you can have lunch for $10 or less, including coffee and taxes.

It's not the best food you will ever come across, but it is better quality than most fast food places.  In addition, there are a few healthy items on the menu.  In the last twenty years, Tim Hortons has enjoyed  very rapid expansion and great success in Canada and elsewhere.

The History of Tim Hortons

The first Tim Hortons opened in Hamilton, Ontario back in 1964.  Tim Horton was a player with the National Hockey League, and he spent most of his career with the Toronto Maple Leafs.  He had the foresight to realize he wasn't going to be earning money in hockey forever, so he decided to start a business of his own.

At the time, his store only sold coffee, donuts, and some baked goods he made himself.  He befriended a police man named Ron Joyce, who often visited the place on his breaks. Both men had strong entrepreneurial spirits, and eventually a partnership was formed.  Joyce retired from police work and helped Horton expand to several other locations.  Initially they concentrated their efforts on Southern Ontario, and then moved into the Maritime provinces on the eastern coast. It would be some time before they started opening restaurants in the western part of the country.

Tim Horton died suddenly in a car accident in 1974. He was only 44 at the time.  Joyce offered the family $1 million for the rights to become the sole owner.  At this time, there were 40 restaurants.   It was a lot of money in those days, but in later years it turned out to be a great bargain.

Ron Joyce was a shrewd business man, even though he had no prior experience in this area.  He aggressively set out to expand the number of stores and add a lot of new menu items.  By 1991, there were over 500 restaurants located across the country.

Tim Hortons has had remarkable success the last two decades.  They began to rapidly expand in western Canada, and several years ago began their first international expansion by opening stores in American cities and town close to the USA/Canada border.

For the most part, they have done well in the United States, concentrating most of the restaurants in the eastern part of the country.  A few restaurants didn't make it and ultimately closed, but this is to be expected, even with a successful franchise.

In recent years, Tim Hortons restaurants have also expanded into hospitals, airports, and even to Canadian and American military bases.

Most restaurants are open 24 hours, seven days a week.  However, in Canada at least, they do close for Christmas and New Years.

Their coffee is by far the most popular in Canada.  In fact, they outsell Starbucks and other competitors by a large margin.  Their prices are very reasonable too.

You are guaranteed to have a fresh cup of coffee any time that you visit.  They have a policy that coffee must be served within 20 minutes of brewing.  This is why they use the slogan 'always fresh'.   It really is fresh coffee and it's delicious.

Another thing that is nice is that you can drink your coffee or other hot beverage out of a mug, and not a styrofoam cup, if you are going to consume it at the restaurant.  The coffee tastes so much better this way.  Many other fast food places do not offer this.  It's a feature that I really like and appreciate.

Their own brand of coffee is also available for sale at all stores, so you can take it home and brew it yourself.

The restaurant has several options for breakfast at really good prices.  They have paninis and bagels with egg, cheese and bacon or sausage.  If you are wanting to cut your carb intake, they also offer wraps with the same fillings.

Their hash browns are particularly good, as they are made with real shredded potatoes.  A breakfast consisting of a wrap, hash brown and coffee costs about $5, which is a really good deal.  As always, the coffee will be freshly brewed too.

Other breakfast options include oatmeal with mixed berries or low fat yogurt with fruit.  Breakfast items are only available until noon, except yogurt.  You can get that any time.

They offer several nice options for lunch.  Grilled panini sandwiches, wraps and cold sandwiches are all satisfying and quite good.  They offer a variety of soups and chili, which is a meal itself.  Recently they added a creamy chicken rotini to the menu which is served with garlic toast.

The soups and chili have enough seasoning without being too spicy.  I can't eat really spicy food, and have found the choice here is fine.

Customers can choose a combo meal which includes a sandwich, small soup, coffee or tea and a donut or cookie.  The cost is around $10, although it can be even less, depending on what sandwich you want.

This menu does not change for the rest of the day.  They also offer a good choice of hot beverages, including espresso and lattes, which are available any time.  For the kids, there is hot chocolate and apple or orange juice.

Their Own Coffee Delivered To Your Door 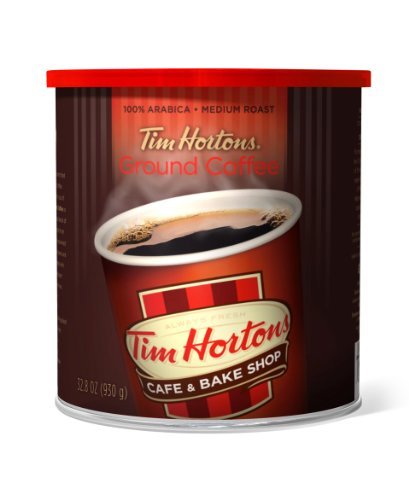 Tim Hortons Ground Coffee CanAmazon Price: $22.99 Buy Now(price as of May 30, 2014)
This coffee gets a remarkable 4.8 out of 5 star rating from over 200 customers. I have to agree with them, and find this coffee to be much better quality than many other brands. It's not too strong and has no bitter after taste.

One of the reasons why many Canadians love Tim Hortons is because of their committment to worthwhile causes.   Ron Joyce founded the Children's Foundation several years ago.  The purpose of the foundation is to send children to various summer camps in Canada and the United States.  They sponsor kids who would otherwise be unable to attend due to the cost.

They also take part in projects for local communities, such as free swimming in the summer, skating in the winter months, and drives and fundraising for food banks.

Tim Hortons is a nice place to have breakfast or lunch if you are on a budget.  The food is very  decent quality for the prices, and the coffee is one of the best you can get anywhere.  It is a family friendly place. I believe the food choices are better and they have healthier options than most fast food places.

What is all this Silverware for? - Rules for Fine Dining