Few people would dispute the fact that vegetables in general afford us a valuable source of nutrition. A balanced diet can quite simply not exist without consisting in substantial part of fruit and vegetable elements. The problem for many people regarding eating vegetables on a regular basis is that they are often deemed to be tasteless and unappetizing in relation to particularly meats or fish. This absolutely need not be the case and there are a number of easy ways in which it is possible to take vegetables to whole new levels of tastiness.

There are two principal reasons why vegetables are considered to be lacking in the taste department. Over cooking vegetables - particularly by poaching in water - causes them to lose their texture but also much of their nutritional value and taste to the water. It is easy to see why vegetables prepared in such a fashion would prove unappetizing. The second reason is that the vegetables may have been under seasoned or seasoned in an inappropriate fashion.

There is no hard and fast rule for getting around these potential catastrophic mistakes as different types of vegetables require cooking and seasoning in different ways. There is, however, one age old rule of thumb with regard to the cooking that truly can be seen to apply: vegetables which grow below the ground should be added initially to cold water which is subsequently brought to a simmer while vegetables which grow above the ground should be added to already simmering water.

Butter and nutmeg is added to cooked Brussels sprouts

Brussels sprouts must equally be one of the most disliked and under-rated of all vegetables. They are often the butt of jokes as well as the first foods kids will claim to dislike. The first mistake frequently made when preparing Brussels sprouts is in cutting a "+" shaped cross in the base before they are put on to cook. All this actually achieves is to cause many of the outer leaves to become detached from the main bodies of the sprouts during simmering. All that should be done instead is to slice off any damaged stem end from each sprout as well as to pull off and discard any loose or damaged leaves.

As vegetables which grow above the ground, the prepared sprouts should be added to a large pot of already boiling, salted water. The water in the pot should be brought back to a simmer for six to eight minutes only, the specific time determined by the size of the sprouts. This will ensure they are served still moderately firm and that the bulk of the goodness isn't allowed to bleed out of them in to the water and ultimately be poured down your sink.

You can test whether the sprouts are done with a metal skewer, a fork, or the point of a very sharp, slim bladed knife. They should still be moderately firm in the middle. Drain them at your sink through a colander and return them to the empty pot. Allow them to steam off for a minute or two to get rid of the excess moisture. Add a little bit of butter and a shake of ground nutmeg before gently swirling the pot to melt the butter and ensure all the sprouts are evenly coated. 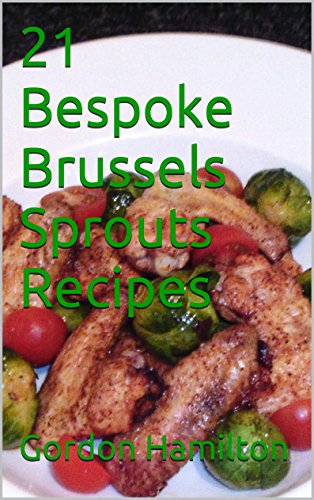 21 Bespoke Brussels Sprouts Recipes (21 Bespoke Recipes Series Book 3) Amazon Price: Buy Now(price as of Jan 31, 2016)
If you really want to get creative with Brussels sprouts and take them to levels you may never have dreamed of before, this downloadable e-book is likely to be exactly what you are looking for. It contains twenty-one very different and often unusual ways of preparing, cooking and serving sprouts to make anyone look at them in an entirely different way.

Cabbage is sauteed with red bell pepper and onion

Boiling or simmering it in water is probably the most common way of cooking cabbage. Unfortunately, the smell of boiled cabbage is pretty off putting at best and however long or short a period of time for which it is cooked in this way, the cabbage is almost certain to be bland beyond reasonable hopes of salvation. It is therefore much quicker, easier and more effective to saute it in a little oil.

Take three parts cabbage to one part white onion and one part red bell pepper. Roll and shred the cabbage leaves, peel and slice the onion and seed and slice the bell pepper. Bring a couple of tablespoons of vegetable oil up to a fairly high heat in a non-stick frying pan before adding the vegetables. Season with salt and pepper and saute for three or four minutes, stirring with a wooden spoon, until the cabbage leaves are just softened. Remove the pan from the heat before stirring through a little freshly chopped cilantro (coriander leaf) and serve immediately.

Baby carrots are sauted in butter

As over cooking is again the principal problem associated with bland and tasteless carrots, why not try serving them raw for a change? Start by washing or scrubbing the carrots as necessary and scraping or peeling off the skin. Cut off and discard the tops before coarsely grating in to a large bowl. Add some freshly chopped cilantro and a good splash of white wine vinegar or lemon juice to prevent oxidization. Season with a little salt and pepper and stir well.

If cooking the carrots by boiling remains your preferred option, start by peeling, topping and tailing them and cutting them in to little sticks or batons about the size of a little finger. Add them to a pot of cold, salted water and bring the water to a simmer for eight to ten minutes. Drain well, return to the pot and allow them to steam off for a couple of minutes. Combine six parts liquid honey to one part ground ginger in a small bowl before pouring over the carrots. Turn the carrots carefully through the honey with a wooden spoon prior to plating for service.

If you are able to obtain fresh season baby carrots as seen in the photo above, why not try sauteing them whole in some butter? Wash the carrots well and trim off any excess stem, leaving about an inch intact in each instance for presentation purposes. Melt half a stick of butter in a small non-stick frying pan and cook the carrots for two or three minutes over a medium heat, moving them around frequently with a spatula or wooden spoon. Season with a little bit of ground cumin, salt and pepper.

Cooking broccoli and cauliflower together

Although broccoli and cauliflower may look very different, their cooking methods and times are virtually identical. Why therefore not combine them to serve to your family and add a little bit of extra color to the plates as well as flavor? Split a head of each in to uniformly sized florets. You ideally want equal quantities of each vegetable. Put them in to a pot of boiling, salted water along with a couple of peeled but otherwise whole garlic cloves. Simmer for about eight minutes before draining through a colander and discarding the garlic. Allow to steam off for a couple of minutes and lose the excess moisture before plating.

Broccoli in a similar way is an excellent further addition to cauliflower cheese. Cook both of them as described above before stirring in to warm cheese sauce. Add to a heatproof dish and scatter with a combination of fresh breadcrumbs and shredded or grated hard cheese. Stick under your hot broiler (kitchen grill) for a couple of minutes until the cheese is melted and the breadcrumbs are lightly toasted.

Crushed potatoes with turmeric and cilantro

Potatoes are probably not the likeliest of vegetables to be deemed tasteless and unappealing but there is little doubt this can still very often be the case, perhaps particularly when they are boiled and subsequently mashed. Fortunately, mashed potatoes can easily be spiced up a great deal and given whole new levels of appeal and tastiness.

When preparing potatoes which are to be cooked for mashing, it is important not to cut them in to pieces which are too small. If you do, the pieces will absorb far too much water and your mash will be unavoidably mushy. Cut them instead in to chunks of at the very least one inch square before adding them to a pot of cold, salted water. Bring the water in the pot to a simmer until the potatoes are just softened and no more. This should take around fifteen to twenty minutes.

Drain the potatoes through a colander and return them to the empty pot. Leave them for a few minutes until the steam stops rising from them and the excess moisture has been allowed to escape. Butter is traditionally added at this stage before the potatoes are mashed but horseradish sauce is an excellent alternative as it works very well with potato. The potatoes should always be mashed with a hand masher and never in a food processor as that produces pureed potatoes rather than mashed.

If using pepper in plain mash, try using white pepper rather than black. It is not as harsh in flavor and does not leave unattractive black specks in the actual mash. Freshly chopped herbs also make for tasty additions, particularly chives, parsley or dill. If adding the herbs, do so only after you have mashed the potatoes or they will get stuck in the tines of your masher.

An interesting alternative to mashed potatoes is crushed potatoes. Wash but don't peel some baby new potatoes before boiling them in salted water until softened. Drain, allow to steam off and crush with the back of a fork before adding some butter and white pepper.

Lettuce incorporated in a simple, attractive and tasty summer salad

A lot of people believe that lettuce doesn't actually taste of anything. This is completely untrue and lettuce leaves of a variety of different types can prove incredibly tasty. The secret is to use leaves which are as fresh as possible and to season them well.

Wash the leaves and pat them dry with pieces of kitchen paper. Try rolling and shredding them before tossing them with some salt and malt vinegar. The vinegar in particular beautifully enhances the natural flavor of the lettuce. It can then be incorporated in a salad such as the one pictured above or simply enjoyed on a sandwich, perhaps with some sliced tomato and English cucumber.

Psychological it may be but good presentation really can improve the taste of vegetables and just about any other type of food. Try therefore to arrange them attractively on a serving platter or the individual plates before taking them to the table and the pleasing sight will get your family's mouths watering even before they take their first bite of your tasty preparations.

The tips featured above barely scratch the surface of what it is possible to easily achieve when cooking and seasoning vegetables. Careful experimentation can produce wonderful results, even by using additional flavorants that you already have available in your kitchen. Making the food texturaly superior, tastier and more pleasing on the eye in these ways will serve not only to help your family better enjoy their vegetables but may well go a long way to helping improve their overall health and feelings of well being.