The First Step to Improving Your Public Speaking Skills

Overcome Your Fear of Public Speaking

Toastmasters is one of the best and most cost effective ways to learn public speaking. Originally started in the United States in 1924, Toastmasters has expanded to thousands of individually run member clubs worldwide.

Toastmasters clubs are formed by individuals who follow the Toastmasters program and order materials from TM Headquarters. While each club is slightly different, they all basically follow the same program. Instead of being taught by a speaking coach or instructor, clubs consist of Toastmasters members evaluating and helping each other. Members give speeches and presentations, then - usually during the second half of the meeting - other members give evaluations. Clubs also focus on other things, such as leadership skills and impromptu speaking (Table Topics).

One of the most nerve wracking things for a first time Toastmaster to do, however, is the Icebreaker Speech. When you first sign up, you receive a couple of manuals to help get you started with the Toastmasters program - the Competent Communication and Competent Leadership manuals. The Icebreaker Speech is the first project in your Competent Communication manual, and is meant to serve as your introduction to fellow club members.

Having gone through the CC manual and seen plenty of icebreaker speeches myself, I have to say that there’s really no right or wrong way to do it. It is meant primarily to be an introduction to Toastmasters and public speaking - speak now, and learn from your mistakes later. Still there are a few simple tips for your Icebreaker speech that you can keep in mind.

Tell Us What We Don’t Know

The temptation for most first time speakers is to give the audience a fact by fact rundown of who they are. “Hello, my name is John Redway. I am XX years old, have several cats, and enjoy traveling and working overseas”. And so on, and so forth.

This isn’t a bad thing per se, but these are usually things that come up in the course of normal conversation anyway. At this point, you’ve probably attended at least a few Toastmasters meetings and are familiar with the regular members and guests of your club. You have no doubt made small talk and gotten to know many of them. So chances are, they already know the basic details of who you are, or will get to know eventually.

Try a different approach for your icebreaker speech - talk about something that is unique to you, or that other people wouldn’t guess by looking at you. If you have an interesting hobby that people wouldn’t know about in ordinary conversation with you, you can use that. Travel experiences, childhood dreams, a challenge you overcame - all make exciting topics for an Icebreaker speech. No matter what, though - keep the focus on you. It’s not uncommon to see first time Toastmasters talk about their best friend, or their cat, or someone else they know. Subjects like that can make great topics for later speeches - but for now, pick one great thing about yourself and introduce it to the group.

It’s also very common for people giving their icebreaker speech to not really focus on one thing. This is probably because it gives the impression that the audience will get to know them better, or also because having more than one topic makes it easier for newbies to write.

While it’s true that you shouldn’t worry about higher level speaking skills just yet - those will come in later projects, such as Your Body Speaks and Vocal Variety - focusing on one great idea is a skill you can easily implement now. Take one theme, and break it down into a typical speech template (Intro, Point 1, Point 2, Point 3, Conclusion). This will give your presentation a lot more focus, and you’ll end up with a much stronger speech in the end.

Your icebreaker speech is a time for you to act first and worry about mistakes later. As a new speaker, you probably don't know much about things like body language and vocal variety, so don’t be concerned too much about them in your Icebreaker. The time for learning the ins and outs of public speaking will come later. The first and most difficult step is to just do it. Your evaluator will give you encouragement and a good idea of what you need to work on next. So just enjoy yourself, and do your best to calm your nerves before starting.

With so many people having a fear of public speaking, Toastmasters is an excellent solution to their problems. Groups provide a mutually supportive environment in which members can help each other and grow. Your first speech might be the scariest part of joining the program, but that first step is also the most important. With these tips, you can make that first step to improving your public speaking skills that much easier. 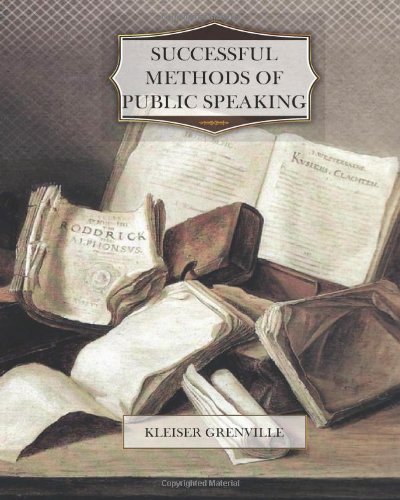 Successful Methods of Public Speaking Amazon Price: $9.49 Buy Now(price as of Oct 29, 2015)
Next >> A Guide to Preparing for the IELTS English as a Second Language Examination