The wide variety of parrot species endemic to Australia and their beautiful colouring makes it very difficult to choose ten of the best. Not everyone will agree with my choice but I've chosen ten for better or worse. I haven't included the budgerigar because most people are familiar with him. In the wild this little fellow is green and yellow, and not particularly flamboyant, so he hasn't made the list. However, as a caged species he comes in a very wide range of colours and has a well-deserved popularity.

In the interests of brevity, I haven't described the birds in too much detail, leaving the reader to see the beauty of the birds through the images – 'a picture is worth a thousand words' kind of stuff. And I've given a few interesting (I hope) details on their traits as aviary specimens. In each case, the image of the bird precedes the description.

Eastern RosellaThe eastern rosella (Platycercus eximius) is native to lightly wooded areas of south-east Australia and Tasmania. Feral populations are now found in New Zealand on both the North and South Islands. It is 30 cm long with a red head and white cheeks. 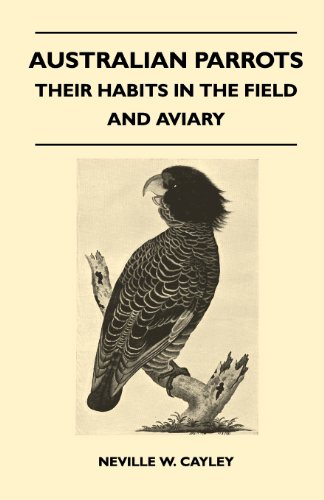 Australian Parrots - Their Habits in the Field and AviaryAmazon Price: $31.45 Buy Now(price as of Jun 16, 2014)
Learn more about the magnificent Australian parrots.

As a pet, the eastern rosella has a relatively loud voice and does not interact well with other species. It can only be kept in pairs. Once incubation starts the female receives almost all her food from the male. Up to 9 eggs are laid, one every 48 hours with incubation starting from about the third egg. From a fortnight old the chicks are fed by the male. Birds of 30 years of age are still able to breed and the species make good foster parents.

Credit: By Crusier (Own work) [GFDL (www.gnu.org/copyleft/fdl.html) or CC-BY-3.0 (www.creativecommons.org/licenses/by/3.0)], via Wikimedia Commons

Princess ParrotThe princess parrot (Polytelis alexandrae) was named in honour of Princess Alexandra of Denmark who became Queen of England when she married the Prince of Wales, Edward VII. The bird has a number of common names including spinifex parrot, rose-throated parrot, Princess of Wales parakeet, Alexandra's parakeet and Queen Alexandra Parrot (or parakeet). The subtle shadings of blue, pink and green make this a particularly attractive species.

Its native range encompasses dry plains and semi-arid terrain where dry and hard porcupine grasses grow. As a pet, the princess parrot needs to be kept in frost-proof enclosures. They mingle well with most other aviary birds although in the wild, they will come together and 'mob' predators as a group. They quickly become tame. Nest boxes or hollow natural tree trunks should be placed high in the cage. They lay four to seven eggs, starting incubation after the third egg. Newly hatched chicks are covered in long white down.

Mulga ParrotThe Mulga Parrot (Psephotus varius) is endemic to the interior of southern Australia where it frequents areas of arid scrublands and lightly timbered grasslands. It is also known as the many-coloured parrot and varied parrot. Mulga parrots as avian birds are relatively quiet and tolerant. They need protection from cold, wet conditions and are susceptible to worm infestation. Pairs become very attached and should not be split if at all possible. Three to six eggs are laid with an incubation period of 20 days. They need a lot of greenstuff and germinated seeds. In the wild they take in charcoal and this should be available to caged birds.

Red-Capped ParrotThe red-capped parrot is also called the pileated parakeet. It is related to the rosellas and occurs from Moore River in Western Australia southwards. Its natural habitat is marri forests but it has adapted well to farmland, orchards and suburban living. In Western Australia it is called the king parrot but should not be confused with Alisterus scapularis. It is 14 to 15 inches long with a long, narrow beak ideal for shelling seed capsules of the eucalyptus.

It is monotypic to its genus and goes by the taxonomic name of Purpureicephalus spurious. These birds sometimes destroy wooden structures and need a constant supply of fruit tree and/or willow branches. They also love their baths. While the voice is harsh, it is not particularly loud. They interact fairly well with other small species but usually remain shy and will hide when the aviary is approached. They are reliable breeders and the male feeds the female outside of the nest.

King ParrotThe King parrot (Alisterus scapularis) has a length of some 43cm. There are three species of these forest-dwelling parrots. The sexes are dichromatic in their plumage and colour of beak. The back and wings of the male are dark green and shoulders light green. The head, neck and underside are scarlet. The rump is dark blue and the is stripe of dark blue on the nape. The tail is greenish black. The females are green with a red belly and blue rump.

As an avian species, these birds do not gnaw. They appreciate an aviary of at least 4 metres. Nest boxes should be fixed high up and are more readily accepted if camouflaged with bark. If the male continually harasses the female, it is a good idea to clip a few of the male's flight feathers.

Eclectus Parrot One species of eclectus parrot qualifies as 'Australian' as it is found in north-eastern Australia on the tip of Cape York Peninsula. The Australian eclectus parrot was named in 1912 by Gregory Mathews and has the taxonomic name of E.roratus macgillivrayi.

The eclectus parrot has such extreme sexual dimorphism that it was once believed to be two completely different species. It was not until the early 20th century that the conundrum was solved. The eclectus parrot is a monotypic species. There are 9 or more subspecies and discussion continues on the correct taxonomic classifications for the various types.

The nominate race is a stocky, short-tailed parrot of some 35cm. The eclectus is strikingly coloured. The male is mostly a bright emerald green with a yellow tinge to the head. The female is bright red, darker on the back and wings. They are generally calm in captivity but are prone to feather destruction. Generally such problems are diet related. They need plenty of fresh greens and vegetables high in beta-carotene.

Crimson RosellaThe crimson rosella (Platycercus elegans) is medium sized, 36 cm long [14 inches], with the tail taking up much of this length. Of the five subspecies, three are crimson while in two, the red is replaced by yellow. The blue tail feathers of this bird are often found decorating the nests of the satin bowerbird.

Crimson rosellas needs a minimum five metre long aviary with strong wire mesh. They have a strong urge to gnaw and need a continuous supply of fresh branches. Four to seven eggs are incubated for around 20 days.

Bourkes Parrot Bourkes parrot (Neopsephotus bourkii) is small and the only species in its genus. It is a grass parrot of about 19 cm long. Its natural colour is a brown overall with pink abdomen, pinkish breast and blue rump. The adult male has a blue forehead and blue on the bend of the wing but this is usually missing in the female. The pink colouring helps the bird blend into the soil of its home in the 'red centre' of Australia. Bourke's parrot is crepuscular and a ground-feeder. It eats grasses and seeds. They are easy breeders in captivity but the young birds are very nervous after fledging and it may be wise to cover wire cages with reed-matting or brushwood.

Rainbow LorikeetThe rainbow lorikeet (Trichoglossus haematodus) is very brightly coloured although individuals vary markedly in their colouration. It is plentiful down the east coast of Australia to South Australia and into north-west Tasmania. It is an introduced species to Western Australia, Auckland (New Zealand) and Hong Kong. In Western Australia and New Zealand, the bird has been declared a pest. In Western Australia particularly, it dominates feeding areas and competes for nesting hollows to the detriment of native bird species.

Credit: By Tirin at en.wikipedia (Transferred from en.wikipedia) [GFDL (www.gnu.org/copyleft/fdl.html) or CC-BY-SA-3.0 (www.creativecommons.org/licenses/by-sa/3.0/)], from Wikimedia Commons

Port Lincoln ParrotThe Port Lincoln parrot (Barnardius zonarius) is the only Australian parrot that is green with a black head. As avian specimens, they quickly become used to their keeper.Small flocks local to a particular camping ground or caravan park also become very clever at filching food from picnickers.

They love a bath and need animal protein such as earthworms which they feed to their young. They lay four to five eggs and incubation takes 21 days. The young are covered in grey down feathers.

The amazing thing about all these parrots is the fact that they actually camouflage well in their native habitat, even those with bright, bright colours.

Australian Parrots, Third EditionAmazon Price: $57.95 $39.99 Buy Now(price as of Jun 16, 2014)
Next >> Zika: The Warnings About Wolbachia and Culex Our Health Authorities are Ignoring