As well as being an avid writer, I am also an enthusiastic gamer, anime fan, movie buff, and love of all things strange. Being as I live with a boyfriend, I am also particularly knowledgeable about cleaning and cooking. You can join me in my adventure of writing for money here at Infobarrel. Sign Up today! Also, I wrote a book! Check out The Guild today!
InfoBarrel is a writing platform for non-fiction, reference-based, informative content. Opinions expressed by InfoBarrel writers are their own.
InfoBarrel > Lifestyle > Shopping

Kids and kids at heart both love to play with nerf guns. These foam-firing classic toys make the perfect gift for those that want to be the favorite parent, aunt or uncle while they also serve as a fun and useful gag gift for adult friends. Whether kids need to defend themselves against the nerf assault from the kids down the street or couples need to blow off some steam, these toys are endless fun.

Unfortunately, not all nerf guns are created equal. Some models have a tendency to work really well, sending darts quite far for a few fires, but then just seems to quickly lose momentum in the springs. A good model is a reliable model, one that will fire darts at a consistent strength to a consistent distance for a long time to come. So when buying a new nerf gun, don't just focus on looks alone. Some of the most flashy guns are often the worst performers. This is a guide for those that want quality in the gun's performance over its flash. Nerf N-Strike Maverick Amazon Price: $14.99 $11.54 Buy Now(price as of Nov 6, 2014)
If I, personally, had to name my favorite nerf gun based on nothing but performance, I would always pick the N-Strike Maverick. I own several, I've used ones that belong to others, I've tossed them, dropped them, and even taken them apart, painted them, and put them back together again. Regardless, of what I've done to the Maverick, it still works perfect every time. It's a simple six shot pistol, but it packs a punch that makes it an excellent close to mid-range weapon. It loads like a revolver (you open up the cylinder and load darts one at a time), then you pull back the hammer and it is ready to fire a single, powerful shot. It's not the flashiest nerf gun on the market, but it is easily the most durable and reliable. The only downside is that it doesn't fire as fast as some models. I have also experienced some difficulties when using darts from other models. The Maverick uses the infinitely more fun plunger darts, but can occasionally get clogged when trying to fire the non-suction cupped plastic tipped darts, which makes no sense, but it happens. However, for those that don't need any serious speed in their nerf war, this $15 model delivers the best bang for your buck. 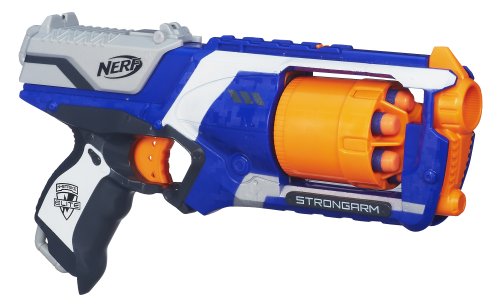 Nerf N-Strike Elite: Strongarm Blaster Amazon Price: $12.99 $12.88 Buy Now(price as of Nov 6, 2014)
The N-Strike Elite Strongarm Blaster is essentially the aforementioned N-Strike Maverick on steroids. I'll admit I have had less experience with this particular gun compared to the Maverick, but the time I have spent with it was quite positive. The Strongarm fires much like the Maverick in a strong single shot after pulling back the hammer, but it does load differently. Instead of loading from the back of the cylinder, it loads from the front with some of the dart sticking out. The little bit of dart poking out not only makes loading easier (and there for faster) but it is also easier to keep track of how many shots you have left. Alas, that can be an advantage for the enemy as well. Unlike the Maverick, the Strongarm fires the solid plastic pointed dart instead of plunger darts. This, combined with some improvements to the spring, makes the darts fire much further. Although, they also hurt much more at closer range. One of the major selling points of the Strongarm over the Maverick, aside from it shooting farther, is that it jams less. I can't attest to this as if you use the darts designed for the gun, I've never had either jam on me. At a slightly cheaper price of $12 dollars this may be the perfect gift for the frugal shoppers, although due to the pain of close impact hits and the strength needed to pull back the hammer, I wouldn't recommend this for smaller children. 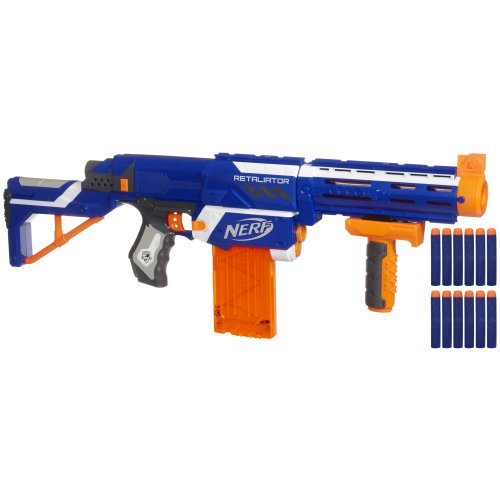 Nerf N-Strike Elite Retaliator Amazon Price: $26.99 $22.11 Buy Now(price as of Nov 6, 2014)
We've covered the most reliable models, but sometimes you just need a little distance and speed. The N-Strike Elite Retaliator looks like the kind of nerf gun that you can walk into a room with and tell every to say hello to your little friend. Alas, it is not. It only fires single shots, but boy does it fire them far. This gun comes with grip, barrel and stock attachments to provide stability, accuracy and range in different situations. It's best to keep then all on as it looks a little weird without them attached and they do improve performance. The Retaliator is billed to fire 75 feet. It certainly can fire 75 feet, but not accurately. Out of the box without the barrel attachment, you'll get accurate shots up to 25 feet, at most. However, with the barrel attachment, that range extends to around 50-ish feet before accuracy wears out. At 75 feet, regardless of attachment, the dart will start to corkscrew and blow in the wind, but it's a foam dart, what do you expect? Regardless of accuracy, the Retaliator can inspire fear in a nerf war. The darts move fast and far, making it an excellent weapon. With the 12 dart clip, it makes loading and reloading an absolute breeze. However, because it fires darts so far, the darts are likely to get lost easily and frequently. The gun only comes with 12 darts, enough to fill a clip, so those that do choose the Retaliator will want to pick up some extras. 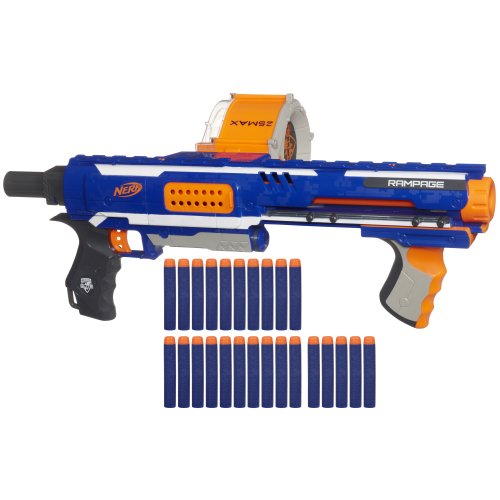 Nerf N-Strike Elite Rampage Amazon Price: $32.99 Buy Now(price as of Nov 6, 2014)
Aside from the Maverick, the N-Strike Elite Rampage is another one of my most favorite personal nerf guns. Honestly, this gun lives up to its name. It is an absolute terror on the battlefield, so much so, that we've occasionally banned them for our nerf wars due to fairness issues. Unlike all the other aforementioned guns, that Rampage fires both single shots and slam-fire (the nerf term for darts consecutively fired). The Rampage comes with a drum that holds 25 darts making it a terror in slam-fire mode and useful in single fire. In slam-fire mode, it can fire three to four darts per second up to around 60 feet (that's the furthest I've ever bothered to measure,) while in single fire mode the darts go to around 75 feet. Unfortunately, accuracy is a bit of a problem in either mode, but that isn't really the purpose of the Rampage. It's is definitely more of a spray and pray weapons. Unfortunately, while the Rampage has some huge benefits, it also has its flaws. Due to its high capacity ammo drum, it takes forever to reload. As far as I know, extra drums are not yet sold separately. There is also a problem with jamming. If the Rampage isn't loaded according to directions, it will cause a major jam. This can be a problem for kids if they are not diligently instructed how to load it. However, even with all its flaws, this is one of the best high-powered nerf guns on the market to date and anyone using them will definitely hold the advantage. 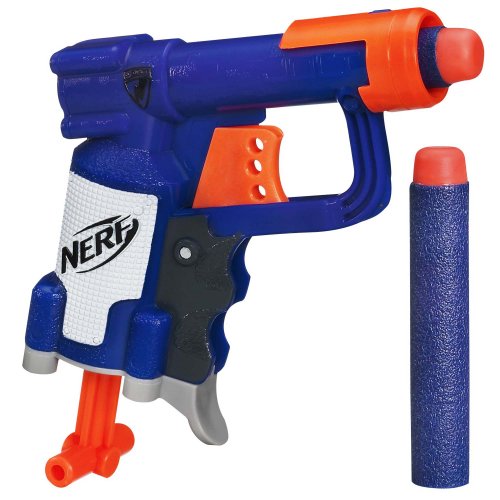 Nerf N-Strike Jolt Blaster (blue) Amazon Price: $5.99 $2.99 Buy Now(price as of Nov 6, 2014)
The N-Strike Jolt certainly isn't fancy. In fact, it is often passed up because it is downright piddly-looking. It only holds one shot and is tiny. However, due to its simplicity, it is easily the best performing, most reliable nerf gun on the market. All it requires is shoving the nerf dart in the barrel, pulling the little mechanism at the bottom of the grip and pulling the trigger. It works with every kind of nerf dart (excluding those round ones) and never, ever has it jammed on me. It is compact enough to fit in most pockets and surprise people, but it is also extremely powerful. This little gun can fire at least 30-40 feet so it will sting a bit at close range. This is the perfect model for families that want to have a nerf war, but don't want to break the bank doing it. The best part is that in most stores, this gun is often sold in kits with several Jolt nerf guns and extra ammo.
Next >> The 10 Best Baby Shower Gifts

How to Avoid Impulse Buying in the New Year