People love dogs, going so far as to make the fictional Fidos of the top ten cartoon dogs icons of pop culture.

Although many other cartoon critters have been anthropomorphic for decades, it's the dogs that usually wind up as all time faves.The best of these animated animals have engaging personalities (usually through clever cartooning and excellent voice-over work by their actors and actresses – Bill Melendez' vocal histrionics supplied to the "Peanuts" dog Snoopy are instantly recognizable).   Heads up – some great pen-and-paint pooches are on parade!#10 – Sandy (from the comic strip "Little Orphan Annie")Including this dog as a classic is due to its immense popularity back in the early part of the 20th century.

At this late date it is hard for us to imagine the wild appeal of Little Orphan Annie and her mutt, Sandy, but these two characters aced almost all others from the mid 1920s up through

Credit: public domainthe late 1940s.  They never really fell out of favor until the 21st century (the comic strip ended its run in 2010). The "no-eyes" thing?  Just some artistic convention of Harold Gray (Annie's creator, who died in 1968).

Sandy, the dog, was introduced as a puppy in January 1925 (about four months after the "Annie" comic started).  Annie rescued the pup from a gang of boys, then kept him hidden.  The pooch was discovered, and an adult man took the puppy in (Annie couldn't keep him where she lived).

A few months later in May 1925, Sandy the dog – magically all grown up – showed up again.  He rescued Annie from a group of would-be "gypsy" kidnappers, and the two were inseparable ever since. The dog saved Annie's fat on many occasions, but that "no-eye" thing makes him look like a Dog of the Dead.  Sandy is a little creepy (so's the kid, Annie, for that matter).#9 – Droopy DogHe's a basset hound.  Yet, in two different cartoons, he had a wrong last name – "McPoodle" in one, and "Poodle" in another.  Go figure.

Credit: MGM/Tex Avery1943.  He was unnamed then, and it wasn't until his fifth screen appearance his moniker of "Droopy Dog" was revealed. Droopy's appeal is his completely lackadaisical approach to everything – he never speaks or acts in haste.  His deliberate and laconic shuffling is what sets up the humor.  That voice, though, is classic.  Especially when he does a slow burn and quietly intones, "That just makes me so mad."#8 – Huckleberry HoundHe really ain't nuthin' but a hound dog.

This bumpkin barker of blue was a huge success for Hanna-Barbera beginning in the late 1950s.  Huckleberry (named, of course for Twain's "Huckleberry Finn") is from the southern

Credit: Hanna-Barbera United States, and he speaks with a hickish, slangy drawl.  Most of his adventures center around struggles to get (and keep) a paying job.

His successes are usually less of his own devising than they are a result of sheer dumb luck.  The Huckleberry Hound Show featured many characters that similarly gained in popularity – Quick Draw McGraw (the law officer horse) and Yogi and Boo Boo Bear also featured on Huck's show.Probably the quirkiest behavior, certainly in the 1950s in a cartoon (though live comedians/actors George Burns and Jack Benny did it in their sitcoms all the time), was the breaking of "the fourth wall" by Huckleberry.  Often, the action stopped long enough for him to tell the home audience what was going on, or what he was thinking.  Kind of avant-garde for a 'toon!#7 – Astro (The Jetsons, debuted 1962) The voice is familiar – oh, yeah, it's Don Messick who, seven years later, lent his vocal talents to the iconic Great Dane, Scooby-Doo.

Credit: Hanna-BarberaAstro was a "pre-owned" dog in The Jetsons (his real name was "Tralfaz", and his owner was a zillionaire named "Gottrockets").  George Jetson's son ("his boy, Elroy . . . ") found him in the fourth episode and brought him home.

A series of debacles later, and Astro was part of the Jetson family.  Astro's speech is not nearly as wry as Droopy Dog's or as erudite as Huckleberry Hound's – his command of the English language is somewhat limited, and he doesn't articulate very well (he calls George, "Reorge").  Still, there's an endearing dynamic between this sappy, loyal dog and the master, George Jetson (who pretends he really doesn't care about him much). #6 – Snoopy This is a global icon, but he wasn't always.

In the beginning, he was not much more than a backdrop.  At his début in the original "Peanuts" comic strip in October 1950 he was just a beagle puppy (his name was not given until some time in November 1950).  In

Credit: Charles M. Schulzfact, he was just there – clear ownership was not established until later (Charlie Brown even complained once about Snoopy's following him around, and another character tells Charlie that Snoopy is not following him, Snoopy just happens to live in the same direction).  Snoopy's first thought balloon appeared in May 1952, and he then nearly took over the strip in the public's mind. This hastily scribbled beagle is easily one of the world's most recognizable characters, regardless of species.  When the first animated Charlie Brown specials were made for television, Mexican-American animator Bill Melendez (1915-2008) gave "voice" to Snoopy.  The strangled sighs, whines, and "bleahs" Melendez used for Snoopy are incredibly durable – most people recognize the sounds immediately.  Snoopy will probably be popular as long as there are people on this planet. #5 – Scooby-DooThere's probably no need to correct anyone and say the real title of the classic mystery cartoon was Scooby-Doo, Where Are You?  It's unnecessary – just say "Scooby-Doo", and the ghost-hunting dog and his human pals

Credit: Hanna-Barberaall immediately pop into one's cranium.  They are that ubiquitous on the pop culture landscape.  Scooby-Doo, voiced by the same man who gave speech to Astro, has Astro's speech impediments.  However, his vocabulary is greater as is his cognizance of the world around him.

The team that makes up the group of teen ghost busters were all clichés in the late 1960s – Shaggy, however, although it seems as if he is supposed to be a hippie, is really a throw-back to the Beatniks of the early 1960s.  He was based upon a similar character played by Bob Denver (Maynard G. Krebs) in the sitcom The Many Loves of Dobie Gillis.Scooby has a close relationship to "the gang", and he is clearly Shaggy's dog (or "Raggy" as Scooby-Doo calls his owner).  Scooby-Doo's name is a bastardization of a scatting phrase Frank Sinatra used in his songs, "Ooobie-do-be-dooo", by the way.#4 – Mr. PeabodyAnarchy, thy name was Rocky & Bullwinkle & Friends.

This cartoon from the late 1950s through the early 1960s was a strange amalgam of children's programming combined with biting social commentary.  It also spent much time in gleefully turning social conventions upside down.  The Cold War antics of Boris and Natasha, the bad puns (that no child would ever understand: e.g., one character goes for a swim in "Veronica Lake"), and the general mayhem made for a cult classic with some modest mainstream success.

Part of the show's canniness involved a genius dog, Mr. Peabody, and his "pet boy" Sherman (a redheaded four-eyes).  Mr. Peabody used a time-travel machine of his own design to teach Sherman lessons about history.  These little cartoony adventures through time were elaborate set-ups for punch lines that could be either brilliant or real groaners.

Mr. Peabody, though, was smug, clipped in speech, and never doubted his genius (he was the template, apparently, from which the character of Sheldon Cooper of CBS' wildly successful sit-com, The Big Bang Theory, was drawn).  It was a strange character, and a fun one. #3 – Ren Höek The Ren & Stimpy Show, MTV's anarchic gross-out of the early 1990s, gave the world perhaps its first psychopathic canine.

Ren is one disturbed dog; he often physically and mentally abused his co-star, Stimpson J. Cat (otherwise known as "Stimpy").  The two live together and are always in each other's company, but Ren seems to actually loath Stimpy. The bottom line, though, is this show took mayhem to a whole different level; its takes on fairy tales were far more "adult" than the gentle "fracturing" of Bullwinkle and Rocky.

Ren Höek, however, is a cartoon dog unlike any other up to that time.  He will be remembered for eye-bulging rage, and the seethed phrase, "You eee-diot!" [Another little fun fact about The Ren & Stimpy Show: the singer April March, of the 1995 one-hit wonder song "Chick Habit", was an animator on staff.] #2 – Brian Griffin (Family Guy)He is urbane, intelligent, witty, but sometimes still just a dog that poops in the yard and gets excited over a squirrel.

Brian Griffin as voiced by his creator Seth MacFarlane is sardonic and sarcastic.  He is also smug and brilliant.  He is perhaps the only politically liberal dog ever created.  Brian's affairs with human women

Credit: Seth McFarlane/Foxsometimes suffer from his dogginess.  Although Brian drives, drinks martinis, and writes screen plays, he still occasionally chases things or is distracted by sudden movements – and he's afraid of the vacuum cleaner!

The solid dynamic between Brian Griffin and the household toddler-terror Stewie Griffin is one of television's best pairings; the room fairly drips with ire and snarky comments when the two are together.

Unfortunately, in the November 24, 2013, episode of Family Guy ("The Life of Brian") the character was hit by a car and killed off (probably in a move by Seth MacFarlane to free up some of his time at work).  Brian was replaced by a new dog, a Guido pooch named Vinnie.

This was a complex character for a TV cartoon dog and was one of the best ever created.  He will be missed.

Or, he would have been missed.

Apparently, it was either a publicity stunt or there was enough hue-and-cry, but Brian was brought back (via a shameless deus ex machina script) on December 15, 2013.  So, he aint' dead after all.  Long live Brian Griffin!#1 – UnderdogNever mind the spectacularly bad live-action big screen treatment of Underdog in 2007.   The 1964 cartoon episodes are the ones to watch.  Taking super-hero clichés and secret identity absurdities to a whole new level of satire, Underdog featured a lowly Shoeshine Boy (who is a dog) that turned into a mighty super-hero named

Credit: General Mills/NBC Underdog.  He used a phone booth for changing identities, but the phone booth always exploded in the process.  In times of waning super powers he ingested an Underdog Super Energy Pill (stored in a secret compartment in a ring he wore).

Underdog has craziness written all over its face – dog characters that casually live and work among humans without comment on their being dogs (Sweet Polly Purebred, Shoeshine Boy's objet d' amour,  is a female dog who works as a TV reporter).

This show is rich in other bizarre characters, but Underdog is the star.  He presaged Will Smith's destructive super-hero Hancock (2008) by over four decades.  Underdog, like Hancock, can't be troubled with such minutiae as collateral damage when he is on a heroic mission.  He will save Sweet Polly Purebred from the evil genius Simon Bar Sinister even if it means razing the entire city.  In one episode, when someone pointed out the path of destruction he left on one of his "rescue" operations, Underdog (who almost always speaks in rhyming couplets) says, "I am a hero who never fails; I cannot be bothered with such details."  Underdog got a Macy's Parade balloon that is now iconic.  As voiced by Wally Cox (a milquetoast put-on) Shoeshine Boy was humble, but Underdog was fierce.  And memorable. 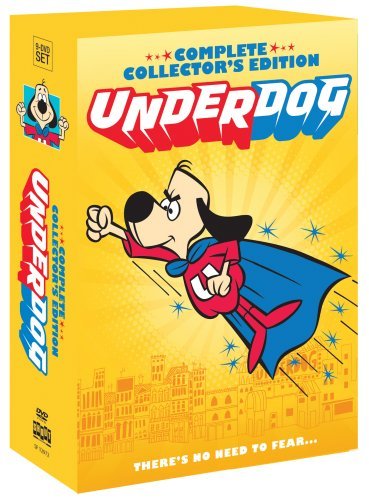 Underdog: The Complete SeriesAmazon Price: $69.97 $36.00 Buy Now(price as of Dec 30, 2013)
Next >> Lifetime Cable Channel Releases Yet Another Tell-All About Marilyn Monroe