The World's Best Selling Travel Book! The World is calling. Time to answer. 1,000 Places to See Before You Die, the second edition: Completely Revised and Updated with Over 200 New EntriesÂ [Paperback]
InfoBarrel is a writing platform for non-fiction, reference-based, informative content. Opinions expressed by InfoBarrel writers are their own.
InfoBarrel > History

Top 10 Famous Castles And Fortresses In The UK

The United Kingdom has an abundance of jaw dropping medieval castles and fortresses. It's amazing to be able to see and explore these places of illustrious history. There are many to choose from, all with their own part in shaping the world we live in today. Here is a list of the Top 10 Famous Castles and Fortresses to see in the UK.

Fortresses and Castles of Great Britain

One of the UK's largest fortresses and sits on an outcrop of volcanic dolerite 45 meters above sea level overlooking the North Sea. This mighty castle dates back to the 1st century BC. You can find Bamburgh Castle in Bamburgh, Northumberland.

The Tower of London

One of the most famous castles in the UK, also known as Her Majesty's Royal Palace and Fortress, is situated on the bank of the River Thames in London. The Tower of London oozes history and is home to the Crown Jewels. The White Tower was built in 1078 by William the Conqueror and the castle and it's complex of buildings were expanded later by Richard the Lionheart, Henry III and Edward I. These buildings have served as armories, fortresses, treasuries and places of execution. William Wallace (Braveheart) and Ann Boleyn were among some of the famous names executed here.

Built in 1068 by William the Conqueror, the impressive Warwick Castle sits proudly on a bend in the River Avon. Construction started in 914 as an earthen rampart built under the orders of Ethelfleda, the daughter of Alfred the Great, and grew through the centuries with the additions of towers and buildings. Also one of the top places to visit at Christmas in Britain.

Constructed in stone by Robert de Crevecoeur in 1119 and later belonging to Edward I, Leeds Castle remained a royal home for 3 centuries. It is situated 5 miles from Maidstone, Kent, UK.

Soaked in myths and legends of sword and sorcery, Tintagel Castle is believed to be the birthplace of the famous King Arthur.  This mysterious medieval settlement can be found in Cornwall surrounded by beautiful rugged coastlines.

Definitely one of the more famous castles and fortresses in the UK. Windsor Castle was originally built by William the Conqueror as a timber and earth construction before later being rebuilt in stone. Windsor Castle is the longest occupied and largest inhabited castle in the world. It is one of the Queen's three official residences.

One of the more famous castles and fortresses in Wales, this magnificent creation was begun in 1283 by Edward I as an important part of his conquest of Wales. Situated in Gwynedd and at the mouth of the Seiont River.

One of Scotland's most important castles. A residence for Scotland's medieval monarchs and where several of Scotland's Kings and Queens were crowned. Stirling Castle is associated with such famous figures as William Wallace, Robert the Bruce and Mary Queen of Scots. It boasts an excellent defense due to being surrounded on three sides by cliffs.

St. Michael's Mount is a rocky island crowned with a medieval castle and church and really only accessible at low tide. It can be found 400 yards off the Mount's Bay coast of Cornwall, UK

The perfect example of a moated castle, built in 1385 to defend against the French invasion during the Hundred Year War. Bodiam Castle is situated near Robertsbridge, East Sussex.

There are so many other famous castles and fortresses to be found around the UK and all over the world with a little research. For the complete works of these magnificent buildings from a military perspective check out the outstanding and best-selling book 'The Medieval Fortress '. 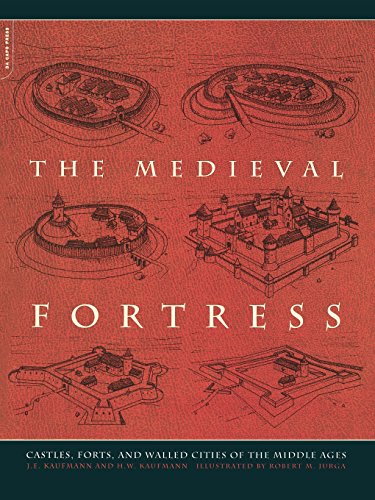 Related Reading: Top 10 Places To Visit In Britain - Great Things To Do In The UK