What Costumes Will Be Popular With Kids This Halloween?

If you ask many children, one of their favorite holidays is Halloween. Kids get to dress up in costume with weird hair and makeup and spend the day in school that way. Then, when school lets out, the rule of not taking candy from strangers is tossed out the window as sanctioned begging for sugary treats is permitted. Eating as much candy as you can along the trick or treat route (after parents have checked it) is allowed and even encouraged, as Mom and Dad want their share of the loot, too!

There are many classic costumes that are seen every year. Witches, ghosts, zombies and assorted fairies and princesses are always ringing my doorbell. Little ones are dressed as Elmo or Cookie Monster, while older kids tend to dress in the most popular costumes of the season.

Which Halloween costumes will kids be shopping for this fall? Here is a list of 10 of the most popular ones.

Disney has a smash hit on their hands. Not since Ariel debuted in The Little Mermaid has a

Disney princess made such an impact in the

merchandising market. Sofia is not an ordinary princess…she is the stuff fairy tales are made of. Her mother, Miranda, was a commoner who ran a shoe shop when the King, Roland, ordered a pair of shoes from her. It was love at first sight and they married shortly thereafter.

Sofia, an ordinary little girl, now must learn the royal ropes. She makes mistakes along the way-the same kind kids her own age would make-and she learns from in a fun and musical manner.

Disney debuted a Sofia the First costume that was constantly sold out in stores and online, despite the heft price tag. New versions of her royal highness’ purple dress is now available at a much reduced price. It looks just like the gown Sofia wears, and has her face as a cameo in the center. This costume for girls also comes with a tiara.

The Man of Steel was one of the top movies during the summer of 2013, breaking box office records left and right. Superman is an iconic American heroes for decades, and boys have dressed like him since his inception. No longer does a bath towel clipped together with a safety pin and a pair of blue jeans constitute a Superman costume. Now boys can look just like him, ripped chest and abs included.

This one piece Superman costume includes the cape and comes in several different sizes for boys of all ages.

Assemble the Minions-and Agnes, too!

Those lovable minions are once again stealing the hearts of kids and adults everywhere.

Credit: www.amazon.comDespicable Me 2 was another top box office draw for families, and it did not disappoint. Gru has a love interest, the girls are growing up, and those little pill shaped hellions, the minions are back with many scene stealing antics.

There are different minion costumes available-both Dave and Jorge. Each has his own distinguishing characteristics so you can tell them apart. Dressing like minions is also a terrific Halloween costume idea for twins!

Agnes is also a part of the Despicable Me 2 line of Halloween costumes. She is still sweet, loving and innocent, just the way grew wants her to stay. 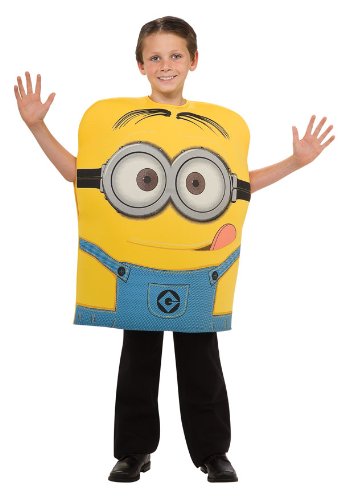 Despicable Me Child's Costume, Minion Dave Costume, Medium(US Size 8 to 10) Amazon Price: $9.99 Buy Now(price as of Jun 22, 2016)
This foam costume is light and will not weigh a child down. Add your own black sweatpants and yellow shirt to keep your child warm on a chilly October night.

Smurfette and Boy Smurfs, too!

In this summer of sequels, you can add the newest Smurf movie to the list. Smurfs 2 bringsback all of the familiar characters and introduces us to a new nemesis, Vexy. Gargamoyle kidnaps Smurfette, and the rest of the crew goes out o a search to find her .

Smurfette will be on the must have costume list for many girls. This girls costume comes in different sizes, The pants have an elastic waist for comfort and the dress is actually a long sleeve shirt that will keep a child warm. Also included is the white hat. For extra fun, buy some blue makeup to achieve the ultimate Smurf look.

You can create  family costume by having parents and kids dress as Smurfs!

In April Disney continued it’s success with the preschool market and debuted another program that shot to the top of the ratings. Henry Hugglemonster is a lovable five year old boy who as an intact family, brothers and a sister, and grandparents and friends who adore him. He gets into typical trouble that a five year old would get into, and of course, all is resolved after the 11 minute episode has ended.

At the present time, there has been no official Henry Hugglemonster costume released and plans for such have not been divulged as of yet. However, for Henry fans, this blue monster costume has the same coloring as he does. Younger kids will not really be able to tell the difference.

This also comes in infant sizes!

InCharacter Costumes Baby's Lil' Monster Costume, Blue, Small(3T) Amazon Price: $37.50 Buy Now(price as of Jun 22, 2016)
Although this is not an official Henry costume, it comes close enough so that it will pass inspection with toddlers and young preschoolers.

Disney/Pixar debuted their sequel to Monsters, Inc. in June to big box office success. Monsters University, a “G” rated family film, told the story of how Mike and Sulley met and introduced us to a bunch of lovable new characters.

There are many different kinds of Mike and Sulley Monsters University costumes from which to choose. 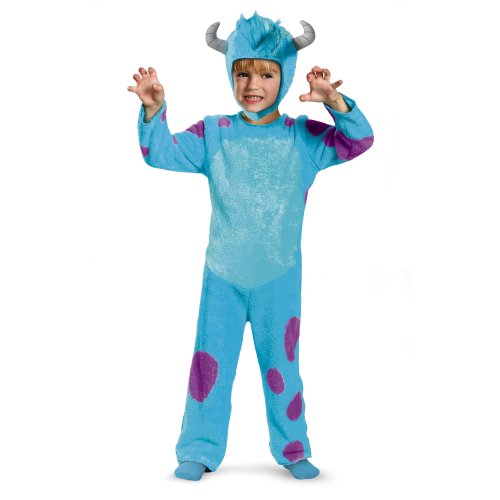 Disney Pixar Monsters University Sulley Toddler Classic Costume, 3T-4T Amazon Price: $16.09 Buy Now(price as of Jun 22, 2016)
This one piece ensemble will keep your kids warm as they trick or treat.

Cute as a Button! 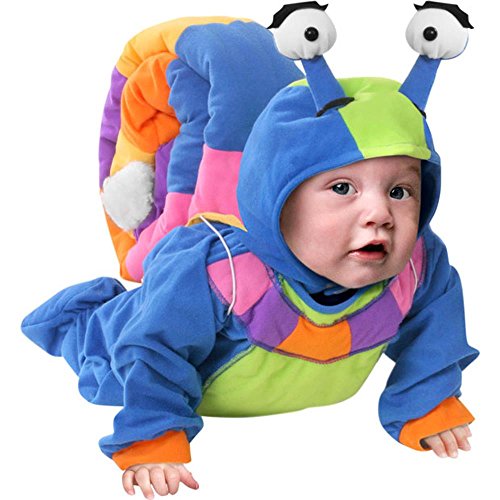 Unique Infant Baby Snail Costume Amazon Price: $20.00 Buy Now(price as of Jun 22, 2016)
Your baby may not win the Indy 500, but s/he will win cutest one on the block with this costume!
Next >> Frozen Halloween Costumes