What are the Top Kids Halloween Costumes for 2014?

When there air begins to get a chill in it, and the days become shorter as each one passes, children become more excited because they know that Halloween is just around the corner. This is perhaps the only time of year where parents actually permit their offspring to take candy from strangers-on any other day it would be forbidden.

My children are fast-they run from door-to-door with their friends.  In fact, there is an unwritten rule with the group that they go with-if you cannot keep up, then you need to go home.  They slow down for no one and after a while, kids do begin to leave and then it is down to the hearty few.

When they are done filling their stomachs with candy, I permit them to keep as many pieces as their age.  The rest is donated.  At the school my children attend, they make decorated bags and cards and fill it with candy.  Then a local military organization ships them overseas to the men and women in our armed forces.

It is always a mystery what costume my children choose to wear.  Here are the top Halloween costumes for kids in 2014 that will be among the top choices for kids everywhere.

Unless you have been living under a rock, you have at least heard about the mega blockbuster Disney film of 2013, Frozen.  With an amazing musical score that has not been heard on a Disney soundtrack since The Lion King, a storyline that features two bold female characters, an adorable snowman and a plot twist that no one expects, this film became a billion dollar blockbuster.

Frozen Halloween costumes are for all ages, even adults. Elsa’s Snow Queen costume has been a best seller since it’s release.

For fans of Princesss Anna, there are two dress up choices-the Coronation dress or the one where she searches for her sister.

Olaf is just a goofy character who steals every scene he is in.  There is finally a reasonably priced costume for kids. 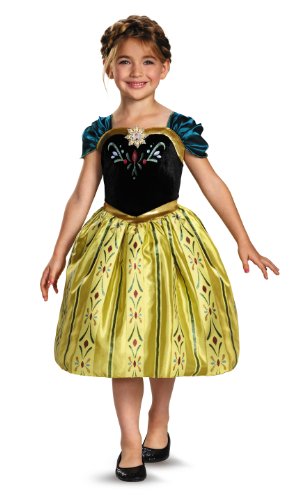 Disguise Disney's Frozen Anna Coronation Gown Classic Girls Costume, Small/4-6x Amazon Price: $12.99 Buy Now(price as of Jun 21, 2016)
On Coronation Day, Anna shows both glamour and style. This gold skirted dress is decorated and the black bodice has stitching that matches the dress. Pair this with black flats and tights to keep legs warm.

When the Planes series of movies was created, Disney planned it to be a trilogy.  The first installment appeared in late summer 2013 to a big success with the preschool crowd.  Summer 2014 saw the second part of the trilogy appear in theaters, and it was entitled Planes Fire and Rescue.

The protagonist of the first movie, Dusty Crophopper, once again stars as the plane that has to overcome many naysayers to prove that he has what it takes to succeed.

This Dusty costume for boys is sure to be on many most wanted lists.

Credit: www.amazon.comThis winter, Disney Junior premiered the very first Western aimed intentionally at the preschool set.  Sheriff Callie’s Wild West stars the vocal talent of Mandy Moore as the calico cat who is in charge of keeping things real in the town of Nice and Friendly Corners.  A cast of others teach young children life lessons while exposing them to the lifestyle of America’s old Wild West.

There is plenty of singing in each episode and kids have made this new program a hit.

While there is no official Disney costume, parents have been buying cowgirl costumes for kids in lieu of that.  Add a pair of cat ears to go on top of the pink cowgirl hat and you have yourself a cute outfit for girls to go trick or treating in.

Angelina Jolie’s portrayal of the much maligned Maleficent was an interesting one.  Fans of Sleeping Beauty always felt that she was evil for the sake of it, but after watching Maleficent, we know see the other side of the story.  A woman scored by her adored Stefan, we see how the thirst for revenge took an interesting turn in the film.

This Costume Comes in Tween and Junior Sizes 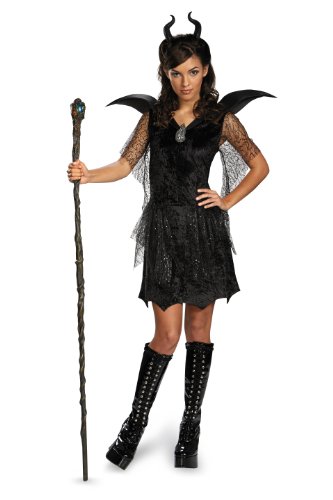 Disguise Disney Maleficent Movie Black Gown Tween Deluxe Costume, Medium/7-8 Amazon Price: $39.99 $38.24 Buy Now(price as of Jun 21, 2016)
This costume for girls is not like the old one with the purple stripes. This dress comes with a shiny brooch and collar. Add your own black boots and stockings to finish the look.

He’s been around for decades, and boys still do not tire of dressing as Peter Parker’s alter ego, Spiderman. Because of a bite from a radioactive spider, the teenaged Peter was enable with the same capabilities of strength and agility as the arachnid that changed the course of his life.

Spring 2014 had Spidey fans overjoyed as they were able to see The Amazing Spiderman 2.  He keeps getting more popular as the years progress, so once again this will be a top superhero costume for boys to wear.

This is Two Spiderman Costumes in One! 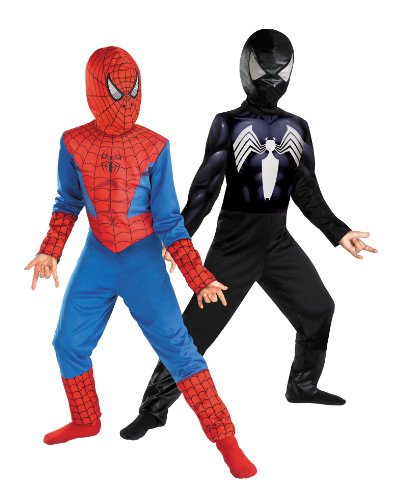 Reversible Spider-Man Red To Black Classic Costume, Child S(4-6) Amazon Price: $162.41 Buy Now(price as of Jun 21, 2016)
This highly rated costume is like buying two costumes for the price of one! There is the classic blue and red Spiderman costume that we are all familiar with. Turn it inside out to reveal the black side. It is a one piece jumpsuit with a separate hood.

Guardians of the Galaxy Costumes

Rounding off the top 10 Halloween costumes for kids in 2014 are the cast of the new Marvel film Guardians of the Galaxy.

The female lead is Gamora, and she is not one to mess with as she is a trained assassin. Drax the Destoyer is also trained to kill.  Rocket Raccoon is one gun toting mammal that you do not want to mess with. Groot is the most unusual looking of the Guardians, and a mask of his likeness makes for an easy costume to wear.

The last Guardian is Star-Lord, also known as Peter Quill.  It is because of his actions that the series of events unfolds.

Guardians of the Galaxy Groot Costume 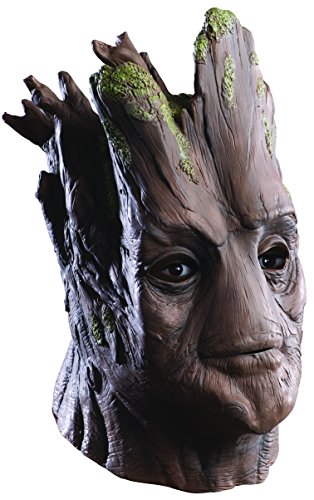 Rubie's Costume Men's Guardians Of The Galaxy Deluxe Adult Overhead Groot Mask, Multi, One Size Amazon Price: $9.41 Buy Now(price as of Jun 21, 2016)
"I am Groot!" is all you have to say when you are trick or treating.

Which one of the top 10 Halloween costumes for kids in 2014 will your child want to wear this fall?