I'm a huge fan of watching movies. I like, for both good and bad, to analyze movies. It's easy to become a little focused on details than actually enjoy the movie itself.
InfoBarrel is a writing platform for non-fiction, reference-based, informative content. Opinions expressed by InfoBarrel writers are their own.
InfoBarrel > Entertainment > Film > Movies

Film Review of The Godfather III

Just When I Thought I Was out, They Pulled Me Back In

When we get into the action in The Godfather III, Michael Corleone has become 60 years old. He has grown pretty tired of the gangster life. His greatest desire is to become an honest businessman and go legit. His enemies, however, are doing everything in their power to get rid of him.

Michael searches frantically for a successor. His own son refuses, to Michael's chagrin, having any involvement in his father's business. His son drops out of law school and instead focuses on a career as an opera singer. He finally manages to realize his dream and even though Michael is not happy with his choice to begin with, he cannot help but be proud of him when he succeeds.

Instead, the lot falls on Vincent, who is the son of Michael's brother Sonny. Vincent however, inherited his father's temper and threatens to bring the family rather to a new mafia war than against honest business. Michael is initially hesitant, but when he later finds out that an assassin has been set out to kill him, he give in and assign Vincent to do the task and let him take care of the situation as he see best fit.

Unfortunately, the third installment in the series about the Corleone family is not close to being as good as the previous two films. It is really only in the last hour, of the more than two and a half hour long movie, the movie gets exciting. Before that, it's mostly about how Michael wants to be accepted as an honest businessman instead of a gangster and no matter how you twist and turn the plot, it becomes less interesting.

In addition, the end feels like a real anti-climax. After spending a total of around eight and a half hours in the Corleone family life, I feel cheated. Coppola seems to have lost the craving and only want to end the story as quickly and easily as possible. Sure, it can sometimes be good with an open ending, but not here.

All the old characters, with the exception of Tom Hagen, are back and we also get to see Andy Garcia in the role of Vincent. He takes the role well, even if he in some situations feels a bit flat. However, he has a good chemistry with Sofia Coppola, who plays Michael's daughter Mary. Characters' aging (20 to 30 years) has been partly solved with the help of make-up but also by letting 16 years pass between the film two and three. Some aging has been done the natural way.

Godfather III gives us an end to the story of the Corleone family, however, it is not as good as it could have been, unfortunately. 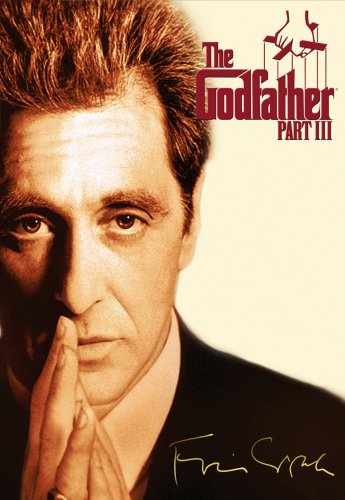