Do you hate setting your clocks? Do you have this underlying fear every night before bed that you are going to be late to work because your alarm clock was set to the wrong time? Well, it doesn’t have to be this way. The easiest thing you can do is to get yourself an alarm clock that automatically sets its own time without any help from you other than plugging it in. Sound too good to be true, well it’s not. There are literally dozens of different radio controlled alarm clocks available. Each one receives a short wave radio signal that is emitted by the atomic clock in Boulder, Colorado (at least if you live in the US). On most radio controlled clocks this happens several times a day so that your clock stays accurate to second all day everyday. If this sounds like a solution to your worries of being late then the following clocks may be of interest to you.

So Many Radio Controlled Alarm Clocks to Choose From

As mentioned above there are a countless number of different style radio controlled alarm clocks available, so many in fact that it might be hard to choose the one you like the best. So to help with this problem here are three of the top selling models on Amazon. Not that this makes them the best but with all the owner reviews you can feel more than confident in your purchase instead of blindly buying the first clock that catches your eye. You will also notice that all three of the models mentioned below are made by the same manufacturer, Sangean. The reason for this is that they make excellent radio controlled clocks some would even say the best. Anyways, in no particular order here are the RC alarm clocks you have been looking for. 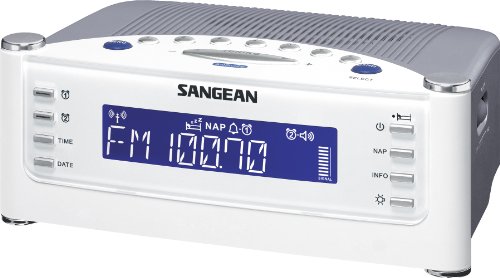 The first is the feature packed self setting Sangean RCR-22 AM/FM Atomic Clock Radio. It

Credit: Amazon.comcomes with a dual alarm that can be set to the AM/FM radio that has fourteen station presets (seven for AM seven for FM) or what Sangean calls the Humane Waking System (HWS) buzzer which starts out as a very low volume beep and gradually builds in intensity. This allows you to wake up slowly unlike traditional alarms that simply try to blast you out of bed. The RCR-22 also has two adjustable sleep and nap timers which allows you to set two different alarm times for each day a great feature for those that have the luxury of taking a nap in the middle of the day. Or if you wake at different times on different days, for example you might sleep in on the weekend then you can set a different alarm for those days. Another feature that is simply genius is the sleep timer that allows you to fall asleep listening to the radio but them turn off after a preset time that is adjustable from fifteen minutes up to two hours. There is even an auxiliary input that lets you plug in a CD player or even your iPod, so you can fall asleep to the music of your choice. Some minor features include dimmable LCD display that fully lights when the alarm goes off, an alarm indicator that lets you know the alarm is set and of course a snooze button. 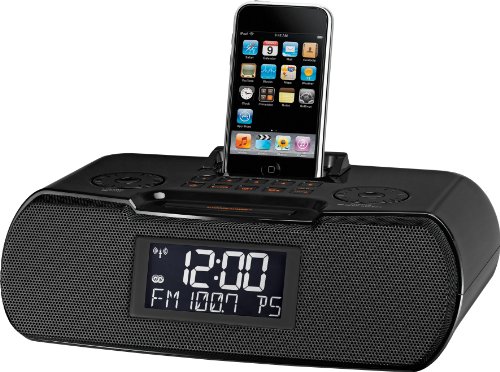 Next is the Sangean RCR-10 AM/FM-RDS Atomic Clock Radio with iPod Dock. This clock is

Credit: Amazon.comvery similar to the RCR-22 but is geared more for the iPod. It has the dual alarm that can be set to the HWS buzzer or the Am/FM radio/iPod. The radio on this model only has ten station presets five for AM five for PM. It has digital tuning; adjustable dimmer and an easy to read back lit LCD display. And it has the same capabilities as far as setting up to two alarms a day or for different days with a battery backup that keeps all your setting intact during power outages. The differences include an adjustable iPod dock that can play, charge and cradle your iPod. The docking station will move forward and backward to fit all iPods (except the 3rd generation) and even your iPhone. The RCR-10 has a bigger better sound for when you want to listen to music with it’s built in ported bass tube. It also has a fully functional remote control that will control both the radio and the iPod. Also there is an auxiliary jack for other MP3 or CD players, plus the full function IR remote that controls both the radio and the iPod. 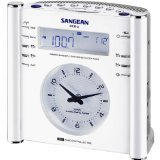 Credit: Amazon.comClock Radio. The basics are the same as the previous two models fourteen station presets, dimmable LCD display, time, date, multiple alarms, HWS, five minute snooze, auxiliary jack and so on but this one has a few extra features. For example one feature that makes this clock a little better than the rest is the HWS works in radio mode as well as buzzer mode. And if you was wondering what would happen if your radio station was coming in clear? Well, the RCR-3 will automatically switch to buzzer mode. How nice is that no more waking up to a staticy radio? Digital clocks are nice but you just can’t beat an analog clock so why not have both. And when the alarm goes off the light for the analog clock turns to a nice amber color. This clock also double the amount of alarms to four. It has good sound quality and picks up radio stations well.

So there you have it three of the best radio controlled alarm clocks you will find anywhere. With the amount of features and thought that has gone in to the design of these clocks you really have no need to look at any other clocks radios but feel free even though I know you will end up buying a Sangean.