So you had a fantastic meal at a restaurant and thought “I can make this at home for half the price!” You get a great recipe, buy all the ingredients, and get to work. Minutes or hours later, you sit down to dinner and taste nothing but failure. It might be a perfectly good meal, but it’s not the same. Sure, they may have professional chefs preparing food in the restaurant, but if you do everything the recipe says, it should come out the same, right?

Here are some tricks and tips to help improve your game at home, and get a more “professional” result when you cook at home.

Even if a recipe doesn’t specifically call for it, just about every single thing you make should be seasoned. If you’re making something like shepherd’s pie, which is a layered dish with meat, vegetables, and mashed potatoes, every layer in the pie needs to be salted. At a restaurant they throw salt all over the place, because they’re not worried about your blood pressure.

And because they’re not worried about your cholesterol, they use a lot of fat. Butter is spread around as liberally as the salt. Whole milk is used instead of skim, there isn’t any “diet” anything in their fridge. They know that the more fat in your food, the better you’ll like it.

It’s hard to cook everything just right. If you’re a line cook making the same five things every day, you know exactly when to take it off the heat. Also, if you cut your vegetables (or whatever you're cooking) and they aren’t all the same size, the bigger pieces will take longer to cook than the smaller pieces. Assuming you throw them all in at the same time, part of your food will be either under or over cooked, potentially both!

Even if you cook your spaghetti to the perfect degree of doneness, it will continue cooking after you pull it out of the boiling water and drain it. This is called carry over cooking, because hot food doesn’t miraculously stop being hot the moment you turn off the burner. If carry over heat is going to continue cooking your food, stop cooking just before you think it’s done. Let it sit for a few minutes, because you don’t want to burn your mouth anyway, and it will be perfect!

Unless you’re Martha Stewart reading this article for some reason, chances are you’re not starting to cook dinner three days in advance. But if you work in a restaurant with a regular menu, it’s easier to plan ahead than it is to make everything the same day. A restaurant has no problem taking that extra time to brine or marinate the meat, making a spice rub with freshly toasted spices, or spending an hour every day to clarify butter (which can be used to add more fat to your food).

There are ways around this when you’re cooking at home, but I’m sorry to say that it involves spending a lot more time in advance, and putting a lot more energy into one meal. The cooks in a kitchen make the same thing every day, but if you don’t want to eat the same thing every day it might not make sense to spend that sort of time. Especially when you could be reading articles online!

This is a tricky one. A standard commercial kitchen isn’t cooking with any magic that you don’t have access to in your home, but there are some things that a home kitchen just isn’t as likely to have. Stand mixers and food processors are expensive, and if you have one you’re a lucky person. Speaking personally, I don’t know what I’d do without my stand mixer and food processor, because without them everything is so much more work.

If you aren’t a passionate home cook you probably don’t have a crème brulee torch, a rotisserie, an immersion blender, or a deep fryer. And you don’t need them! Unless, of course, you want to make a crème brulee, a rotisserie chicken, a hot puréed soup, or fried chicken.*

Cooks are trained to plate food in order to make it look more appealing. It’s called “plating”, and it’s serious business. Fancy restaurants sometimes hire a person whose only job it is to arrange food on the plate before it goes to your table. If you’ve ever watched a cooking competition, you’ll see the chefs work very hard on their plating presentation.

When you’re cooking at home you probably don’t spend too much time worrying about how the food will look on the plate. It’s just you (or your beloved family, I suppose), and you want to eat the food, not make sculptures out of it. Well in this case, take some advice from five year olds and play with your food.

This is more of an art than a science, but there are some general rules: Don’t fill the entire plate. Leave some blank space around the food as if it’s the center of a bull’s-eye. Have one focus, and let everything else compliment it. Don’t just put spaghetti and sauce on the plate. Add a slice of buttered toast on the side, sprinkle some cheese on top, maybe use fresh chopped herbs for flavor and color. Have more than one color. It’s boring to eat an entire plate of beige. Maybe it’s a delicious plate of beige, but your eyes want more. Fruits, vegetables, sauces, or bread could all be used to make a plate more interesting. It’s not much more work, but it makes a big difference.

Finally, if you eat in front of the computer or sit in front of the TV with the plate on your lap, you are avidly distracting yourself from your meal. In a restaurant you’re sitting at a table, and it’s probably got a table cloth, nice silverware, a flower in a vase, or maybe a candle. You’re focusing more on the food, and as a result you taste more.

If you just spent the time to cook a delicious meal, you should spend the time to eat it, too.

*Note: Everything I just said is a lie. You could actually make all of those things without their specialty tools. It’s just a lot more difficult, time consuming, and risky. 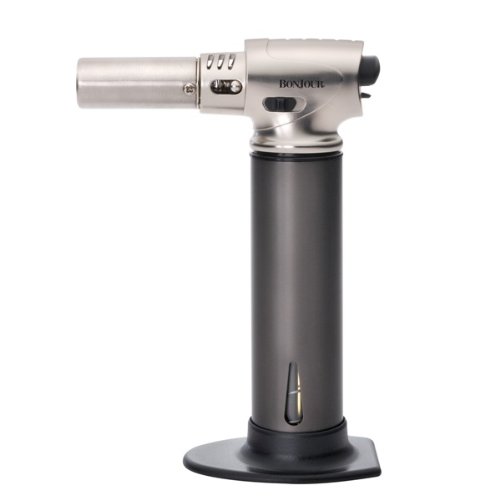 BonJour CrÃ¨me BrÃ»lÃ©e Chef's Professional Culinary Torch with Fuel Gauge Amazon Price: $39.99 $24.99 Buy Now(price as of Nov 7, 2014)
If I could, I'd eat nothing but creme brulee. Creme brulee all the time. Most recipes say you can caramelize the sugar crust under your broiler, but if you want a cold custard and a hard crust, you need the torch.
Next >> 6 Make-Ahead Lunches That Aren't Pretentious Health Food