“Everything in life is writable about if you have the outgoing guts to do it, and the imagination to improvise. The worst enemy to creativity is self-doubt.” â€• Sylvia Plath, The Unabridged Journals of Sylvia Plath Be fearless. Start writing today for Infobarrel and make $$$ while you're at it.
InfoBarrel is a writing platform for non-fiction, reference-based, informative content. Opinions expressed by InfoBarrel writers are their own.
InfoBarrel > Entertainment > Film > Movies

Top Five Most Heartbreaking Movies of All Time

Did you ever watch a movie, just to feel gut-wrenched at the end? Years later, you watch the same movie again, and this time, you feel even worse for the characters. Whether it’s a love lost, or two souls that can never be together, the characters feel so real and relatable that you just want them to get together at all costs. Of course, sometimes life gets in the way and you don’t always get want you want.

Some of the movies below are adapted from novels. However, this list is based upon the movie adaptation and not the original novel. Here are the top five most heartbreaking movies (spoilers ahead):

Memorable line: Come what may, I will love you until the end of time.

Whenever I watch this movie, I can never watch it to the end. I just watch it up to the point that curtain falls and the cast receives thunderous applause. I like to think that Satine and Christian reunited their love and lived happily ever after, away from the Duke. Of course, that’s not what happened. What makes this story so heartbreaking is that after all the obstacles they’ve been through, Satine finally realizes it is better to speak the truth and express her love for Christian at all costs. At their happiest moment just when they’ve reignited their love, Satine dies of consumption.

4. Phantom of the Opera

Memorable line: Beautiful creature of darkness, what kind of life have you known? God give me courage to show you, you are not alone.

Here is a lonely phantom who has spent his entire life cast out of society and ridiculed. Sure, he was a little crazy, but who wouldn’t be if they were in his position? He put his heart and soul into training his pupil Christine, the one person who isn’t afraid of him. Alas, it turns out she’s in love with the handsome, rich Raoul. Near the end, she’s ready to give up her life to be with the Phantom to save Raoul, but it’s too much for the Phantom to bear. He has never been loved and lets her go, to live the rest of his life in solitude.

Memorable line: Life has killed the dream I dreamed.

There were a couple storylines here that were tear jerkers. For one, Fatine lived such an incredibly difficult life. She toiled away, just to scrape some money to support her daughter, but then gets tossed out into the streets because of her daughter out of wedlock. And then, having to sell her hair and teeth to make some money! This poor woman was clearly done many injustices. The worst part was when she sang “I Dreamed a Dream”. Here, we learn about her youthful optimism years earlier, falling in love with a rich young man and spending a glorious summer. Of course, life takes a sudden turn when she is left alone to fend for herself and her daughter that she must keep a secret. Her line “life has killed the dream I dreamed” resonates strongly with everyday folk as we age and realizes our youthful ideals and dreams don’t always happen, and that life is hard.

Second Memorable line: A little fall of rain, can hardly hurt me now.

Everyone was cheering for Team Eponine on this one. Eponine’s strong, courageous and selfless. Cosette, on the other hand, is sheltered and innocent. Eponine represents what our society idealizes: an independent and intelligent girl who can take care of herself. Although, maybe people back a couple hundred years ago would have much preferred Cosette, since she was a closer fit to the female ideal back then. Still, Eponine’s efforts to help Marius find Cosette show how much she cares for him. Meanwhile, Cosette is sitting at home, passively waiting around! It all culminates in Eponine putting herself in the line of fire to save Marius’s life, and their sad, tragic duet before Eponine slips away.

Memorable line: Let’s never come here again because it would never be as much fun.

A man and woman meet in a foreign place far from home and form an unlikely bond: one, young and beautiful, even if a little cynical, and another, middle-aged and battered by life, yet still showing sparks of youthful energy. The Tokyo backdrop heightens the sense of wonderment and isolation at the same time. Nothing happens physically, but they spend their time talking about life, feelings and exploring Japan. The whole atmosphere is transient and magical, since both of them know that if they return to visit the same places and haunts again, things will never be the same. They must return back to their original lives and marriages.

Memorable line: There’s a story, a legend, about a bird that sings just once in its life. From the moment it leaves its nest, it searches for a thorn tree, and never rests until it’s found one. And it sings…more sweetly than any other creature on the face of the earth. And singing, it impales itself on the longest, sharpest thorn. But, as it dies, it rises above its own agony, to outsing the lark and the nightingale. The thorn bird pays its life for just one song, but the whole world stills to listen, and God in his heaven smiles.”

Okay, so this isn’t a movie, it’s a TV mini series. Nevertheless, if you haven’t seen this TV mini-series, go out and get it! It is an absolute must see for those who enjoy watching drama and romance. I’ve thought about the quote and what it means, and I take it to mean that the characters Ralph and Meggie share a great love, that is both beautiful and tragic. The aggravating thing about their lifelong romance is that the obstacles are caused primarily by Ralph’s ambitions rather than any external forces. Meggie spends her life pining for Ralph, while Ralph tries to forget and chase his own dreams. 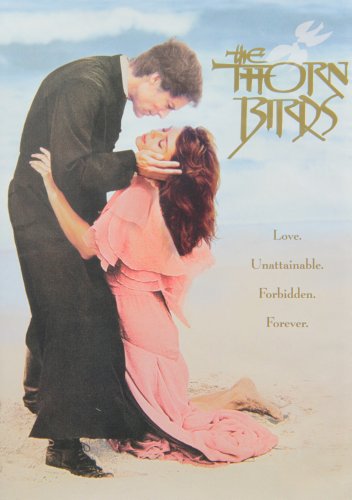 The Thorn Birds Amazon Price: $21.33 Buy Now(price as of May 4, 2016)
A beautiful and timeless masterpiece.
Next >> Movie Review: The Girl on the Train