Top Rated Alarm Clocks for the Deaf and Hard of Hearing

Chances are if you are deaf or hard of hearing you have struggles with finding a reliable way to wake up each morning. The importance of this simple act can affect every aspect of our lives. It simply isn’t acceptable by most standards to be late to work, school, appointments or any number of other daily activities. Being habitually late gives others the impression that you are unreliable even though it is no fault of your own. In the not so distant past individuals in this situation had to count on the assistance of others to wake them or rely on inferior alarm clocks or other products. But times have changed and there are many options for those with special needs. If you or someone you know is having problems waking up because of a hearing impairment the following alarm clocks for the deaf and hard of hearing may be the answer.

Alarm Clocks for the Hearing Impaired Worth Buying

Probably the most popular of all alarm clocks designed for the hearing impaired or for those that are simply heavy sleepers is the Sonic Boom line of Alarm Clocks. Simply put, if this alarm clock doesn’t wake you then nothing will. One of the best selling models in the Sonic Boom line is the SB200ss. It comes with a loud 113db audible alarm that has a volume control and an adjustable tone for those that can only hear in certain ranges. To give some idea of how loud this alarm is the adjustable dial goes from one to ten and three is about as loud as a typical alarm clock. It is also equipped with the “Super Bed Shaker” a vibrating disc that can be placed between the mattress and the box spring. When the alarm is set you can choose between three options the audible alarm, the vibrating disc or for those that really have a hard time getting up you can use both. The Sonic Boom alarm clocks come with an 110v power supply but have a switch so it can also be powered by a 220v which is very handy for those that travel from the US to Europe. There is also a plug in for a nine volt battery backup which will allow the clock to store your time and settings but it will not power the alarm. Other features include being able to choose between 12 or 24 hour time, a one inch easy to read lighted display with a high/low dimmer switch and a snooze button that goes off again after nine minutes. Some of the other Sonic Boom models that are available include the Sonic Bomb, the Sonic Boom Analog, the heart shaped Sonic Boom Sweetheart Alarm Clock and the Sonic Alert the Skull with Bone Crusher.

Another clock you will want to take a look at before you buy is the Shake Awake vibrating Portable Travel Clock. This travel alarm clock is a good choice for anyone that has troubles getting up including those with hearing problems. Like the Sonic Boom it can be set to sound an alarm or to vibrate. But unlike the Sonic boom it doesn’t have a separate piece that vibrates instead it is built into the clock itself. It comes with a strong clip attached by a string that allows you to clip it in a location that will wake you like your pillow or sleeping clothes. Some people even wrap the clip string around the ankle or wrist. You can also just slide it into your pillow case. It also has a snooze button and for those worried about turning of the alarm on accident it also has a covered off switch. 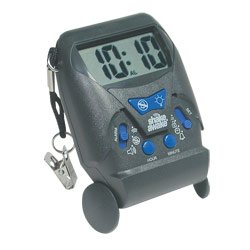 Finding an alarm that does the job is very important and having one that you can count on no matter how impaired your hearing is a great feeling. So do yourself a favor and try out one of these dependable time pieces and maybe you will never have to worry about being late again.