The Top 10 Most Valuable Hockey Cards

Hockey is one of the most popular sports in the US. It’s also popular in Europe, particularly Scandinavia. The sports cards trading market probably isn’t as profitable as it was in the past, but vintage hockey cards at the top end of the market have certainly held their value and are a good investment, as well as lovely items to have in your home collection. Star player trading-cards, and particularly their rookie cards, are really collectible and really valuable.

Let’s take a look at the ten most costly hockey cards based on both popularity and the amount they would costs to purchase.

Guy LaFleur is a hall of famer and a Canadian legend. In 1971, his rookie trading-card was released and is now worth around $12,000 if in near perfect condition. Lower condition cards would obviously attract a far lower cost. 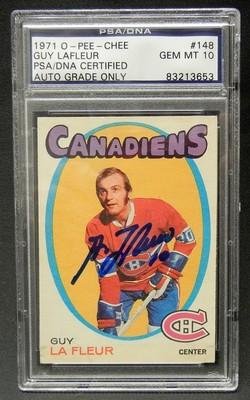 At no. 9 we have Jacques Plante

The Jacque Plante 1955 Quaker Oats trading-card again is worth around $12,000. These are very rare and difficult to find in the market place. They were actually distributed through boxes of cereal and were therefore often damaged in transit or early on in their lives. Therefore if you can find one in good condition you’ll be on to a fortune.

At no. 8 we have Jack Georges Vezina

The Georges Vezina imperial tobacco cards from 1911 were distributed, as you might expect, with tobacco. The tobacco industry used to give away collectable cards to increase brand loyalty. This card is valued at around $13,000. Georges Vezina is actually the person that the most outstanding goaltender annual NHL award trophy is named after—the Vezina Trophy.

At No. 7 We have Bobby Hull

The Bobby Hull 1958 Topps trading-card is one of the most expensive trading-cards of all time. The top grade cards are valued at around $13,000. This is his version for the Chicago Blackhawks in the year 1958.

At No. 6 We have Gordie Howe

The 1954 Topps Gordie Howe trading-card again retails at over $13,000 when found in tip top condition. This was not his rookie trading-card, which actually came on to the market a few years earlier than this card, but it no doubt is an extremely value playing-card ; but not quite making the top five.

At No. 5 We have Mario Lemieux

The Mario Lemieux 1985 Topps card costs over $14,000 when found in high grade or mint condition. Mario Lemieux is certainly one of the best players ever to enter the ice with a hockey stick. He was able to do things that very few other players have ever been able to achieve. He did so with consummate ease, highlighting his natural ability.

At No. 4 We have Maurice Richard

Gordie Howe Again at No. 3

Gordie Howe’s rookie collector-card from 1951 is a little smaller in terms of size than the majority of cards on the market. It is extremely rare and not often found on the open market. It’s even harder to find it in decent condition. If you get one of these in high grade it’ll be worth over $15,000.

The 1966 Topps Bobby Orr card is worth well over $40,000 if found in high grade. It is extremely rare as you would expect. This is his rookie card.

At No. 1 We have Wayne Gretzky

The Wayne Gretzky 1979 O-Pee-Chee card fetches well over $50,000 when found in high grade. Wayne Gretzky is perhaps the best hockey player ever, although others are obviously thrown into the mix when this coveted title is discussed. Generally this card is the most valuable card on the market and will cost a small fortune to purchase if you are lucky enough to ever find one.

You can find hockey cards on niche collector sites and of course on eBay. Ensure you get a professional grading of cards before you make a significant purchase as the value is intrinsically linked to the verified condition of the card. The best cards look set to continue to increase in value over the coming years so you will be buying a great investment as well as a piece f history when you shell out for a top hockey collector-card.

So there you have it, a look at the ten most valuable hockey cards ever. It’s amazing that a piece of card can costs $50,000 or more; but then that is the desirability of the cards representing the top players in this great sport.