I love writing for InfoBarrel and write on a variety of topics. You can see my recent articles here.Â http://www.infobarrel.com/Users/andrewagreen If you would like to make extra money writing sign up for InfoBarrel hereÂ  Â
InfoBarrel is a writing platform for non-fiction, reference-based, informative content. Opinions expressed by InfoBarrel writers are their own.
InfoBarrel > Sports > Soccer

It can be the shirt of your idols that you eat, drink and sleep in, the shirt of your bitter rivals you wouldn't be seen dead in or the shirt of opponents you have a grudging respect for; but so many of our memories and feelings about the game of football are bound up in that essential piece of kit, the soccer shirt. Here is my  selection of the top ten football shirts.  It's a personal selection  yours will be different. 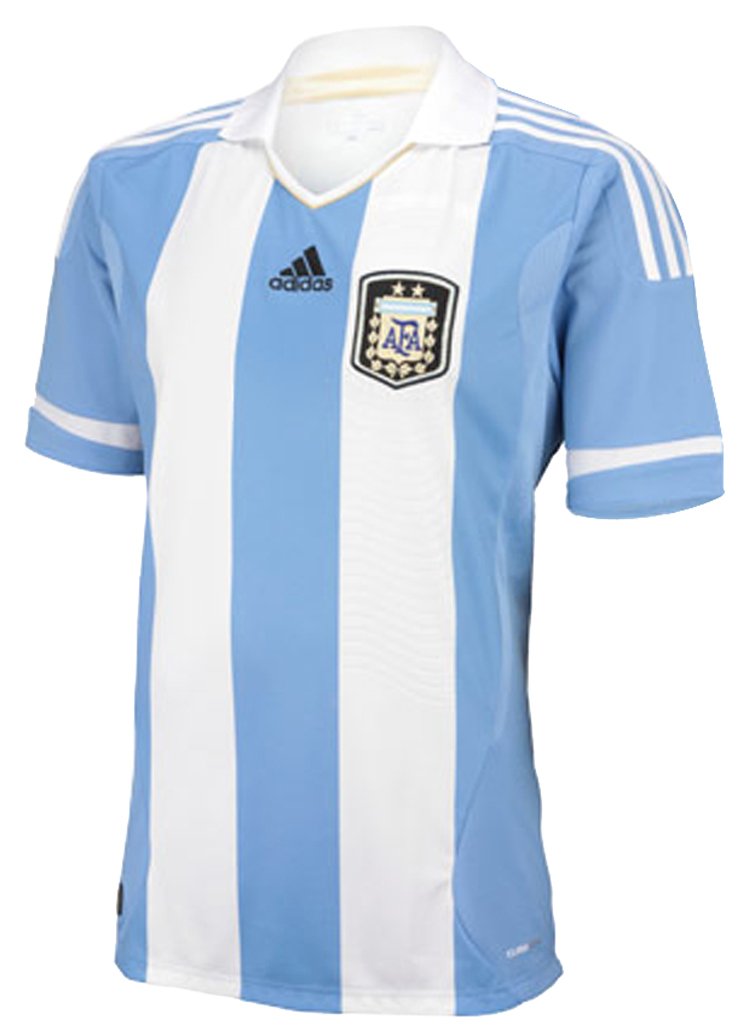 English fans have never forgiven Argentina for Diego Maradona and the 'hand of God' incident in the 1986 World Cup, where he scored a goal with his hand, but we have a grudging respect for the player who in the same game dribbled past six England players  to score one of the best World Cup Goals ever.  Our earlier memories are of the 1966 World Cup, Rattin getting sent off and England manager Alf Ramsey (before he got the Sir in front of his name) calling the Argentinians 'animals'. Now it's the international shirt of Lionel Messi undoubtedly the best player currently pulling on a football shirt. We have little love for the Argentinian soccer shirt but a lot of respect.

England is still celebrating victory over West Germany in the 1966 World Cup. We have had 46 years of hurt, without a trophy, since then while the ruthlessly efficient Germans always get it right for the major tournaments. Germany have won two more World Cups since then (three in all) and three Euro championships and they always seem to eliminate the English on penalties. Our best memories are bound up with beating the men in the white shirts. Unfortunately it doesn't happen very often. We are still pinching ourselves over England's 5-1 Munich victory in 2001 but the memories evoked by a German football shirt are mostly unhappy ones.

The proper England football shirt is white but the red change shirt reminds us of that special day at Wembley when, with the help of a Russian linesman, we beat the Germans and lifted the World Cup for the only time in our history. Englishmen wear the shirt and the three lions on its badge with pride. Every England win is celebrated as the dawn of a new era and every defeat as a national tragedy. We invented the game and can't understand why we can't always win everything. Who would want to be an England Manager? ........... Serious question we are short of one at the moment. Applicants of any nationality welcome (though an Englishman would make a change) - just need to be good at collecting silverware.

The Gunners reputation as one of the English Premier League's Big Four has looked shaky of late. They play very pretty football but to no great effect. Arsene Wenger has done a terrific job at Arsenal but if Arsenal don't pick up a trophy soon, or if the power shifts to their North London neighbours Tottenham, the Frenchman's days will be numbered. I can't leave Arsenal off the list though; the distinctive soccer shirt, the distinguished record: 13 Premiership or old first division titles, 10 times F.A. Cup winners, three times double winners. Sadly European success has eluded them; no champions league victories and their single Cup Winners Cup victory in 1993-4 was a long time ago. 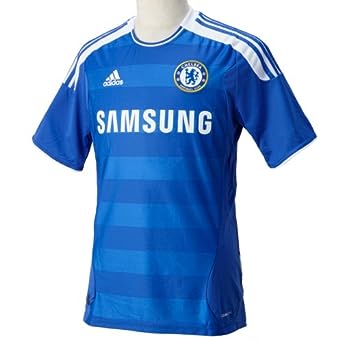 Chelsea have done better than Arsenal in recent seasons but Roman Abramovich's Russian millions have not bought the level of success he craved and seven managers in nine seasons have paid with their jobs. Still three premier league titles, three  runners-up spots, their first Cup and League double in 2010 and regular Champions League football would count as success for most teams and gets Chelsea on the list. Plenty of teams play in blue but the all blue football kit is distinctively Chelsea. You think blue and you think  Chelsea. "So into the blue corner goes Chelsea's soccer shirt.

Liverpool would be on here if it was only for their five Champions League wins and eighteen top flight titles and seven FA Cup wins. They have slipped out of the top four of late and are missing the big European nights that were such a feature of Anfield. They would be on here for the all red football kit, the legendary Kop, the evocative "You'll never walk alone" anthem and the inimitable Bill Shankley. "Football's not a matter of life or death. It's more important than that." But there are tragic memories of Liverpool too; the Hillsborough tragedy and the Heyschel Stadium disaster. The passion of Liverpool's fans for their famous red soccer shirt runs deep and is very emotional. 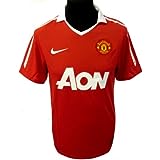 Manchester United is a huge commercial operation. Their shirts sell all over the world, about £1.5million per year. The red football shirt of Man Utd. is Nike's biggest seller. For my generation the United shirt evokes memories of the Munich air crash (I was very young but it helped to make the legend) a team destroyed, re-built by Sir Matt Busby then victorious that famous night at Wembley. George Best dominated  the world stage as he was meant to and Bobby Charlton and Matt Busby, both subsequently knighted for their efforts, were in tears. The modern United under another Scot Alex Ferguson have seen even more success. Two more European victories, including a stunning injury time victory against Bayern Munich are just the icing on the cake. Sir Alex, the Premier Leagues longest-serving manager has won 37 major honours since joining the club in 1986. United have won more titles, 19 than any other club and have 11 FA Cup victories behind them. It's a football shirt fans over the world want to be seen in but fans of other clubs deride United supporters as 'glory hunters' and not proper fans. They question how many of United's so-called supporters ever set foot in Old Trafford.  United's 75,000 average attendance suggests a good number are going through the turnstiles but the jibes about Cockney Reds and more United supporters coming from London than Manchester still fly. The red shirt of United evokes pride, loyalty and dislike in equal measure. 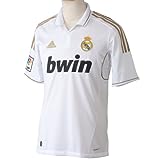 Real Madrid are a top drawer side and their white soccer shirt and all white soccer kit are manufacturer Adidas' biggest sellers. But the white of Real Madrid evokes a golden age of football too when the likes of Di Stefano graced the Sante Bernabeu stadium. Real's record of nine European Championship titles includes a run of five consecutive wins between 1956 and 1960. They will forever be associated with the Manchester United of that era. Today they are famous for the Galacticos, stars drawn from across the world. Former Man Utd. favourite Ronaldo is currently playing at the Sante Bernabeu. The average crowd in Madrid is 76,234 the highest in European football. 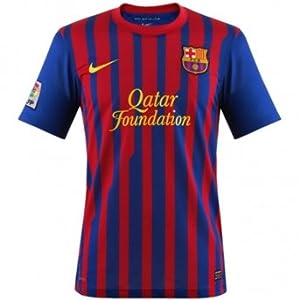 Barcelona are the team of the moment, Europe's finest. Fierce rivals to Real Madrid darlings of Catalonia. Second only to Real in terms of wealth, Barca are more than a football club they are a symbol of Catalan culture and passion. Barca are the current European and Spanish champions. They have won four European Championships in all, twenty-one La Liga title and 25 Copa Del Rey. They swept Manchester United aside the last time the teams played and are head and shoulders above any other team in Europe. Their star Lionel Messi recently became the first man to score five goals in a Champions League game and is surely the best player in the World at the moment. There are few football fans, whatever their allegiance (unless they are Real fans of course!!) who wouldnt be proud to pull Barca's red and blue soccer shirt over their heads. 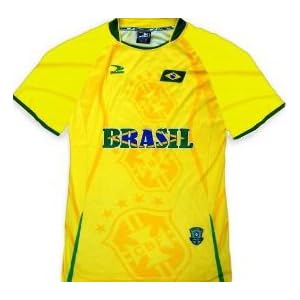 Finally, the Yellow and Green soccer shirt of Brazil and the blue shorts  make up the football kit that evokes everything that is beautiful about the beautiful game. The Brazilians with their samba rhythm and their silky ball skills and mesmerizing ability to bend the ball around a wall play the game the way it was meant to be played.  The yellow and green Brazilian football shirt is the shirt of Pele, Garrincha, of Ronaldo (not Real's the other one!) and of Rivelino. The Brazilian soccer shirt above them all is the shirt that evokes the spirit of football.

So that's it, a very personal selection of the world's most evocative football shirts. I'm conscious of some I've left off the list. Leave some comments and let me know your pick. Sign up for InfoBarrel (you'll find the link in my signature frame) get a platform for your views and maybe make some money.

All the pictures in this article are taken from Amazon. The football shirts shown are available through Amazon. They have a big selection and their prices are very competitive. Go for the shirt you love and that makes you proud or the one that will make someone else's day. 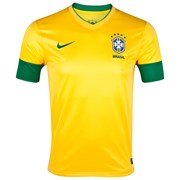