InfoBarrel is a writing platform for non-fiction, reference-based, informative content. Opinions expressed by InfoBarrel writers are their own.
InfoBarrel > Travel & Places > Places > Ethiopia

Top Things to Do in Addis Ababa

Ethiopia's tourism industry, centred mainly around the historic sites of the north and the colourful Omo Valley in the south, is still largely underdeveloped.  Addis Ababa, the country's bustling capital, is not traditionally a top tourist destination, though many visitors to East Africa will travel through the city. Those who choose to stop and sample Addis Ababa's delights will be pleasantly surprised.

Addis Ababa's Mercato is the largest market in Africa. A sprawling grid of streets is lined by kiosks, stalls and small shops selling a broad range of wares, including CDs and DVDs, fruit and vegetables, spices, kitchenware, silver jewellery, traditional clothing and crosses, and khat.  The 200-plus vendors also include weavers, potters, blacksmiths and carpenters. Price can generally be negotiated. Despite it's charm, the Mercato is a very busy area, and pickpockets are plentiful. Do not take any valuables on your visit, and if possible take a local guide with you.

If you want to shop for souvenirs and traditional clothing, Shiromeda Market is a more suitable option.  This market lines the street at the foot of the mountain and is considerably quieter and somewhat safer than the Mercato.  More upmarket shopping options are located around Piazza, and in the Bole area, close to the airport.

Mount Entoto, in the Entoto Hills overlooking the city, is of particular spiritual significance to the Ethiopian people.  It was briefly the site of Menelik's captial, and the Entoto Maryam Church, which still stands, is where Menelik was crowned Emperor in 1882.  The church can be viewed during and immediately after daily services.  The Entoto Saint Mary, Emperor Menelik and Empress Taitu Memorial Museum, located next to the church, is well worth the small entry fee.

The journey to Entoto involves steep rises and hair-raising hairpin bends, but is well worth the effort.  The views of the city are spectacular, and the sunsets to the west of Addis Ababa are incredibly beautiful. This is a great place to get away from the hustle and bustle of the city and to take the enormity of it all in.

Ethiopia is known across the world for the success of its distance runners, and many of the country's greatest champions, including Haile Gebrselassie and Kenenisa Bekele own properties and operate businesses across the city.  Haile and Kenenisa hail from the Oromo region south of the city, but reached international stardom while using the capital as their training base. Most of the athletes' training is done at high altitude in the Entoto Hills above the city, or at the athletics stadium close to Meskel Square.

International athletes looking to take advantage of the area's high altitude often avoid the city's pollution and stay at Yaya Village in Sululta, just north of Addis. Less serious runners, who choose to stay in the city can also sample the East African running culture.  Every morning, hundreds of Ethiopians, run along the tiered levels of Meskel Square, and this a great place to get some exercise.  The Great Ethiopian Run, Africa's biggest road race, is held in the city every November, and it attracts recreational runners from many countries. The sight of  30,000 runners, joggers and walkers making their way through the streets of the capital, all wearing identical, colourful teeshirts, is one to behold.

Treat yourself to coffee and cake

Ethiopia is famous for its coffee, and there are plenty of places around the city to sample the country's greatest export.  Many of the cafes also serve delicious cakes and biscuits, layered fruit juice, and other delightful treats.  If you're just interested in the coffee, try out Tomoca, a small coffee shop located just off Churchill Avenue.  There are no seats in this establishment; you simple enjoy your brew standing. They also sell coffee beans.  Some of the coffee processing plants south of the city offer tours of their facilities and coffee tasting sessions.

The coffee ceremony is an important Ethiopian tradition. Being invited to a ceremony is a show of friendship, and turning down the opportunity would be considered rude. Fresh coffee is carefully prepared in traditional pots and served with popcorn. The ceremony can take hours; this is far from instant coffee.

Learn about the history and culture of Ethiopia

This small museums in the city are a great starting place for learning about the history of Addis Ababa and Ethiopia.  Museum prices are low, even taking the higher rate for foreign visitors, and even those who normally don't like museums will be intrigued by the country's colourful past.

The Red Terror Marytrs Memorial Museum is the best of Addis Ababa's museums.  This small museum, located off Meskel Square, is a tribute to those who were massacred during the Derg era. The displays, mostly photos, give a harrowing insight into the darkest years in Ethiopia's history.

The other museums worth visiting are dingy by comparison, but still provide an important insite into Ethiopian culture and history. The National Museum of Ethiopia houses the skeletal remains of Lucy (Dinknesh), one of the oldest humanoids ever discovered. The Ethnological Museum is located in the former palace of Emperor Haile Selassie on the university campus.  Here, much of the former emperor's living quarters remain untouched.

Other things to do

Other sites and places of interest include the lavishly decorated Holy Trinity Cathedral (Kiddist Selassie), the charming Itegue Taitu Hotel, and the magnificent Bole Medhanialem Cathedral. Simply taking a bus through the streets is a great way to gain an insight into city life.  You'll get to see the poverty and hope of the local people, and there is no better way to capture the colour and character of the Ethiopian people.  And don't forget to try injera, the local speciality food. 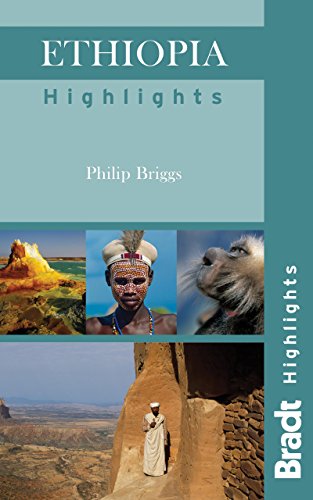 Ethiopia Highlights (Bradt Travel Guide Ethiopia Highlights) Amazon Price: $24.99 $8.32 Buy Now(price as of Apr 1, 2015)
Travel guides for Ethiopia are few and far between; this is by far the best on offer.
Next >> A Punishing Hike to Mt. Ypsilon in Rocky Mountain National Park