Hello! I am a Irish athlete with a broad range of interests. I enjoy running, travelling, writing and photography, and in 2013 I combined my biggest passions and published my first book. The book, Notes from Higher Grounds (Kukimbia Huru Publishing), is a travel guide for endurance athletes looking to train at altitude. I have a BSc in Sports Science and a PhD in Exercise Physiology, and have spent the last 10 years helping high performance athletes achieve their potential.  My book can be purchased via Altitude Training Camps.
InfoBarrel is a writing platform for non-fiction, reference-based, informative content. Opinions expressed by InfoBarrel writers are their own.
InfoBarrel > Sports

The high jump is the track and field event that has evolved the most since its introduction onto the Olympic Programme in 1896. The addition of a landing mat in the 1960s enabled a basic scissors-kick jumping technique to evolve into a highly technical backward clearance of the bar. Dick Fosbury, the man who dared to think that a back-first clearance technique might be possible, will forever be one of the best known figures in track and field athletics.

The current world records for both men and women are among the oldest in athletics. The men's record of 2.45 metres has been held by Javier Sotomayor since 1993, while Stefka Kostadinova set the women's record of 2.09 metres way back in 1987.  Charles Austin (2.39m) and Yelena Slesarenko (2.06m) hold the Olympic records.

Rules of the event and determining the winner

The aim of the high jump is to clear as great a height as possible. To facilitate measurement of the height cleared, a 4-metre long horizontal bar, loosely mounted on two vertical uprights, must be cleared at a series of incremental heights until a winner is determined. The only limitation to how the bar is cleared is that the athlete must take off from one foot. Nowadays all world class athletes do so by utilising the Fosbury technique.

Athletes have three opportunities to clear each height.  Failures occur when the bar is dislodged by the jumper during the jumping action, or when the jumper breaks the plane of the near edge of the bar before clearance. An athlete is eliminated after three consecutive failures, irrespective of the height. In other words, after one failure at a particular height the athlete may choose to 'pass' remaining attempts at that height and move the bar up to the next height, where they will only have two attempts.

Athletes can choose which height they enter the competition at and whether they wish to pass any heights along the way. In the event of a tie, the number of failures at the previous height will be taken into consideration, and then the total number of failures during the competition will be considered.  In the event that a winner cannot be decided based on count-back, the relevant athletes will engage in a jump-off. If a winner still can't be decided, those athletes get another jump at the failed height. If all athletes clear that height, the bar is increased by 2 cm, and if they all fail, the bar is lowered by 2cm, and so on until the winner can be determined. Jump-offs do not take place to separate athletes in second or third position, and there is often more than three athletes on a high jump winner's rostrum.

Scissors jumping at its very best!

According to records, high jumping was first held in Scotland in the 1800s, and it was included in the first modern Olympic Games in 1896.

The Eastern Cut-off, the Western Roll and the Straddle techniques were methods used by the world's best high jumpers before foam landing beds were introduced in the early 1960s. Dick Fosbury was the first to go over the bar leading with his back, and the technique he used to famously win the 1968 Olympic title in Mexico City is now the pre-eminent technique used at all levels of high jumping.

In 1956 and 1957 many of the top jumpers used built-up shoes with soles of up to 5cm in thickness to increase the hight cleared. Such footwear was quickly banned by the IAAF.

Russia has provided the last four female Olympic champions and the last two men's Olympic Champions as well has a host of other top jumpers. Though Sotomayor and Kostadinova's world records have stood for some time, numerous valid attempts have been made to break both records in recent years. The charismatic Croatian Blanka VlašiÄ‡, a two times world champion, has come within one centimetre of the record, while the intense rivilary between Mutaz Essa Barshim (Qatar), who has a best of 2.43, and Bohdan Bondarenko (Ukraine), with a best of 2.41, ensures that the men's mark is constantly under threat.

Other notable characters include Sweden's Stefan Holm, who at just 1.81 m shares the unofficial record of 59 cm for height cleared above own height. 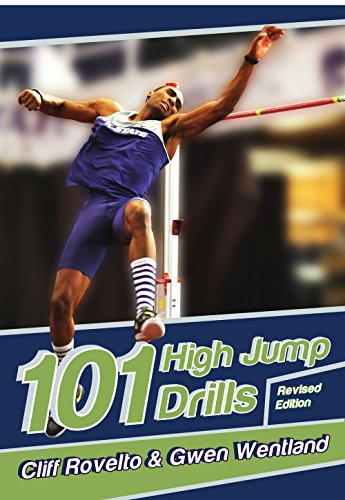