InfoBarrel is a writing platform for non-fiction, reference-based, informative content. Opinions expressed by InfoBarrel writers are their own.
InfoBarrel > Sports > Olympics

Track and Field Know-How: The Steeplechase

The 3000m steeplechase is one of the most exciting and physically demanding events on the Olympic track and field programme. It combines technical skill with endurance prowess as athletes race over 28 standard fixed barriers and seven waterjumps.  The exact number of laps depends on the location of the waterjump, with just over seven and a half laps covered if, as is normal, the waterjump is on the inside of the track. When the waterjump is on the outside of the track, the startline is brought forward accordingly.  The barrier height for men is 36 inches (91.4cm), while women compete over 30 inch (76.2cm) barriers.

The waterjump is considered by many to be the most difficult aspect of the event to master. The landing area is at it's deepest at the barrier end (70cm) of the 12 ft (3.66m) pit.  Athletes must balance clearing enough water so as not to slow their progress, but to not expend unnecessary energy. The standard technique is to place one foot on the waterjump barrier, though many athletes - particularly the Kenyans - choose to clear the barrier.

History of the event

Steeplechase, an event normally associated with horse racing, originated in Britain, where individuals would race to a distant steeple, in the next town for example, and cross obstacles such as low walls and streams along the way.  The current track and field appears to have evolved from two-mile cross country runs held at Oxford University in the mid 1800s.  The steeplechase was upgraded to a track event with barriers, and added to the English Championships in 1879.

The steeplechase was first added to the Olympic programme in 1900, though initially it was held over distances of between 2500m and 4000m, and men have contested the event at every Olympic Games since.

Women's steeplechase is the newest event on the track and field programme.  It first made it onto the Olympic programme at the 2008 Games in Beijing, after first featuring at a World Championships three years earlier.

Kenya is by far the most dominant nation in the men's event.  They have won the last eight Olympic titles, and have completed clean sweeps in the event in 1992 and 2004.  Moses Kiptanui is considered by many to be the 'daddy' of modern steeplechasing. He dominated the event between 1991 and 1995, won three consecutive world titles (1991, 1993 and 1995) and broke the then World record, but never won the Olympic title.

Said Saaeed Shaheen of Qatar, but born Stephen Cherono of Kenya, is the current men's world record holder with 5:53.63. Kenyans Brimin Kiprop Kipruto (7,53.64) and Paul Kipsiel Koech (7:54.31) are the next best on the all time list.

Despite Kipruto and Koech's fast times, it is another Kenyan, Ezekiel Kemboi, who has dominated championship racing in recent years.  After finishing runner up at the 2003, 2005 and 2007 World Championships, Kemboi won the next three editions, taking the title in Berlin, Degau and Moscow. Kemboi added Olympic titles in 2004 and 2012 as well as the Commonwealth title in 2006.

Gulnara Galkina of Russia is the current women's record holder with a time of 8:58.81. Russians also currently fill the second and third spot on the world all time list.

All participants start on a curved line, and, as with other track events longer than 800m, they are free to break for the inside immediately. Though barriers only extend across the inside three lanes of the track, athletes must go over all barriers and waterjumps. Athlete must also adhere to other rules of running applicable to races longer than 800m, and must not imped or obstruct the progress of fellow competitors. 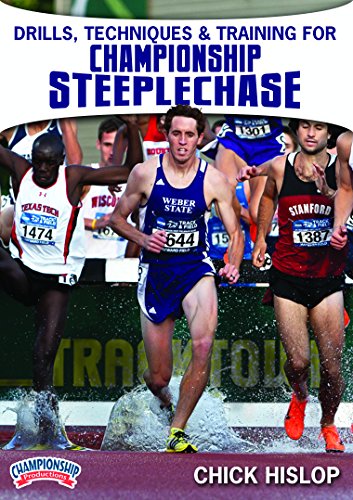