Who says domestic cats can't learn?Sure tricks can be taught, but more importantly, cats need to learn some practical safety behavior when living with their humans.Cats as with most animals learn especially well with behavior modification techniques.This has been well established by Pavlov's operant conditioning experiments.How does that transpire to the average person trying to get kitty to behave in more desirable manners?

It takes patience and consistency, but it can be done.As with most animals, cats learn by repetition and association.The most beneficial way to train a cat is to reward for desired behavior and make undesired behavior unpleasant for them.This does not advocate uses cruel or abusive punishment for undesired behaviors.In fact, doing so will result in the cat learning something entirely different than what is most likely intended-fear.Fear can cause the animal to withdraw, cower, or become aggressive.

Rewards do not have to be food or treats.Domestic cats can respond to praise and attention.When owners have the respect of their pets; the pets most often want to please their owners.Giving kitty a scratch behind the ears or a gentle tummy rub may be all she needs.They recognize tones so praising them will be rewarding. 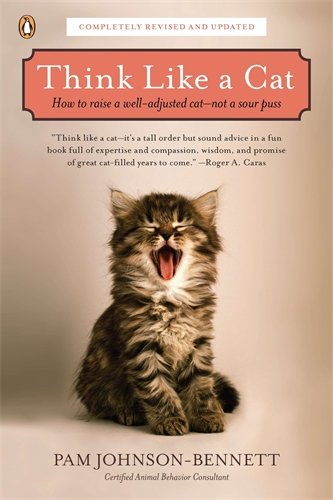 Think Like a Cat: How to Raise a Well-Adjusted Cat--Not a Sour Puss Amazon Price: $18.00 $8.95 Buy Now(price as of Sep 26, 2015)
Written by a certified cat behavior consultant, this book is all you need to raise a well-adjusted feline. This book includes tips on how to train a cat and addresses many cat owner concerns.

Training a Cat by Making the Undesired Behavior Unpleasant

Making the undesired behavior unpleasant for cats can be as simple as making a loud noise; spraying them with water, or believe it or not; grounding them.  In working with a cat who loved to jump on the second story balcony ledge; he was taught by his owner to stop jumping on the ledge by being grounded from the balcony.  Don’t scoff.  This method worked.  Here’s how the owner trained her cat Wildthing, who was about four years old at the time, to stay off the balcony ledge.

Wildthing was an inside cat.  When the owner cleaned the litter box, he was allowed to go out

This example shows how consistent, repetitive techniques and making the undesired behavior unpleasant can teach a cat a desired behavior.  Will this work with every cat?  Perhaps not; again, the cat must respect its owner and have a pleasant experience to compensate for the “removed” undesired behavior. (This is why rewarding with treats is a good idea)

Other training methods available to try include the “clicker” method.   This method too, is based on Pavlov’s operant conditioning and was developed and popularized by Karen Pryor.  She claims this method works for most animals; including rabbits and canaries.

The two main reasons cats are surrendered to shelters is due to undesired behaviors of litter box avoidance and scratching issues.  Learning to train a cat properly can result in alleviating these problems.  Cats can be trained—of course any cat owner knows cats have to think it’s their idea!

The copyright of the article Training Cats to Change Undesired Behaviors is owned by Cheryl Weldon and permission to republish in print or online must be granted by the author in writing.

One method of training a cat