Tsutomu Yamaguchi is simultaneously regarded as the luckiest and unluckiest man in the world. Both of these reputations come from two moments in his lifetime in which he miraculously survived. Tsutomu Yamaguchi survived the blast of the first atomic bomb at Hiroshima only to travel back to his home in Nagasaki and survive the second blast. Not only that, but he overcame being exposed to exorbitant amounts of radiation to live to a ripe old age.

Yamaguchi led a relatively uneventful life in his youth. In the 1930's, he joined Mitsubishi Heavy Industries where he worked as a draftsman for designing oil tankers. He admitted in a book documenting his experience, called a Raft of Corpses, that he never thought Japan would start a war. Even after the war started, he continued work for Mitsubishi, but like many Japanese companies it suffered from scarcity of resources that were re-routed for the war effort. The oil tankers in which Yamaguchi designed were also sank in many bombing raids on the country. 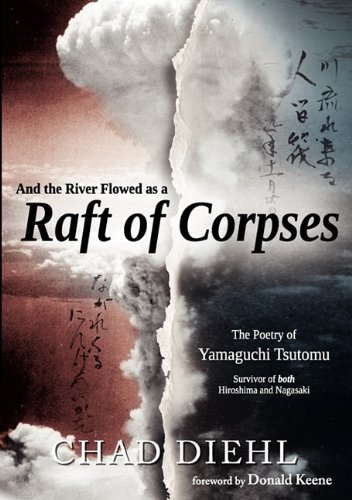 And the River Flowed as a Raft of Corpses: The Poetry of Yamaguchi Tsutomu, Survivor of Both Hiroshima and Nagasaki (English and Japanese Edition) Amazon Price: $12.50 $7.58 Buy Now(price as of Jul 9, 2015)
While Yamaguchi lived and worked in Nagasaki, in 1945 he was sent on a three month business trip for Mitsubishi Heavy Industries in Hiroshima. On August 6th, his two colleagues, Akira Iwanaga, Kuniyoshi Sato and himself were preparing to board a train to head back to back home. Yamaguchi, however, noticed that he forgot a stamp on his passport (a hanko) in which he needed for travel. He was walking back to the station when the Enola Gay dropped the Little Boy on Hiroshima. Tsutomu Yamaguchi saw a great flash and was blown to the ground. The Little Boy atomic bomb was dropped on the center of the city, just 3 kilometers from where he was walking.

The bomb blast left Yamaguchi seriously burned on the top of his body, temporarily blind and ruptured his eardrums. After recovering from the blast, he crawled into a nearby air raid shelter, where he found his colleagues who had also survived the blast. They spent the night in the shelter and traveled to Nagasaki the next day.

Yamaguchi received treatment for his wounds and took some time to rest. While most Americans take a whole week just to recover from the flu, Yamaguchi, clad in heavy bandages reported for work after only three days. Now that's some hardcore Japanese work ethic!

Around 11 AM, during a conversation in which Yamaguchi was explaining his burns to his boss and co-workers, who were in disbelief of how one bomb could decimate so much of Hiroshima, the bomber named Bockscar flew over the city and dropped the Fat Man atomic bomb on Nagasaki with impeccable timing. In a serendipitous event in this unlucky man's life, he was again put around 3 kilometers from where the bomb dropped. This time, though, Yamaguchi was left unharmed by the blast. However, his extensive bandages were ruined by heat and radiation. Since there were so many other burns and injuries from the blast, new bandages were difficult to come by. Because of this, his wound became infected and Yamaguchi suffered from a high fever for the rest of the week.

His life could have been significantly different if the Bockscar had dropped their Fat Man bomb on their original target of Kokura. However, it was cloudy over Kokura that day and the men of the Bockscar were not allowed to drop the bomb unless they could see the target. It was also cloudy over Nagasaki, but they were running out of fuel and took a chance.

Yamaguchi's wife also suffered radiation exposure from the black rain that fell over Nagasaki after the blast, but was also majorly unharmed. After the war ended, Yamaguchi served as a translator for occupying American Marines, then briefly became a school teacher. However, he later returned to work at Mitsubishi Heavy Industries.

Yamaguchi was officially recognized with other atomic bomb survivors in 1957 by the Japanese government, but only for the Nagasaki bombing. He was happy with this, as he had his health and was thankful for that.

He and his wife went on to have three relatively healthy children, though they all have some health problems that they blame on the radiation exposure of their parents. Both Yamaguchi and his wife Hisako lived long lives after their exposure to radiation. Hisako was ill on and off through her life before succumbing to kidney and liver cancer at the ripe age of 88.

Yamaguchi suffered from a variety of maladies throughout his life. The only permanent effect was the lost of hearing in his left ear. However, at a time he temporarily lost his hair and had bouts with other radiation related ailments like cataracts and acute leukemia. His burns took years to fully heal, his oldest child Toshiko remarks that she remembers seeing  her father in bandages until she was 12 years old. There was also the psychological trauma that he had to overcome. Surviving one blast to travel home and think it is over, only to have another blast hit. Most people would never feel safe again.

Yamaguchi never wanted to flaunt his double survivor status, as there were about 100 others who were also double survivors. Those others had significantly worse health problems than himself and none ever officially came forward to receive recognition. However, in 2009 shortly after he found out that he was dying of stomach cancer, Yamaguchi applied for double recognition, which was approved by the Japanese government. He is the only officially recognized survivor of both bombings on Japanese record. Yamaguchi is quotes as saying, "My double radiation exposure is now an official government record. It can tell the younger generation the horrifying history of the atomic bombings even after I die."