See a complete list of my featured articles here: "Featured Articles on InfoBarrel" If you enjoy writing and would like to earn money with your articles sign-up for InfoBarrel today!
InfoBarrel is a writing platform for non-fiction, reference-based, informative content. Opinions expressed by InfoBarrel writers are their own.
InfoBarrel > Technology > Internet

Have you ever been confused while reading a tweet? You're not alone, with all the abbreviations and symbols on Twitter, millions of Twitter fans have no idea how to interpret some of the Twitter terminology. Newer Twitter users don't understand the use of the hashtag (#) or how to retweet.

@: If you want to send a tweet to a certain person or let them know you mentioned them in one of your tweets, you must include the at sign "@" at the beginning of their account name. For example if you would like to send me a tweet, you can do so at: @DebW07

@reply: This is any update posted by clicking the "Reply" button on a Tweet.

#: Hashtag – Using this symbol organizes tweets or updates for Twitter search engine & to enable others to discover relevant posts. You may even change a hashtag in order to share the content with another Twitter chat community.

DM: Direct message; only you and the person who sent it can read.

HT: Hat tip - attributes a link to another Twitter user.

MM: Music Monday – Monday is the day designated for Twitter users to recommend songs or musical artists. The tweet contains the following; "#MM" and it is immediately followed by the recommended song or group.

MT: Modify Tweet – this means that you are changing/modifying a tweet prior to retweeting or the tweet you are reading has been modified from the original tweet. Placing square brackets [ ] in a tweet indicates that you or someone else has added or deleted an element of a tweet to offer another angle, challenge an assertion, or confer approval. If you are correcting a typo or factual error you would identify the tweet as "MT" and list the corrections in brackets [ ]. You should also flag the change to the original sender.

Mention: This is any tweet that contains "@username" anywhere in the body. (Note, @replies are also considered mentions.)

PRT: Partial Retweet – this means that the tweet you are viewing is a partial version of someone else's tweet.

TT: Trending Topic – these are the most mentioned topics or words posted by Twitter users during a specific time frame.

RT: Retweet – these are tweets that are being re-sent or retweeted. If you see an RT in a tweet it means the tweet you're looking at was forwarded to you by another user.

Trend:  A topic "Trending" or "popular" right now on Twitter 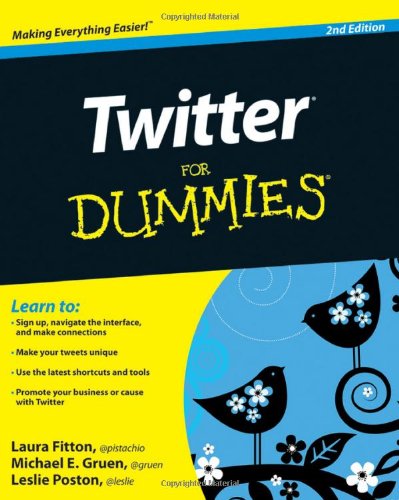 Twitter allows users to send messages containing only 140 characters. The following abbreviations let users say whatever they want and still remain within the limitations.

AB/ABT:  About
AFAIK: As far as I know

B4: Before
B/C: Because
BFN: Bye for now
BGD: Background
BH: Blockhead
BR: Best regards
BRB: Be Right Back
BTW: By the way

F2F or FTF: Face to face
Fab: Fabulous
FB: Facebook
Followers: People or groups who follow you on Twitter
FOTD: Find of the day
FWIW: For what it's worth
FYI: For Your Information

HAGN: Have a good night
HAND: Have a nice day
HOTD: Headline of the day
HT: Heard through
HTH: Hope that helps

IC: I see
ICYMI: In case you missed it (used when retweeting one of your own tweets)
IDC: I don't care
IDK: I don't know
IIRC: If I remember correctly
IM: Instant Message
IMHO: In my humble opinion.
IRL: In real life

NBD: No big deal
NC:  Nobody cares
NJoy: Enjoy
NSFW: Not safe for work
NTS: Note to self

OH: Overheard
OMW: On My Way
OOMF:  One of my friends/followers
ORLY: Oh, really

QOTD: Quote of the day

RE: Regarding
ROFL: Rolling on the floor laughing
RTQ: Read the question

TFTF: Thanks for the follow
TFTT: Thanks for this tweet
TJ: Tweetjack; joining a conversation belatedly to contribute
TL: Timeline
TLDR: Too long - didn’t read
TMB: Tweet me back
TMI: Too much information
TTYL: Talk to you later
TTYS: Talk to you soon
TY: Thank you
TYIA: Thank you in advance
TYT: Take your time
TYVW: Thank you very much
TX: Thanks

W or W/: With
W/E or WE: Whatever or weekend
WTV: Whatever

YGTR: You got that right
YKWIM: You know what I mean
YKYAT: You know you're addicted to
YMMV: Your mileage may vary
YOLO: You only live once
YOYO: You're on your own
YT: YouTube
YW: You're welcome

You can search for all of the tweets by a Twitter user by typing their username in the search box. Search for "@username" to view results.

Twitter users will only see @replies in their home timeline if they are following both the sender and recipient of the @reply.

Individuals with protected Twitter accounts are only allowed to send @replies to approved followers.

When a Twitter user sends an @reply to someone who is not following them, the @reply will not appear on your Tweets timeline, it will appear in the "Mentions Tab."

Next >> What Does It Cost To Start A Podcast?