Find more flapper costumes and gangster costumes on Amazon. You too can earn money from writing articles by signing up for InfoBarrel.
InfoBarrel is a writing platform for non-fiction, reference-based, informative content. Opinions expressed by InfoBarrel writers are their own.
InfoBarrel > Lifestyle > Holidays & Celebrations > Halloween

Here are two 1920s costume ideas, one for women and one for men, that are associated with the period that can be used for Halloween, New Year's Eve or a 1920s themed party.

One of the most influential events of the 1920s in the United States  was the Eighteenth Amendment to the United States Constitution - known colloquially as Prohibition - was first proposed in 1917. Once the 36th state had approved the amendment, it was ratified, and came into effect one year later on January 17th 1920.[1]

Credit: http://en.wikipedia.org/wiki/File:5_Prohibition_Disposal%289%29.jpgWhat Prohibition did was ban the sale, production, importation and transportation of alcoholic beverages. It did not actually ban their consumption although, given that it was illegal to make, sell or transport alcohol, this was a bit of a moot point, as there was no way of legally getting the alcohol to drink it.Prohibition remained in force until December 5th 1933 when it was repealed following the Twenty-first Amendment to the United States Constitution.

This is a term that was primarily used to describe the decade in the United Kingdom, Canada and the United States, and the behaviour associated with it was seen in major cities in those countries, but not solely in either those cities or those countries; Berlin, in particular, is strongly associated with the 20s.The rise in the popularity of jazz music and its association with the period led to it also being known as the Jazz Age, and there was also a rise in the popularity of dancing and the creation of dance clubs, which were also associated with jazz.In the US, illegal alcohol sales - just because alcohol was illegal didn't make people not want to drink it - led to the creation of speakeasies, where people could still satisfy their desire for an alcoholic drink. A good description of the period and some of the parties held can be found in the novel The Great Gatsby by F. Scott Fitzgerald.The decadence of the Roaring Twenties ended with the Wall Street Crash and the Great Depression when such excesses were no longer acceptable behaviour or, indeed, even affordable for many.[2]

The Flapper Costume for Women 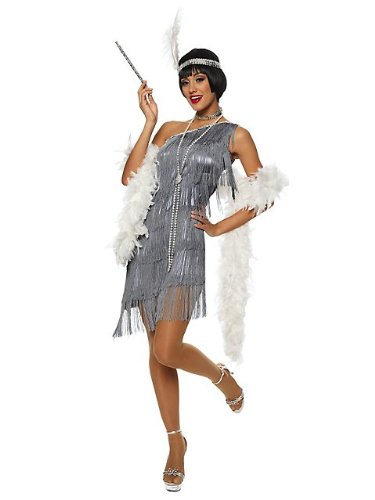 Credit: http://commons.wikimedia.org/wiki/File:Louisebrooks1.jpgThe look that was most associated with the 1920s for women was that of the Flapper. The term "flapper" pre-dates the 20s, and has had different meanings through its life; the most complimentary was its use to describe an excitable teenage girl; the least was it being used to describe those of negotiable virtue.By the 1920s the meaning had changed and was being used to refer to young women in the Western world who listened to jazz, wore too much makeup and clothes that were more revealing, smoked, drank, drove cars and approached relationships in a far more casual manner than had been considered to be acceptable in the past. They were also frequently active in a number of sports, and enjoyed dances like the Charleston; which were also considered to be quite shocking. The first use of the word in  this manner was in the 1920 film The Flapper.[3]

When it came to clothes, flappers wore straight and loose knee length dresses, which were frequently strapless, exposing their legs and arms, with stockings and garters, allowing them to "kick up their heels" when doing the popular dances of the time. High heels also came into vogue. Clothing was designed to create a more boyish figure by flattening the bust, rather than accentuating it like older corsets did, and a more boyish look in general, with a preference for shorter hairstyles, such as bob cut hair. The hair was designed to fit under hats such as the cloche, which was a close-fitting hat.Heavy makeup with kohl-rimmed eyes and blusher was worn on the face. For accessories, beaded necklaces, brooches, pins and rings done in the art deco style of the Twenties - which is described as having a rectilinear and symmetrical style - were popular.

One thing that is believed to have come about as a result of Prohibition was the rise and spread of criminal organisations such as the American Mafia and the Chicago Outfit, and the rise of the member of these organisations, the gangster, or mobster.[4]

With the sale and manufacture of alcohol being made illegal, yet there still being a demand for it, there became substantial profits in fulfilling that need, which resulted in organised bootlegging - the smuggling of alcohol into the United States. Canada was a primary source, as alcohol was legal there, with the booze smuggled across Lake Michigan to Chicago, which was the most notorious city in America when it came to organised crime, and Chicago's Al Capone the most notorious gangster. Chicago's proximity to the Canadian border, and its many travel connections to the rest of the continental United States, made it a focal point for the transport for illegal, as well as legal, goods.

The Gangster Costume for Men 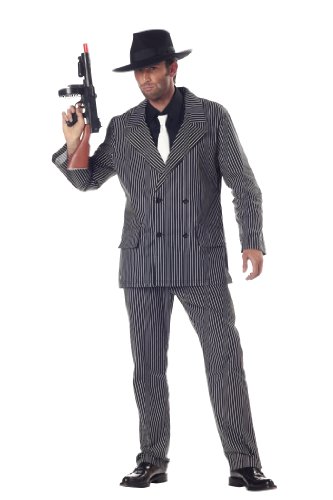 Credit: http://en.wikipedia.org/wiki/Mobster#mediaviewer/File:Edward_g_robinson.jpgThe mobster of the Twenties was well-dressed by many standards, certainly in comparison to today. He wore a suit and tie, possibly a three-piece suit with a vest, or waistcoat, but two pieces were also popular. Hats were still considered to be an essential element of the male wardrobe, and the style that is most linked to the image of the mobster, especially through films, was the fedora, a hat with a brim that was creased lengthwise at the crown.The most important accessory for a man's 1920s gangster costume is the Tommy gun, an American-made gun properly known as the Thompson submachine gun, which is heavily linked to the gangsters of the 1920s, although it was also used by law enforcement in the US in the same period, especially the distinctive drum magazine variant, even if that variant was not one that was hugely popular with military users, due to the weight, bulkiness, noise and fragility.The sheer firepower and capacity of the drum magazine made it useful where intimidation was an important consideration, and it primarily found popularity with non-military users, on both sides of the law. 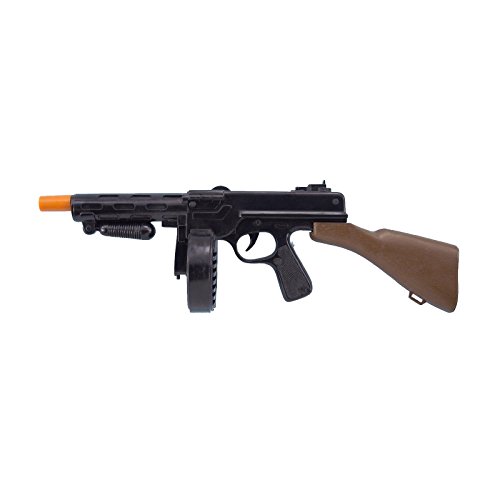 Jeepers Creepers! - How to Decorate Your Yard to be the Scariest on the Block