Americans love beef.  They love to cook it and proudly share it with friends, family and neighbors. But there is one cut of meat that any cook who considers themself a master of BBQ must learn to perfect - the brisket.

Brisket stories and recipes are shared often as every man with a smoker in his backyard tries to perfect his brisket recipe.  But this is a unique cut of meat with a unique science to its preparation.  And the first step to perfecting brisket is to really understand the cut of meat and what the benchmarks are for cooking it.

What is a brisket?

The brisket comes from the chest of the cow.  More specifically, the brisket is made up of a cow's pectoral muscles.  The pectoral muscle in cattle is extremely important.  Unlike upright humans, who only use the pecs to lift themselves from the ground or to push away from an object, cattle engage their pectorals nearly 100 percent of the time that they spend standing on all fours.  And without skeletal support (cattle have no collar bones), the muscle that makes up the brisket must support more than 50 percent of the animals weight at all times.  Thus, the pectoral muscles in a large cow is made up of a high percentage of intricate connective tissue. This fact leads to need for a very specific cooking method.

Parts of a brisket

A full brisket is made up of two parts - the cap and the flat.  The cap is located on the top of the cut and contains a large percentage of fatty tissue.  The flat, located beneath the cap, is far leaner and tied together with a high percentage of connective tissue.  If cooked correctly, the fat content within the cap will moisten the flat and prevent the flat from drying out.  This is an essential point to understand when cooking a brisket.  Often stores or meat markets will sell brisket flats without the cap.  When attempting to cook brisket correctly, and assure moisture within your final product, cooking a full brisket cut will almost always produce better results than cooking the flat alone.

Okay, here are the nuts and bolts to cooking a perfect brisket.  There are some varying methods to achieving these results, but there are some basic rules that all great BBQers will agree upon.

1) Season your meat - A brisket rub is generally made up of the spices that are commonly used with beef - garlic, salt and pepper.  But there are several additional spices that can be used to augment a basic seasoning.  Try mustard, onion, paprika, sugar, cayenne, or cumin.  After preparing the mixture, dust the meat thoroughly before cooking.  Don't rub the spices into the the meat.  This will clog the pores and prevent them from opening during the cook.

2) Inject - This is an optional step.  An injection can be made up of a combination of beef stock, oil, or perhaps fruit juice.  But the goal is simply to add additional moisture that might expand the time that your flat will remain moist.

3) Cook - I will just give you a basic method for cooking.  Set your smoker to 220 degrees and establish a steady temperature.  Place the brisket in the center and make sure to avoid hot spots that will cook a portion of the meat faster.  Put a large amount of wood in the smoker for this early cook.  This is the time to establish your smokey flavor.  I prefer hickory, but some cooks like mesquite or oak.  Leave the brisket to cook for several hours without checking on it very often.  Every time you open the lid of your smoker, you're disrupting the cook and requiring the smoker and meat to work to return to the equilibrium you had established.  The general rule-of-thumb is to cook the meat around 1.25 hours per pound. But this rule only gives you a framework to measure the benchmarks of the cook.  Temperature is the real key to a proper cook.  So, if your smoker is running steady and holding temperature, you will not need to check on your brisket until around 8-10 hours into the cook.  At this point, put your meat thermometer into a few spots on the brisket.  Hopefully, you have a very nice bark developing on the meat and your meat temperature is heading into the 165 to 185 range. If you like your bark, now is the time to wrap the brisket in foil to retain moisture.  If your bark is not dark and crusty like you had hoped, you can allow the brisket to cook unwrapped for a while longer.  Wrapping a brisket in foil is merely an attempt to retain moisture.  In fact, if your brisket is retaining moisture, then wrapping it in foil can negatively affect the final product due to the steaming that takes place while wrapped. This can lead to a mushy result, or a brisket that falls apart.  This is a very important portion of the cook.  This is your window to get it right.  And it is all about temperature and touch.  This is the period in the cook when the connective tissue turns to gelatin and the meat becomes tender.  This also the period if left on the cooker for too longer that the gelatin (a.k.a moisture) will be cooked out of the meat.  Every hour, from this point on, open your smoker for just long enough to take a temperature reading.  When you've reached 195 to 200 degrees, you are in the pocket.  If your thermometer slides in and out of the meat with no resistance, the brisket is done.

4) Rest - When I mention rest, I don't mean you.  Yes, it has been a long cook, but I mean the meat needs to rest.  If you've foiled the meat, remove it from the smoker, place on a nearby table, open the foil and let it steam out.  After it has quit steaming, re-wrap it and place in a thermal unit that holds temperature.  A camping cooler or Cambro unit are best for storing the meat while it rests.  Go prepare the rest of your meal, your brisket will be ready whenever you are.

5) Serve - When serving your brisket always remember to slice across, not with, the grain of the meat. This will produce long delicious portions like the those in the image above. 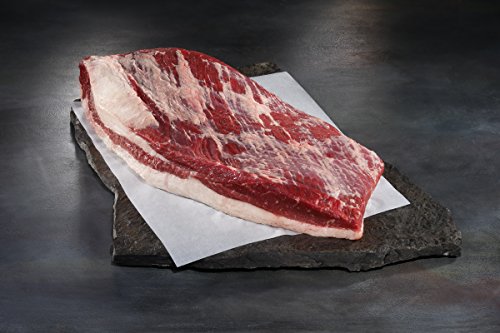 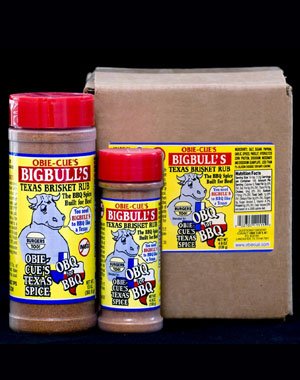