There is something sophisticated or sinister about a white cat, depending on the breed and your television history!  Many of us have instant associations with white cats from TV shows and movies as well as a number of assumptions about the health of white cats.  Here we look at understanding white cat breeds and what makes them different.

Are they all deaf?

One of the first assumptions is that all white cats are deaf but this isn’t the case.  The problem with deafness comes in most commonly in white cats that have blue eyes.  A cat is white because they have a certain dominant gene that masks the effects of all other genes relating to colour and means that the only colour they can produce in their coat is white.

It is shown in genetics as W and a non-white gene is shown as w.  Therefore is a cat inherits two sets of W genes (called homozygous) they will be all white.  If they received Ww from their parents, they will also be white because W is dominant to w.  But a ww genetic mix will produce a non-white cat because the dominant W gene is missing.

The next factor is eye colour which may be blue, non-blue (commonly gold or copper) or odd (one of each colour).  Blue eyed white cats are more likely to be born deaf than any other cat, including those with odd colours eyes.  It comes from a developmental fault when they are in the womb that results in this deafness.  In addition, if an odd eye cat is deaf, it will be on the side of the blue eye.

The breakdown of the likelihood of a blue eyed white cat being deaf is as follows (based on a study of 185 cats):

If you think your cat may be deaf, seek out a vet who will normally conduct a BAER test.  This means a ‘brainstem auditory evoked response’ and tests the electrical activity along the hearing pathways as well as the cochlear.

What is an albino?

The gene that causes a cat to be born an albino is different from the W gene that makes them white.  Albinism happens when the coat has a reduced number of pigment cells, called melanocytes, compared to a non-albino cat.  In a full albino cat, the eyes are pink while a part albino will have pale blue eyes.

There are different genes in different breeds of cat that cause albinism and are demonstrated differently when their genetic makeup is described.  These are

Whenever a capital letter is used, this gene is dominant to the other genes, while a lower case letter indicates a recessive gene.

White cats can be sunburned and therefore are at a higher risk of skin cancer.  This means that their exposure to sunlight should be monitored and reduced at times of highest UV exposure.

If they are deaf, this also makes them very vulnerable outside the safety of the home to dangers such as attacks from other animals and encounters with cars.  They should be kept inside the house most of the time and if let out, kept on a leash for their own safety.  Don't forget that house cats will need items such as a scratching post and a litter tray to avoid nasty accidents and the ruining of the household furniture. 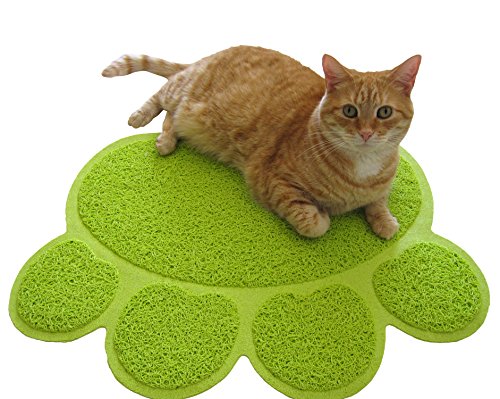 Two MeowsÂ™ Cat Litter Mat & â˜…FREEâ˜… eBook ~ Litter Trapping Mat For Cats â˜…100% Money Back Guaranteeâ˜… Fun Large Bright Green Paw Shape ~ Litter Mat With Scatter ControlÂ© Amazon Price: $23.99 Buy Now(price as of Nov 18, 2014)
This kind of item works well for indoor cats beside the litter tray to help ease the mess that nearly always occurs around the tray. Cats also seem to enjoy interacting with it and this will apply to deaf cats as much as any other. They all still love to knead things.

The following breeds are recognised in a white form:

Most of the time if you adopt a white kitten or have one born in a litter of kittens, they will not be deaf and will live a normal and full life.  However should your white cat be one of the ones suffering with deafness, then a few simple precautions will allow them to live a nearly full life and reduce the time you spend worrying about them too!