This article is a work written for the average layman. To let the uninformed know about this available rarity, depicting United States numismatic history from 1793 through 1857.

If you take some time and walk through the different design changes and size adjustments you will learn of public out cry and government response. You will learn of commodity shortages in the early days of the United States. There is information contained in the life of each variety, full of insightful facts about the people that carried, spent and saved these large copper coins.

In 1792 the United States congress authorized the coinage to begin with half cents and large cents. The large cent was to weigh exactly twice that of the half cent. In early 1793 designs were finalized and striking began on primitive presses. Hand cut dies were used and each die was easily identified because they were each made by different craftsman and no 2 are alike. Collectors have resources available today to identify each combination of reverse and obverse dies. There is a number for each of these combinations.

These coins have been avidly collected for centuries. The collector base has now exploded with the invention of the Internet. Investors have also entered the market and available examples are becoming very hard to find. Some of these coins are over three hundred years old and were produced in very short mintages. Many have been lost or destroyed and the ones that did survive are viscously bid for on auction sites both in the virtual world and the brick and mortar coin stores. 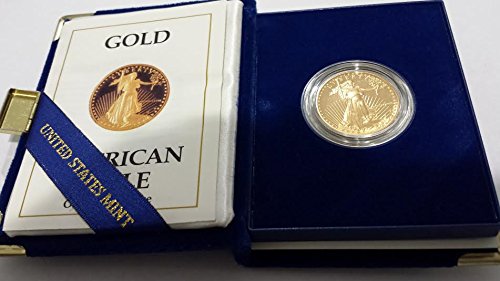 1/2 Oz Us American Gold Eagle Coin PCGS MS 69 Amazon Price: Buy Now(price as of Nov 24, 2016)
If you are considering starting a collection of large cents then the focus should be put into finding a range of years or type, that your budget will possibly be able to complete.

If you try to collect the 1700 coins then the 1793 could use up all your money. Thousands of dollars for this coin alone keeps most of us from collecting a complete year set of these coins.

Coronet head large cents are a good place to focus a collection. These coins are still available in uncirculated condition with a hardy search, for around 500.00 They can be purchased on eBay in circulated condition for under twenty dollars. A set can be put together within the reasonable price range most can handle.

Braided hair large cents are even more inexpensive and a great place for the beginning large cent collector to focus. This variety of large cent was minted from 1840 through 1857 and ended the United States large cent run.

Collectors can obtain an uncirculated example of this type for several hundred dollars. A very nice investment indeed as these will be drying up very quickly. Always buy the highest grade you can afford as they appreciate from the top down. In other words the uncirculated coins will go up first. When they start to get to expensive people settle for a lesser grade. This then raises the demand for that grade and so on and so on. If you have the best coin you reap the rewards first.

Some key dates to try to obtain first if possible are the 1804, 1799, obviously the 1793 and any other coins from the 1700s these are going to be the hard dates for you to fill. If your attempting to fill a complete set of large cents by year, you'll need to make sure you can afford these coins first. No sense buying all the others to leave the set incomplete when you get to the hard years.

If you purchase these coins in the best grade you can afford, then you'll know you will be able to keep the lower priced coins that follow to at least the same grade. This makes for a nicely matched set and brings a much higher price if you do decide to sell.

Some people collect US large cents to have a hobby, some will do it for investment. Whatever the reason you collect, United States numismatics will lend a voice to history. Hopefully with this piece a few more people will be joining the numismatic collectors club, interested in United States large cents.